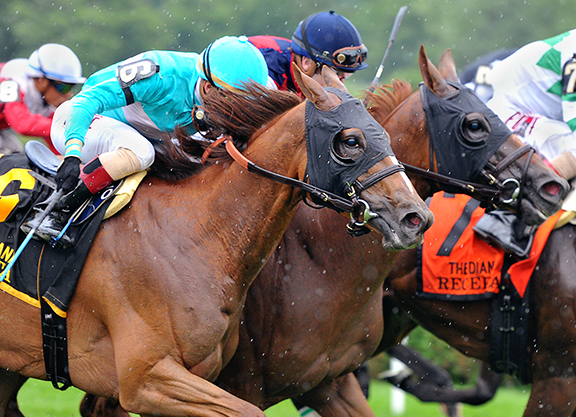 An intentional breeder is a student of their broodmares, diligently studying each mating and the resulting offspring while adjusting and making inferences at every corner.

Over the past seven years, the Don Alberto Corporation has meticulously analyzed each foal produced on their growing Kentucky-based farm and has endeavored to make each mating more successful that the last as they continue to learn from their elite broodmare band.

“The engine has started working,” Don Alberto’s Executive Director Fabricio Buffolo said. “We know the mares and know more about how they are producing. We are getting better matings because we know what we can do with them.”

Buffolo said that this year, two crosses in particular have proven to be successful–the mating of Chilean-bred millionaire Dacita with Quality Road, and of Grade I-winning maiden mare Salty with Tapit.

Dacita is a daughter of Scat Daddy, and is the leading earner for her dam Daja (Chi) (Seeker’s Reward). She was a dual champion in Chile before moving to the United States and into the barn of top turf trainer Chad Brown as a 4-year-old. She raced for three years in the States, claiming four graded stakes including two Grade I races in the Diana S. and Beverly D. S.

As fellow Chilean natives, the Don Alberto team had a strong attraction to the millionaire earner.

“Dacita is very dear for all of us because she raced in Chile,” Buffolo said. “She won Grade I races there, including the Chilean Oaks, and when she came here she had a long campaign, running until she was six years old.”

The chestnut mare was purchased by Don Alberto at the 2017 Fasig-Tipton November Sale for $1.85 million. Last year, Dacita had her first foal, a colt by Uncle Mo and was bred back to Quality Road. The resulting filly was born in January of this year, and Buffolo said their team is very happy with the result of the mating.

Buffolo also added that they had picked the mating in hopes that the offspring could be competitive on dirt or turf.

“Quality Road is a horse that could go either way,” he said. “He can have good runners on the grass and the dirt. And although Dacita was a turf runner, we know that Scat Daddy could do it all.”

Don Alberto liked Dacita’s second foal so well that the mare is now back in foal to Quality Road for next year.

A year after they purchased Dacita, they found another Grade I winner up for grabs in the Fasig-Tipton sales ring in Salty.

Produced by the stakes-placed Dixie Union mare Theycallmeladyluck, Salty broke her maiden second time out as a 3-year-old, and then won the GII Gulfstream Park Oaks when making her stakes debut in her next start for trainer Mark Casse. She placed in three Grade Is later that year before claiming her first Grade I in the 2018 La Troienne S. in her final career start. Among those behind her was Eclipse champion Abel Tasman (Quality Road).

Buffolo said he can easily recall initially seeing her at the sale.

“I remember very well the day that I first saw her there,” he said. “I was standing beside Leif Aaron from Juddmonte, and when we saw her, I was just like, ‘Wow.’ She was a beautiful individual, just gorgeous.”

Buffolo passed on his findings to Don Alberto’s Carlos Heller Solari, who also fell in love with the imposing bay filly.

They purchased Salty for an even $3 million, and bred their new addition to champion sire Tapit in 2019.

After the resulting filly was born in January of this year, Buffolo said that Salty was well worth the hefty price tag.

“We have an outstanding Tapit filly,” he said. “She’s just class. She’s very pretty, very feminine. She’s refined, and has almost an Arab-like head, but is a really good size. We were rewarded; Salty gave us a very pretty filly.”

Buffolo reported that the youngster has a sweet charm to go along with her quality physical.

“She has an incredible personality,” he said. “Every time somebody comes here to take pictures, she’s always the first one to come to you. She’s very inquisitive and has a curious mind. She wants to be with you. Even if you’re trying to take pictures of the other foals, she comes up behind you and is always trying to be with people.”

As the auspicious young fillies continue to develop, plans are formulated as to where they could end up.

“We will enter all of them [into a sale] as yearlings,” Buffolo said. “We will assess them one by one as we get closer to the deadlines. We’re not sure yet, but some we might retain.”

While the number of horses on the farm continues to grow, so too does the farm’s acreage. Since the original purchase of Vinery, they’ve added 400 acres from the adjoining Crestwood Farm, and recently, they also bought a portion of the nearby Hill ‘n’ Dale property, and look to receive more acreage later this year.

“We’ve grown a lot in the last few years,” Buffolo said. “For us, three, four, or five years seems like a lot of time, but in this industry it’s not. It takes a long time to get to know the good mares, to know how they are producing, especially when we bought a lot of maiden mares. You really need to learn what they are producing and adjust your matings accordingly so that you can make a plan for the future.”