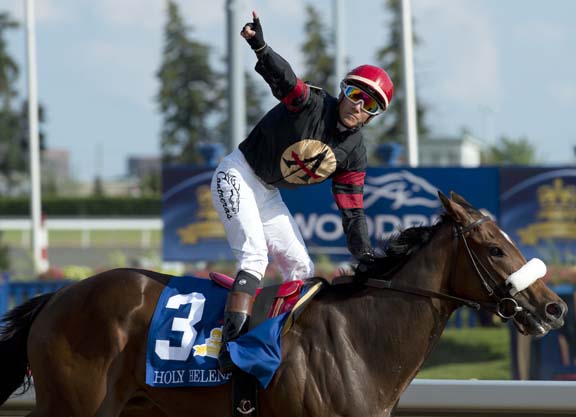 Stronach Stables’ Holy Helena (Ghostzapper) became the seventh filly to complete the Woodbine Oaks/Queen’s Plate double with an effortless score over the boys in the 158th renewal of the Canadian Classic Sunday in Ontario. The filly was the fourth Queen’s Plate winner for Stronach, following most recently 2015 winner Shaman Ghost, who is also by the stable’s 2004 GI Breeders’ Cup Classic winner Ghostzapper. Ghostzapper, in turn, is a son of Stronach’s 1997 Queen’s Plate winner and 1998 GI Breeders’ Cup Classic winner Awesome Again.

Holy Helena is a third generation for Stronach’s Adena Springs, making the result even more gratifying for the Austrian-born owner.

“I put a lot of time in and a lot of effort in [the breeding],” Stronach said. “And naturally you can put all the money and do everything great, but you still need some luck. Today, the Holy Spirit gave us his blessing.”

Holy Helena, sent off the 2-1 Queen’s Plate favorite, had a slight stutter step at the break, but recovered quickly and had the lead in the early strides. She ceded her advantage going under the wire for the first time and settled into a stalking position as State of Honor (To Honor and Serve) took the field through fractions of :24.17, :48.67 and 1:13.23. Holy Helena loomed a threat while rallying three wide on the far turn and, while Megagray (Langfuhr) took over from State of Honor at the top of the stretch, his advantage was short-lived as Holy Helena stormed to the lead and soared clear for a four-length victory.

Holy Helena, a debut second sprinting 6 1/2 furlongs at Aqueduct Apr. 15, graduated with a hard-fought 3/4-length tally when stretched to 1 1/16 miles at Belmont May 12. She earned a start in the Queen’s Plate with an authoritative one-length victory in the June 11 Woodbine Oaks.