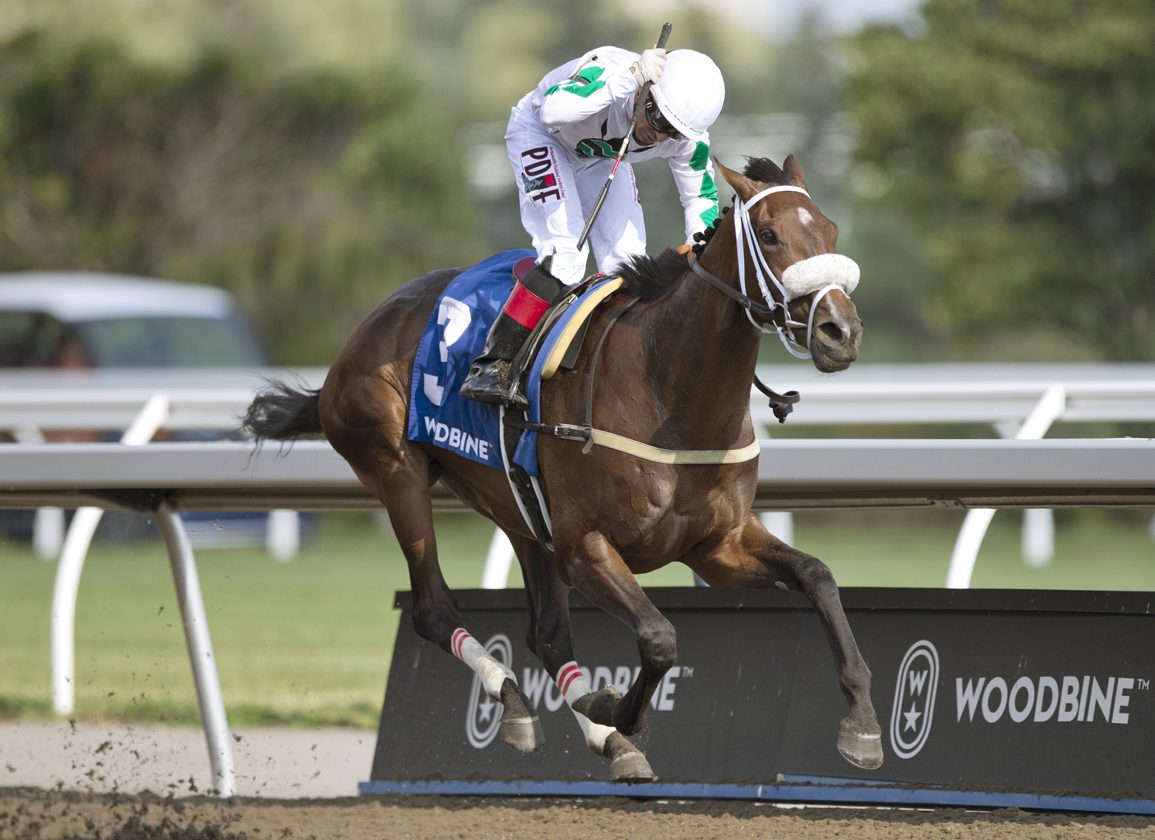 Moira looped the field impressively en route to a dominant score in Sunday's Woodbine Oaks, providing trainer Kevin Attard with a second-straight win in this event and adding to a long list of accomplishments for her ownership group. And she did it all without her hind shoes, having acted up in the paddock and been unable to be adequately re-shod in time.

An impressive debut graduate from out of the clouds in the C$250,000 Princess Elizabeth S. here last October, the bay settled for second as the favorite in the GIII Mazarine S. Nov. 28. She resurfaced in the seven-panel Fury S. for Ontario-breds June 11, and got the job done narrowly over Pioneer's Edge (Pioneerof the Nile). Looming large here on the stretch back out to two turns and with $1.6-million New York-based, Chad Brown-trained maiden Sahlabiya seemingly the main danger, the dark bay was unhurried early while saving ground. She was guided off the fence a bit and ridden to keep pace down the backside. Rider Ramon Hernandez hit the gas early and split horses into the home turn, and Moira blew past Sahlabiya like she was standing school before running up the score in a time that was nearly a second faster than the boys went in the Plate Trial two races earlier.

“She was push button in the first turn,” said Hernandez. “We just sat there and saved as much ground as we could and made our move down the backside. I knew horses were going to be stopping in front of me, so I just tried to get her away from them. By the three-eighths, I was already where I wanted to be. Turning for home, I just talked to her and said, 'Come on Moira, it's all about you. Go get it.' And she just exploded. I have to give a lot of thanks to this excellent group, the owners, for giving me an opportunity to get back on this amazing filly. From the first day I got on in the morning I was impressed. Today, she showed up. She just played with the rest of the field.”

Of the pre-race incident, trainer Kevin Attard said, “It was crazy. You know, she's always been a little bit kind of antsy in the paddock. We school her a lot and she just kind of had a little episode and unfortunately stepped on her hind foot and kind of knocked off the one shoe and kind of bent the other shoe. The paddock blacksmith tried to adjust it and fix it. I appreciate his effort. So, we elected to run her without the hind shoes. I wasn't too concerned with it being a synthetic surface. But obviously you're not accustomed to doing it, so it's always a little bit in the back of your head anyways. She's a class horse and I've always thought highly of her, and she obviously ran to that today.”

Moira, named for the character Moira Rose from the Canadian sitcom Schitt's Creek, acted up once more for good measure as her picture was being taken in the winner's circle.

While fillies have a particularly stellar record in the first leg of Canada's Triple Crown, top bloodstock agent and Montreal native Donato Lanni–the organizer of X-Men Racing–would not yet commit to the Aug. 21 Queen's Plate.

“It's going be up to her and Kevin,” Lanni said. “It may be great to run in that race again. Fillies have won it before, but we're just so lucky to be here today. So, let's take one race at a time and thank you for Woodbine. You do a great job here and it's a great place to come.”

The winner has a 2-year-old full-brother named Runaway Charlie and her dam fetched $400,000 back in foal to Ghostzapper at the 2020 Keeneland November sale. Devine Aida–a stakes winner on both dirt and turf–lost that foal of 2021, but produced a Sir Prancealot (Ire) colt this term. She is a daughter of the speedy GSW Passion (Came Home).