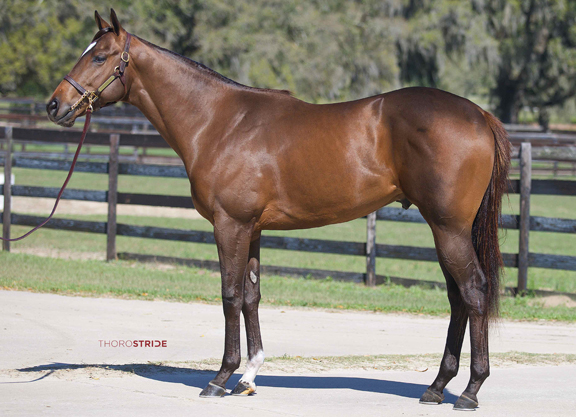 6th-Del Mar, $55,500, Msw, 8-29, 2yo, 6f, 1:11.10, ft.
VITTORIO (c, 2, Ghostzapper–Roberta Turner, by Smart Strike) was away slowly from a wide stall in his Aug. 1 debut, then traveled very awkwardly, covered ground on the turn and could do no better than fifth to the impressive odds-on favorite Freedom Fighter (Violence). But the betting public did not lose faith in the colt and made him the 11-10 favorite to make the requisite improvement at second asking. Much more smoothly away from gate six with Mike Smith back at the controls, the scopey bay colt moved better and sat just off of longshot pacesetter Belmont Bill (Oxbow) through an opening quarter in :22.46. Ridden quietly on the turn just awaiting his cue, Vittorio was allowed to stride into the lead three-sixteenths from home and was never in serious danger from there. He had 3 1/4 lengths on Belmont Bill at the wire. A $250,000 Keeneland September purchase last fall, Vittorio was knocked to Ben McElroy, agent for Kaleem Shah, for $750,000 at this year's OBS June sale after breezing an eighth of a mile in :9 4/5. The winner's dam is also responsible for Vittorio's year-older half-brother Seiche (Super Saver), who was third in an Aug. 15 Del Mar maiden; a yearling Hard Spun filly and a filly foal by Union Rags. Roberta Turner is a half-sister to MSW & MGSP Foxy Danseur (Mr. Greeley), the dam of GSW Ever So Clever (Medaglia d'Oro), an additional pair of stakes horses and the 2-year-old filly Willful Woman (Nyquist), who cost $400,000 as an FTSAUG yearling last summer and is now in training at Churchill Downs. Roberta Turner was most recently bred to Street Sense. Sales history: $250,000 Ylg '19 KEESEP; $750,000 2yo '20 OBSAPR. Lifetime Record: 2-1-0-0, $34,100. Click for the Equibase.com chart or VIDEO, sponsored by Fasig-Tipton.
O-Kaleem Shah Inc; B-Stonestreet Thoroughbred Holdings LLC (KY); T-Simon Callaghan.