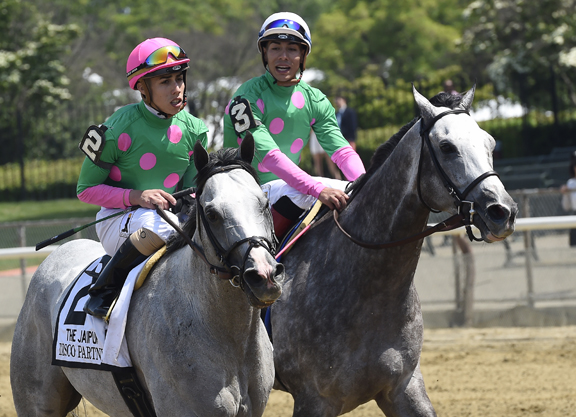 “On behalf of our Board of Directors, we are proud to honor each of these noteworthy individuals for their contributions and service to the New York racing and breeding industry,” said NYTB President Tom Gallo. “Each one of them has made significant efforts as owners, breeders and administratively helping to make New York the best and most lucrative state-bred program in the country.”

The honorees will be recognized at the NYTB's annual awards event, to be held virtually Monday, Apr. 5, at www.NYTBAwards.com. New York-bred divisional champion and the state-bred Horse of the Year will also be announced at the ceremonies.

Patricia and Frank Generazio, who passed away at the age of 91 last November, have campaigned the likes of Disco Partner, Discreet Marq, Pure Sensation and Presious Passion, to name a few of their standouts.

“We've always been big supporters of the New York-bred program and will continue to breed in New York year-round,” said Patricia Generazio. “Frank always selected our breedings, and he loved the New York-bred program. I'm very thankful and appreciative to receive this award on behalf of both of us. His loss still hurts and our stable will be reduced substantially, but we already have many Disco Partner babies and we will continue to have a presence in New York.”

Bongard, who died last December at the age of 77, was the daughter of the late attorney Bertram F. Bongard, who played a key role in the formation of the New York State Thoroughbred Breeding and Development Fund and New York Thoroughbred Breeders, Inc. Bongard and her sister Barbara owned Rojan Farms in Pine Plains, NY, before moving to Northumberland near Saratoga Springs.

“She would definitely appreciate this,” said Barbara Bongard. “She's certainly done a lot for the New York-bred program. I like to say our father started our family's influential success in the industry and Ellen took the reins and continued on. We're thankful she's receiving this recognition.”

Cannizzo served as the NYTB executive director for nearly 13 years before leaving that position to join the New York Racing Association.

“New York's breeding industry has flourished in recent times and I feel very fortunate to have played a small role in that success story,” said Cannizzo. “I'd like to thank the NYTB Board of Directors for their commitment to those working every single day on the 250 farms throughout New York. The success of the state-bred program comes with the tireless efforts of so many stakeholders.”