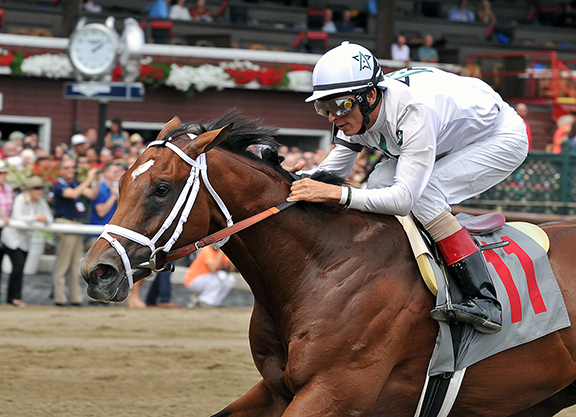 3rd-SAR, $83,000, Msw, 7-30, 2yo, 6f, 1:09.80, ft.
+THEORY, c, 2, Gemologist
1st Dam: Gem Sleuth (SP, $138,117), by Officer
2nd Dam: Gem Treck, by Java Gold
3rd Dam: Tallahto, by Nantallah
Theory was hammered down to 3-5 favoritism after drawing in off the also-eligible list and ran to those odds with a “TDN Rising Star” worthy performance. Bursting from the gate, the bay dueled Tale of Silence (Tale of the Cat) through a swift opening quarter in :22.38. The Todd Pletcher trainee took control as they hit the half in :45.49 and it was all over from there as he rolled home to an effortless 5 1/2-length victory over Reckling (Dialed In), becoming the second winner for his freshman sire (by Tiznow). These connections were also represented by a winner here last Saturday in first timer One Liner (Into Mischief). Picked up for $120,000 at the 2015 Keeneland September sale, Theory brought $335,000 at OBS April after breezing a quarter in :10. His SP dam produced a Paynter filly earlier this year and was bred back to GI Traver S. dead-heat winner Alpha. Lifetime Record: 1-1-0-0, $49,800. Click for the Equibase.com chart or the free Equineline.com catalogue-style pedigree. VIDEO, sponsored by Fasig-Tipton.
O-China Horse Club & WinStar Farm LLC; B-Fred Hertrich III & Ronald Kirk (KY); T-Todd Pletcher.