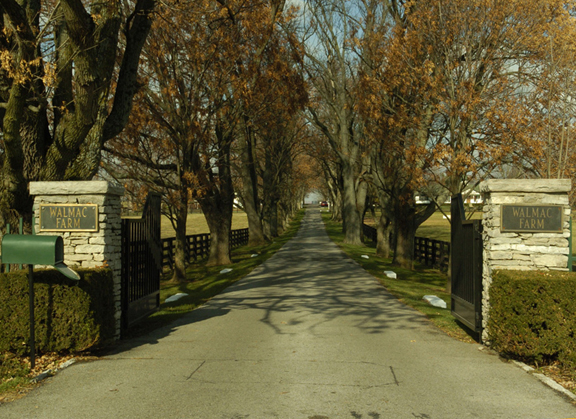 Looking to shift his focus from the racing to the breeding side of the sport, owner Gary Broad was the winning bidder when historic Walmac Farm was auctioned off Wednesday. Broad’s winning bid for the 248-acre property that sits about six miles from the center of Lexington was $4.8 million.

Walmac was founded by John T.L. Jones Jr., and stood numerous top stallions throughout its history, including Nureyev, Miswaki, Successful Appeal and Alleged. In 2016, it was announced that, as part of consolidation process, Walmac was putting its main property up for sale and shifting its operation to a smaller farm near the Fayette/Bourbon County Line.

“The auction was very well publicized and marketed well. There were a lot of people at the auction and it brought fair value. Gary was very happy to be the purchaser and looks forward to making improvements and bringing the farm back to very good condition.”

Biederman said since Walmac has not been in operation since 2016, Broad will need to make an investment to refurbish parts of the farm.

The new Walmac will operate differently than the old Walmac. According to Broad’s advisor Shannon Potter, Broad has no intention of standing any stallions there.

“Gary wanted to branch out and get into the commercial breeding game, so he didn’t buy this for stallions,” he said. “That’s not the plan. He strictly wants to be a commercial breeder.”

Potter said Broad currently owns about 15-20 broodmares and will be looking to buy more and improve upon the quality he already has.

“We’re going to cull some of the ones we already have and really start to get better quality and go about raising quality babies,” he said. “The goal is to have 25 to 30 broodmares. He’s wanted to have his own broodmare operation for a while.”

Potter, who is also the CEO of Town and Country Farm, said Broad wasn’t necessarily expecting to buy Walmac, but felt the price was too good to pass up for such an historic facility. He added that it has yet to be decided whether or not Broad will rename the farm.

“We looked at quite a few farms and we weren’t necessarily looking to buy this one,” he said. “But we just thought the location is outstanding and there have been so many good horses raised here. We know the ground is good, the soil is good. When it came up for auction, we were there just to see what it would bring and it brought a figure we thought was fair and Gary was willing to jump all over it.”

Town and Country is owned by Kiki Courtelis, who has owned horses in partnership with Broad. According to Potter, Broad will rely on Courtelis’s knowledge to help him rebuild Walmac.

With the shift into the breeding side of the business, Broad will begin cutting down on the number of horses he currently has in training. Potter estimated the Broad stable consists of about 50 to 60 horses.

“The plan is to cull what he has at this point in time,” Potter said. “It’s not something that will be done quickly, but, yes, there will be a culling process. He will continue to race, but will probably have no more than 10 or 15 horses. Some could be our own homebreds.”