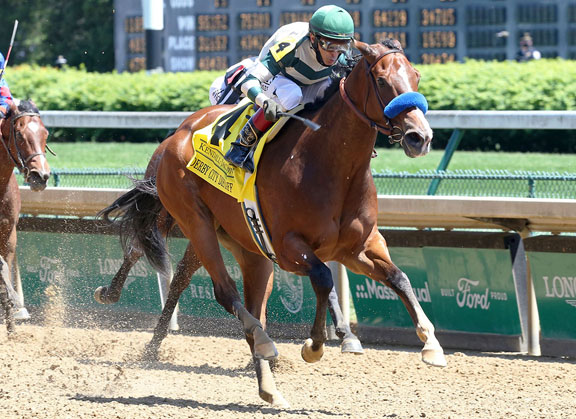 Last year's GI Breeders' Cup F/M Sprint winner and Eclipse champion Gamine (Into Mischief) looms large in Monday's GII Great Lady M S. at Los Alamitos. The Bob Baffert-trained 'TDN Rising Star' has been perfect in two tries this year–she bested stablemate Qahira (Cairo Prince) by five lengths in Santa Anita's GIII Las Flores S. Apr. 4, and was a facile winner of the GI Derby City Distaff at Churchill May 1 ahead of three next-out stakes winners. The $1.8-million Fasig-Tipton Midlantic topper figures to be extremely tough to beat and will be a very short price, but she still faces some formidable foes, particularly a pair from John Sadler and Hronis Racing.

Edgeway (Competitive Edge) is four-for-six and has never been off the board, having paired up 94 Beyer Speed Figures in a Santa Anita optional claimer in February and the Carousel S. at Oaklawn Apr. 10. She defeated MGSW Frank's Rockette (Into Mischief) in the Carousel. Edgeway's stablemate Candura (Into Mischief) was also last seen in Hot Springs. A debut-winning juvenile at Del Mar, the now 5-year-old missed all of 2019 and 2020, but shook off the rust to annex a pair of optional claimers in April.