Game On In Paris 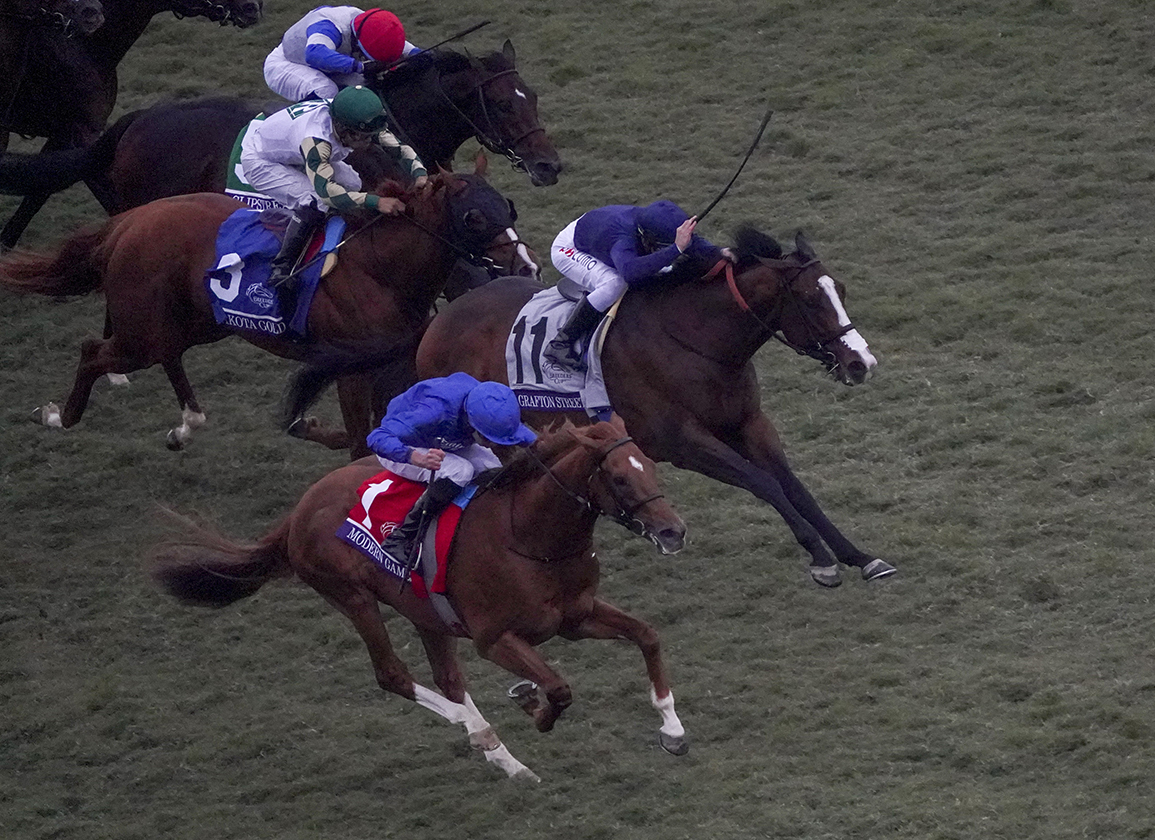 Given how powerful Ballydoyle has become since the late 1990s, it is perhaps surprising that Aidan O'Brien has pulled off the English-French-Irish 2000 Guineas treble only once with the duo Rock of Gibraltar (Ire) and Landseer (GB) sharing the spoils between them in 2002. No other stable has made inroads into this unique annexation of the three major colts' mile Classics, but 20 years later Charlie Appleby stands on the brink after Coroebus (Ire) (Dubawi {Ire}) provided him with a breakthrough first Newmarket Classic at the end of last month. If Modern Games (Ire) (Dubawi {Ire}) prevails in ParisLongchamp's G1 Emirates Poule d'Essai des Poulains on Sunday, the achievement is well and truly in reach for Native Trail (GB) (Oasis Dream {GB}) to complete in Saturday's G1 Irish 2000 Guineas. Interestingly, in 2002 O'Brien also had the one-two in the 2000 Guineas so there is direct recent historical precedent.

Coming to the fore with wins in Newmarket's G3 Tattersalls S. and the GI Breeders' Cup Juvenile Turf at Del Mar, with the latter contest marred by his bizarre scratching and reintroduction to the field, Modern Games has vital experience of travelling overseas and the hustle-and-bustle of a top international prize. “Modern Games has done well from two to three and I can't fault his preparation,” his trainer said of the likely favourite who occupies the box of one of Dubawi's best in Ghaiyyath (Ire). “We are very happy with his draw in stall four and there should be no excuses.”

Monaco's Formula 1 driver Charles Leclerc needs no introduction and the Ferrari pilot has a small stake in Riviera Equine SARL and Haras d'Etreham's 'TDN Rising Star' Lassaut (Fr) (Almanzor {Fr}). He beat the re-opposing Tribalist (GB) (Farhh {GB}) over this trip at Chantilly Mar. 9 and in the course-and-distance Prix Machado Apr. 21 and appeals as the ideal type of Jean-Claude Rouget improver which tends to enter the mix in this Classic. Rouget also has Al Shaqab Racing's Apr. 17 G3 Prix de Fontainebleau winner Welwal (GB) (Shalaa {Ire}), who beat several of these in that course-and-distance trial which has been boosted by the subsequent G3 Prix de Guiche success of the stable's fifth-placed Vadeni (Fr) (Churchill {Ire}).

André Fabre has trained a modern-day record eight winners of the Poulains and while his sixth in the Fontainebleau represented a dip in form, Ancient Rome (War Front) was one of the country's leading juveniles for Coolmore and Westerberg. Having beaten Scherzo (Fr) (Wootton Bassett {GB}) in the G3 Prix des Chenes here in September, the relative of Pour Moi (Ire) was third over an inadequate seven in the G1 Prix Jean-Luc Lagardere here and second in the G1 Criterium International when the testing ground at Saint-Cloud had turned on him. The same ownership have a second string to their bow in Ballydoyle's The Acropolis (Ire) (Churchill {Ire}), who upped his game on his 3-year-old bow with a second in the seven-furlong Listed Ballylinch Stud 2000 Guineas Trial at Leopardstown Apr. 2. “Maybe he has just come to himself now, so he is worth chancing in this higher grade with the step up to a mile expected to suit,” The Acropolis's jockey Ryan Moore mused.

With 'TDN Rising Star' Cachet (Ire) (Aclaim {Ire}) to aim at in the G1 Emirates Poule d'Essai des Pouliches, the task is to deny the home-trained contingent which has proven difficult of late. Since 2002, only one overseas raider has pulled it off in this Classic which tends to spring up a surprise more often that not. SPs of 38-1, 12-1, 33-1 and 14-1 have been returned in four of the last eight runnings, with only two favourites prevailing in that time. Two of the outsiders hailed from the Rouget stable and he supplies a pair of them here in 'TDN Rising Star' Osmose (Fr) (Zoffany {Ire}) and Zelda (Fr) (Zelzal {Fr}). Sheikh Mohammed bin Khalifa Al Thani's Osmose looked in need of this mile when fourth in the G3 Prix Imprudence at Deauville Apr. 7 and the owner-breeder's racing manager Bertrand Le Métayer is in positive mood. “Osmose is giving very good vibes in her work,” he said. “She is very calm, placid and has a really good mind-set. We can't wait to see her run on good ground and, above all, in a race with pace!”

Zelda, who took the seven-furlong Listed Prix Saraca at Chantilly in October, carries the silks of the famed basketball player Tony Parker's Infinity Nine Horses. She will be ridden by Coralie Pacaut, the recipient of the 'Cravache d'Or' in 2019, who joins Hollie Doyle in a line-up which demonstrates the growing influence of female jockeys. Doyle is on the Harry and Roger Charlton-trained Jumbly (GB) (Gleneagles {Ire}), who carried the Rothschild colours to success in the Listed Radley S. at Newbury in October and who was second in the G3 Fred Darling S. on her return at Newbury Apr. 16. Roger Charlton is looking forward to the step up to a mile for the homebred. “She made good headway at Newbury and I guess she is bred to appreciate an extra furlong, so I hope she settles and I think, although she won on very soft ground at Newbury last season, she is a good-moving filly and on the expected quick ground she should be okay,” he said.

Blink And You'll Miss It

Also in the Lacken is Michael and Julia Iavarone and Michael O'Callaghan's G3 Cornwallis S. winner Twilight Jet (Ire) (Twilight Son {GB}), who was last seen finishing 10th in the GII Breeders' Cup Juvenile Turf Sprint. “He always had a bit of size and a good mind. He's matured a lot over the winter, both mentally and physically, and he's a fine belter of a horse now,” O'Callaghan said. “His mind is very good and I expect it will be a long year for him, with Royal Ascot his first major target.”