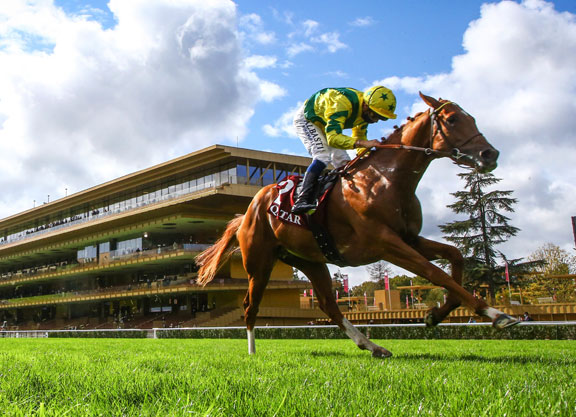 Loving the deep ground at ParisLongchamp, Haras de la Gousserie and Guy Pariente’s Sealiway (Fr) (Galiway {GB}) proved a class apart from his rivals in a depleted renewal of the G1 Qatar Prix Jean-Luc Lagardere on Sunday. Always travelling easily under Mickael Barzalona tracking the even tempo, the 3-1 shot who was second last time in the G3 Prix la Rochette over this course and seven-furlong trip Sept. 6 was in control without being asked a question two out. Opening up on command, the chestnut drew away with relish to score by eight lengths from the 3-5 favourite Nando Parrado (GB) (Kodiac {GB}), with Laws of Indices (Ire) (Power {GB}) 3/4 of a length away in third. “I knew he could win like that–I think last time he was more surprised by the winner than beaten fair and square. It’s taken time to understand the horse, but finally we know that he’s a galloper and not a horse with a turn of foot. Today I told Mickael that I wanted a true-run race and not to be afraid to kick on early if need be. He’s a true little champion and if the owners are happy to travel with this horse he could go to the Breeders’ Cup. We will discuss that first before thinking about next year and I’m convinced he’ll be better then.”

One of the earlier domestic juveniles in action this term, Sealiway saw off the smart Xaario (Fr) (Kendargent {Fr}) by two lengths on debut over six furlongs on soft ground at Saint-Cloud May 12. Racing on going officially quicker than that on all his next four starts, he followed up under a penalty at Chantilly June 19 before finishing third behind King’s Harlequin (Ire) (Camelot {GB}) and Go Athletico (Fr) (Goken {Fr}) in the Listed Prix Roland de Chambure over this course and distance July 14. Taking Vichy by storm when scoring by five lengths in the Aug. 6 Listed Prix des Jouvenceaux et des Jouvencelles at this distance, he again came off second-best to Go Athletico in the Rochette which serves as the stepping stone to this test for the home-trained juveniles.

Despite the absence of the customary Ballydoyle representation including the intended starter St Mark’s Basilica (Fr) (Siyouni {Fr}), the manner with which Sealiway ran away with this prize was impressive even allowing for the part obviously played by ground conditions. The G2 Coventry S. winner and G1 Prix Morny runner-up Nando Parrado and G2 Railway S. scorer Laws of Indices are significant benchmarks who have proven effective on a surface at least on the easy side of good, but were left behind as the winner cut loose in the straight. He rates as the most exciting colt handled so far by Frederic Rossi, who enjoyed Classic glory in June with the G1 Poule d’Essai des Pouliches heroine Dream and Do (Ire) (Siyouni {Fr}). With this performance, he has already usurped his smart 3-year-old stablemate Kenway (Fr) as the best progeny by the Haras de Colleville resident Galiway who is in his second season at stud.

Sealiway is a son of the Listed Prix Herod winner Kensea (Fr) (Kendaragent {Fr}), who hails from the family of the listed-placed Exit To Nowhere pair of Enjoleur (Fr) and Epicurien (Fr), the G2 Prix Malleret scorer Another Dancer (Groom Dancer) and the G3 Park Express S. winner Pollen (Ire) (Orpen). The MAB Agency stepped in for her yearling full-brother to the winner named Seagali (Fr), paying €115,000 for him at the recent Arqana Deauville September Yearling Sale.