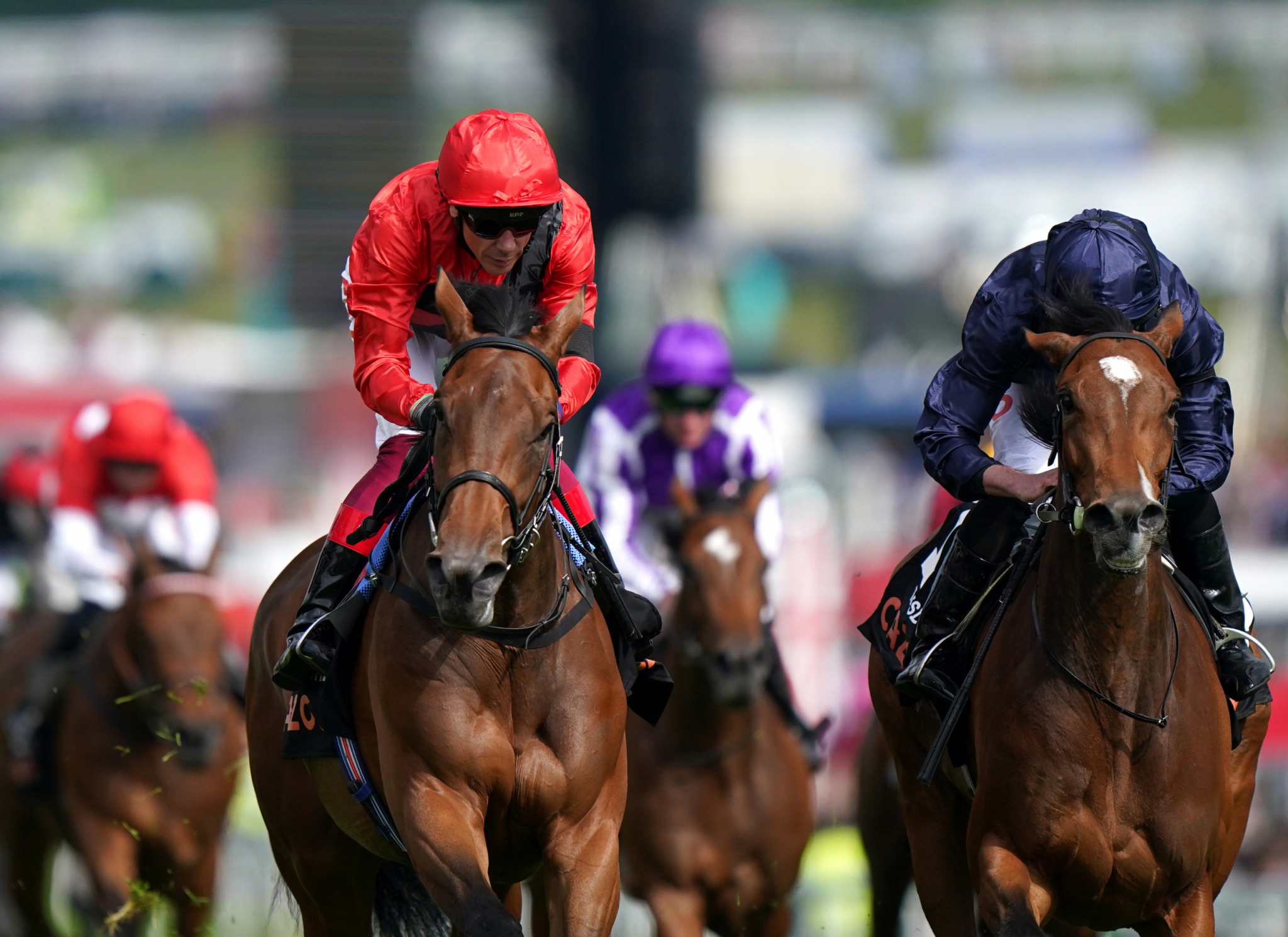 Tuesday gets the bob over Emily Upjohn (left) | PA Media

Choosing her own third birthday to bring Aidan O'Brien a record 41st British Classic, Tuesday (Ire) (Galileo {Ire}–Lillie Langtry {Ire}, by Danehill Dancer {Ire}) inched out TDN Rising Star Emily Upjohn (GB) (Sea the Stars {Ire}) in a thriller for Friday's G1 Cazoo Oaks at Epsom. Third in the 1000 Guineas and runner-up in the Irish equivalent, the homebred who was a 13-2 shot to emulate her full-sister Minding (Ire) arrived from rear to grab the lead inside the final two furlongs and had her nose in front on the line as the slow-starting 6-4 favourite almost pulled off an epic recovery. The official margin was a short head, with Nashwa (GB) (Frankel {GB}) 3 1/4 lengths away in third.

“She was still a little bit babyish and I was further back than I should have been, but she put herself into the race,” Ryan Moore said. “She was just a bit idle and changed her leads late on, so I just had to get her balanced. She has an awful lot of class and it's amazing how the family keep producing. Aidan has peaked her again only 12 days after the Irish Guineas and only he can do that. He did the same with Minding, who got beaten in the Irish Guineas then came here and won. She and Minding are similar size and very similar attitudes. Both have a lot of class, but this filly might be the stronger stayer.”

Runner-up to Discoveries (Ire) (Mastercraftsman {Ire}) over seven furlongs on debut at The Curragh in June, Tuesday had her next assignment in a mile maiden at Naas after a nine-month hiatus and while there were no fireworks she was able to get off the mark and work her way into the picture for the May 1 Newmarket Classic. Only 4-1 for that, she stayed on gamely to fill the frame behind the vastly-more experienced Cachet (Ire) (Aclaim {Ire}) and Prosperous Voyage (Ire) (Zoffany {Ire}) before chasing home the brilliant Homeless Songs (Ire) (Frankel {GB}) at The Curragh three weeks later.

This renewal was a case of “best-laid plans” from the outset as Emily Upjohn broke awkwardly and lost ground with Frankie looking down to check that her shoes were still intact. Soon able to coast to the rail of the field where she raced alongside the eventual winner, she was forced wide off the home turn as Tuesday darted up the inside. As the field veered towards the stands, Tuesday was cut adrift in the centre of the track with a clear passage while Frankie was steering Emily Upjohn near the rail and while it looked initially as though the Gosdens' number one had won the bobber it was Ballydoyle who the fortunes favoured for a 10th Oaks success.

As he always does, O'Brien was quick to share the plaudits for the training achievement which rests in his name. “It feels unbelievable for us to be part of the whole thing, we're a small part of the team and we feel very privileged to be that part,” he said. “I'm so delighted for everybody because everybody puts in so much work, day in and day out, it's literally day and night, so it's unbelievable when everyone gets the return that they get. We're so grateful to everyone, that's what makes the difference and that's what makes it happen.”

Dettori was understandably disappointed with the way the race panned out for the favourite and said, “She fell over, she slipped, lost her footing and fell over. I found myself last and going past all the field, I wish I had the pleasure to have the rail but I didn't, Ryan had that pleasure and I had to make a challenge on the outside. She made up a lot of ground and she was an unlucky loser. It's one of those things. She should have won, it's as simple as that. You've seen her–she's a good one.”

John Gosden said of the runner-up, “They went an even pace, but she has just lost it at the start–it is as simple as that. She has got a lot of ability to come from last and get there. It was a hell of a run. That is bad luck–you can't get left that far and circle the whole field. It is not her style of racing. I think if she had a clean break and not slipped and lost her legs it might have been a different result, but that's racing. She was in front before the line and just after the line but not on it.”

“Nashwa has run great. I think she just ran out of stamina the last 50 yards up the hill,” he added. “She would be better dropping back in trip, but she has run a superb race.” Hollie Doyle was achieving the best finishing position for a female rider in a Classic and commented, “I'm disappointed she didn't win, but I'm not disappointed with her performance at all. She ran a solid race and when she's stepped back to 10 furlongs there will hopefully be big days ahead. I appreciate that it's the best placing ever by a female rider in a Classic, but it doesn't make a lot of difference to me. If I could ever win one though it would be amazing.”

Tuesday becomes the 94th group 1 winner for her sire and the second Oaks heroine and third Classic winner for Lillie Langtry following the exploits of Minding (Ire) in this race and the 1000 Guineas and of another full-sister in Empress Josephine (Ire) in last year's G1 Irish 1000 Guineas. Lillie Langtry, whose top-level wins came in the Coronation S. and Matron S., has also produced the G3 1000 Guineas Trial winner Kissed By Angels (Ire) by Galileo. From the family of the sires Great Commotion and Lead On Time, her pedigree received another significant recent update when the G2 Prix du Conseil de Paris-winning Traffic Jam (Ire) (Duke of Marmalade {Ire}) was responsible for the G3 Prix Cleopatre winner and G1 Prix Saint-Alary runner-up Place du Carrousel (Ire) (Lope de Vega {Ire}). Lillie Langtry's unraced 2-year-old is named Delightful (Ire).