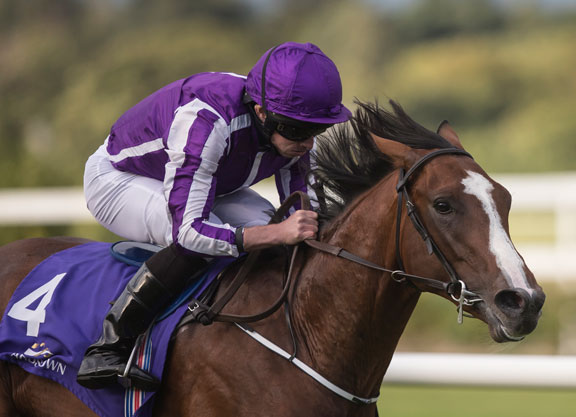 Although the Tyros in its former guise at The Curragh did boast Go and Go (Ire) and King of Kings (Ire) among its winners, it was not until 2006 that the race began a rapid transition into one of Ireland’s most crucial staging posts. In that year, which was its last at listed level, Teofilo (Ire) signalled his take-off to championship heights and the following season New Approach (Ire) became Galileo’s latest celebrated son to resonate ahead of his later glories. This is a contest that has continued to showcase Coolmore’s world superpower, with five of the next nine winners also by the pre-eminent sire of his generation and all going on to succeed at the top level with the likes of Rip Van Winkle (Ire), Cape Blanco (Ire), Gleneagles (Ire) and Churchill (Ire) reaping several prizes in that sphere.

Where The Pentagon will eventually sit among such esteemed company is the stuff of forecast, but this performance at least underlined that he is a quality colt towards the elite of those seen out so far in 2017. His outstanding pedigree suggests that what he has already achieved is a perk, as everything in that regard points to the future but the best ones always show a glimpse of what is to come through their crude ability at two. Much as his stable’s commandant Highland Reel (Ire) had as a juvenile, The Pentagon blew his cover wide open with his maiden success which represented a bound forward from his distant debut sixth behind TDN Rising Star Verbal Dexterity (Ire) (Vocalised) over this trip at The Curragh June 10. Few buttons were pressed in the interim, so his 8 1/2-length defeat of the useful-looking yardstick Medal of Honour (GB) (Lope de Vega {Ire}) under Ana O’Brien back at the same course and distance was an exhibition of embryonic class and prompted his promotion to Ballydoyle nominee for this in the space of just 12 days.

Provided with an ample pace regulator in Berkeley Square (Ire) (Galileo {Ire}) throughout the early stages, the bay son of the 2005 G1 Prix Saint-Alary heroine Vadawina sat third tracking a bona fide target in Theobald who carried no less pressure as the Bolger representative. Soon after turning for home, the favourite took time to gather together as Berkeley Square began to pose a threat from within and it took four reminders from Ryan Moore’s whip for The Pentagon to close the deal. From 200 yards out came his most impressive section of the race and past the line he galloped out strongly as all the qualities of his Aga Khan bloodlines manifested themselves.

While the display had more Derby to it than Guineas and as the stable already have a warm order for Newmarket in fellow TDN Rising Star Gustav Klimt (Ire) (Galileo {Ire}), the prospect of The Pentagon lining up for the May Classic is far from strong but this form still places him among the best of the precocious juveniles seen so far. When one of this distinguished “V” family possesses pace, the results can be surprising with the six-furlong 2-year-old winner Valixir (Ire) able to overwhelm the cream of the milers in the G1 Queen Anne S. after reaching a high level at a mile and a half when successful in the G2 Prix Niel and finishing third in the G1 Prix du Jockey Club in its former guise. His dam Vadlamixa (Fr) (Linamix {Fr}), who was successful over a mile in the Listed Prix de Lieurey, is a half-sister to another versatile heavyweight in Val Royal (Fr) who went from 10-furlong G2 Prix Guillaume d’Ornano winner in Europe to Breeders’ Cup Mile hero in the States. More recently, the Aga Khan’s Veda (Fr) (Dansili {GB}) who shares Vadaza as a second dam with The Pentagon possessed enough pace to be second in the G1 Poule d’Essai des Pouliches (French 1000 Guineas) and his half-sister by the similarly stout influence Dalakhani, Vedouma, was third in the 2015 G3 Prix de la Grotte at a mile.

It is easy to state the winner’s case for the 2018 Derby and Aidan O’Brien, who was extending his tally to 11 here, is already thinking that way. “He was a little bit green and raw and Ryan said he galloped out very well after he really organised himself and lengthened,” he said. “Ana [O’Brien] thought that maybe we should take our time on him a bit the next day and teach him and he was a little bit green first time around a turn here so it was the right thing to do. I’d say he’ll stay well. He travelled well and is a very good mover who I would imagine will have no problem getting a mile this year and start at a mile and a quarter next year. If he’s good enough, the Derby trip is something we will look at but he’s not short of pace either. The [G2] Futurity [S. at The Curragh Aug. 20] could be next.”