Galileo’s Shale Gets Her Revenge In the Moyglare 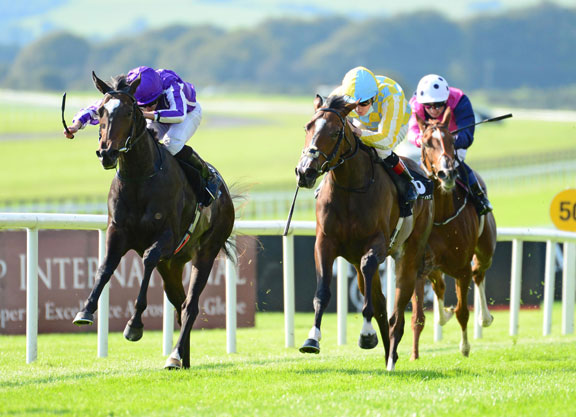 Much has been made of the ability of the average Galileo (Ire) to endure more than a fair amount of engagement in battle, but there continues to be example after example as the weeks of the flat season roll on. There seems especially to be something in The Curragh’s hallowed turf to bring out those mystical qualities from within his charges and on Sunday it was Shale (Ire) who was drawing on it to garner the G1 Moyglare Stud S. Having beaten Pretty Gorgeous (Fr) (Lawman {Fr}) in the G3 Silver Flash S. at Leopardstown Aug. 6 only to lose out to her in the Aug. 22 course-and-distance G2 Debutante S., Donnacha O’Brien’s juvenile starlet was back in the ring to win on points as it came down to a slog. Tracking the Debutante third Mother Earth (Ire) (Zoffany {Ire}) throughout the early stages, the 9-2 second favourite was the first to come under a ride as Ryan Moore started to niggle before the halfway point. TDN Rising Star Pretty Gorgeous was tracking her every move and after Shale had earned the lead passing the two-furlong pole she was set upon by her arch-rival. John Oxley’s Joseph O’Brien trainee was in front briefly 200 yards from the line, but by the time they reached it Shale had the call over the 11-10 market-leader by 3/4 of a length, with Oodnadatta (Ire) (Australia {GB}) 1 3/4 lengths back in third. “She’s an incredibly tough filly and she’s done it very well,” commented Donnacha, who ironically had ridden Intricately (Ire) (Fastnet Rock {Aus}) for Joseph when winning this in 2016. “I know how much Joseph thinks of his filly, so I was surprised to beat her at Leopardstown. She was the first off the bridle and I didn’t think she was going to do anything at halfway, but she found a lot for pressure, toughed it out and was going away at the line. These Galileo fillies can keep improving and she has with every start.”

There was little sign when Shale was sixth on debut behind Oodnadatta in a seven-furlong Leopardstown maiden June 21 that she would hit these heights, but that has turned out to be a smart contest from which the subsequent G3 Marble Hill S. winner Minaun (Ire) (Zoffany {Ire}) sprang, among others. Off the mark over a mile on testing ground next time at Gowran Park July 8, the daughter of the emphatic G1 1000 Guineas heroine Homecoming Queen (Ire) (Holy Roman Emperor {Ire}) may have been in part benefitting from a front-runner’s bias back at Leopardstown as she held Pretty Gorgeous at bay in the Silver Flash reverting to this trip. When she was put in her place so readily in the Debutante last time, that looked to be the deciding blow in the contest but Shale’s doughtiness ultimately told in this championship bout.

“The ground was a little bit more in our favour today,” Donnacha added. “She’s a very low mover, so you would think she wants quick ground but her mother was the same and when they are very clear-winded and tough they tend to go on most conditions. I definitely thought she’d be closer today, but I wasn’t going to say that I thought she’d go and win as we don’t look under the bonnet at home. She has a few options–it could be the [G1 Prix] Marcel Boussac or Newmarket [for the G1 Fillies’ Mile] and after that she could go to America for the Breeders’ Cup. She’ll be even better when she goes back up in trip.” Pretty Gorgeous’s rider Declan McDonogh said, “It was a bit messy early, but I headed the winner and she then got a bit tired. I’ve no excuses–she ran a blinder.”