Galileo's Magic Attitude on top in the Vanteaux 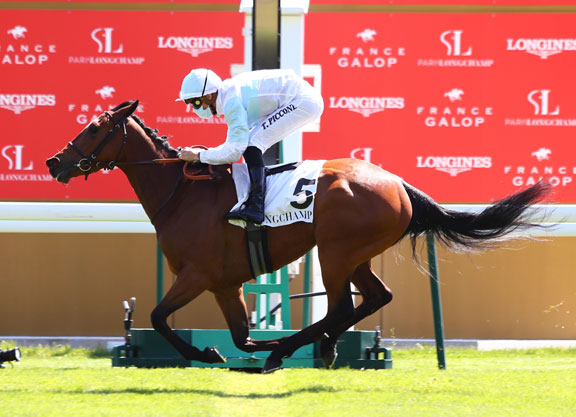 Already boasting serious residual value before Thursday's G3 Prix Vanteaux at ParisLongchamp, Magic Attitude (GB) (Galileo {Ire}) surpassed expectations to win impressively and reward the foresight and investment of her owners. Few Galileo fillies are on the market these days, so when this daughter of the 2011 G1 Nunthorpe S. heroine Margot Did (Ire) (Exceed and Excel {Aus}) failed to meet her reserve at the 2018 Arqana Deauville August Yearling Sale it was left to Haras du Saubouas, Haras d'Etreham, Marie-Therese Dubuc-Grassa and Mohamed Fahad A H Al-Attiyah to form a collective. Stepping up on her latest form when third on her final juvenile start in the Listed Criterium de Lyon over a mile at Lyon-Parilly in September, the 19-1 shot was held up in sixth early by Tony Piccone, swept to the front with a furlong remaining and on to a ready two-length verdict. Emoji (Ger) (Soldier Hollow {GB}), sent off the 7-10 favourite, had Flighty Lady (Ire) (Sir Percy {GB}) a short head back as she clung on to second, but the winner was in a class of her own on this occasion.

Trainer Fabrice Chappet was not entirely surprised. “She worked very well ten days ago and did show a bit last year,” he said. “She was unlucky in her listed race, had definitely improved over the winter and won very easily today. We did expect some improvement, with her being a Galileo and I am very lucky to  have received her. She is in the [G1] Poules d'Essai des Pouliches [at ParisLongchamp June 1] and all options are open, so it is for the owners to decide but the way she won today the [G1 Prix] Saint-Alary [at ParisLongchamp June 14] is the logical option.”

A slow-burner at two, Magic Attitude had run sixth on debut at Deauville in August before scoring at Lyon-Parilly in September. She had run into traffic on the rail when sent back there for the Listed Criterium de Lyon, but this still represented a move upwards for the bay. Her dam, a bargain 10,000gns purchase by Richard Frisby Bloodstock at the 2010 Tattersalls Guineas Breeze-Up, was a precocious and classy juvenile, finishing runner-up in the G2 Lowther S., G3 Albany S. and G3 Princess Margaret S. before landing the Nunthorpe as a 3-year-old. Her first foal was Mission Impassible (Ire), another daughter of Galileo who took the G2 Prix de Sandringham and was placed in the GI Queen Elizabeth II Challenge Cup and G1 Prix Marcel Boussac. Also connected to the G1 Prix de la Foret-winning leading Spanish sire Caradak (Ire) (Desert Style {Ire}), her 2-year-old colt is by Frankel (GB).