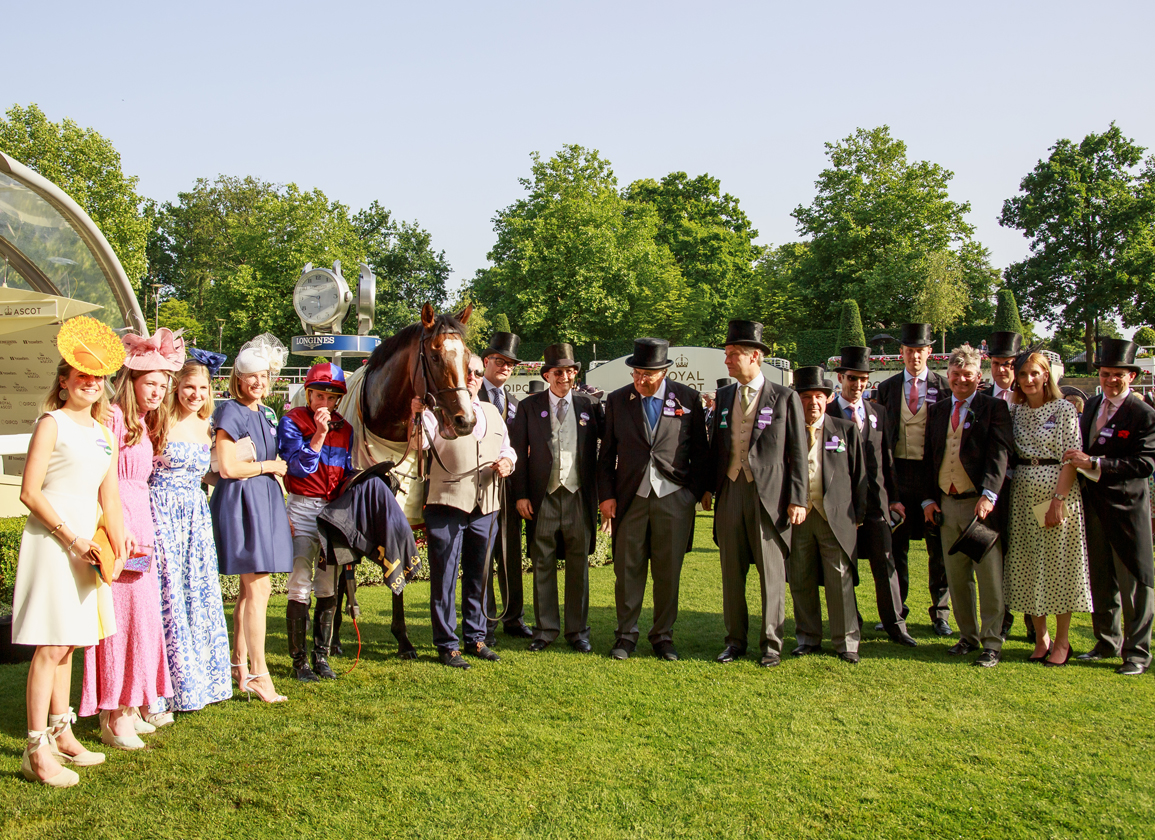 All the rage for Friday's G2 King Edward VII S., Changingoftheguard (Ire) (Galileo {Ire}) issued a display of resolute galloping in the Westerberg silks to make it a landmark 80th Royal Ascot winner for Aidan O'Brien. Fifth in the Derby only 13 days ago, the G3 Chester Vase winner was taken to the lead by Ryan Moore soon after the start and was asked several questions on the long journey to the home straight, but kept responding to pressure to see off all bar the Derby 11th Grand Alliance (Ire) (Churchill {Ire}). Whereas the run to the line was straight and true for the heavily-backed 11-10 favourite, the Charlie Fellowes trainee was off on a tangent and drifting left with Danny Tudhope in the closing stages. That meant that when the moment of truth came, the short-head verdict went the way of the Ballydoyle runner, with a four-length margin back to Lysander (GB) (New Approach {Ire}) in third.

Following on from the successes of Kyprios (Ire) and Magical Lagoon (Ire) on Thursday, Changingoftheguard was supplying his remarkable late sire with a Royal Ascot treble in 2022 and puts him one behind his great rival Dubawi (Ire). John Magnier was on hand to witness the latest Galileo to lay down a particular milestone. “The secret's out,” he quipped in his inimitable manner. “It's well-known and well-discussed that Galileos have their will to win and it's coming through with his sons and daughters. It is all over the place really.” When asked about the now 899 group winners for Aidan O'Brien, he reflected, “That does the talking–he doesn't have to do it. It's refreshing to see a modest approach, I think. You see it with Chris Waller too. Their records show it.”

Aidan O'Brien said of the winner, “Changingoftheguard is a tough hardy horse–very genuine and he'll stay further. We think the horse might be very happy going the St Leger trip. He doesn't surrender.” Moore added, “He was not at his best today–he was having a look and wasn't focused. The runner-up has run across the track, but I needed a bit of help really. He is a very honest horse, but he just gallops. He could have done with a bit of company and he wasn't getting a lot of it, so we were sitting ducks but he does have that bit of class.”

Fellowes said of the runner-up, “To have a really good one for the Roys is fantastic. They have been supporters of mine for quite a long time now and the lads have done such a great job with the horse. He is not straightforward. He has his own ideas about the game, but he's very talented and is a pleasure to have around the place. He'll have his day–it's not today, but he will. The St Leger has been mentioned. Whether he'll stay that far, I don't know.”

Changingoftheguard's dam Lady Lara (Ire) (Excellent Art {GB}) registered five wins in stakes company, with the pinnacle being the GII Honey Fox S. and GIII My Charmer H. The fourth dam Dancing Rocks (GB) (Green Dancer) captured the G2 Nassau S. before producing three black-type winners headed by the Listed Cheshire Oaks winner and G1 Yorkshire Oaks-placed Rockerlong (GB) (Deploy {GB}), while she is also the ancestress of seven group one winners including the 2000 Guineas-winning sire Footstepsinthesand (GB), as well as the European champion Superstar Leo (Ire) (College Chapel {GB}) whose wins featured the G3 Norfolk S. at this meeting. Lady Lara's unraced 2-year-old Galileo's Compass (Ire) is, as his name suggests, a full-brother to Changingoftheguard who was bought by BBA Ireland for Yulong Investments for €250,000 at the Goffs Orby, while she also has a filly foal by Wootton Bassett (GB).