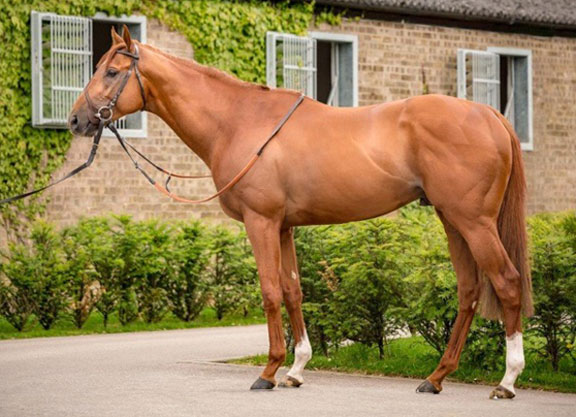 The O'Callaghan family and Al Shaqab Racing have announced the addition of Classic winner Galileo Gold (GB) (Paco Boy {Ire}–Galicuix {GB}, by Galileo {Ire}) to the stallion roster at Tally-Ho Stud in Westmeath. Trained by Hugo Palmer for Al Shaqab, the 4-year-old, who retired from racing this year, won the G2 Qatar Vintage S. as a 2-year-old and wound up his juvenile campaign with a solid third in the G1 Prix Jean-Luc Lagardere at Longchamp. Produced in fine shape by his trainer on his 3-year-old seasonal debut in the G1 QIPCO 2000 Guineas at Newmarket, Galileo Gold made all the running under Frankie Dettori to record an emphatic success over Massaat (Ire) (Teofilo {Ire}). He finished second to Awtaad (Ire) (Cape Cross {Ire}) in the G1 Tattersalls Irish 2000 Guineas, but gained revenge on that rival when beating The Gurkha (Ire) (Galileo {Ire}) and Awtaad in the G1 St James's Palace S. at Royal Ascot. He then lost out to The Gurkha by just a neck in a thrilling renewal of the G1 Qatar Sussex S. at Goodwood last year.

Galileo Gold amassed just shy of £1m in earnings and commenting on the next phase of his career Khalifa Al Attiya, Al Shaqab's general manager said, “Galileo Gold is a very special horse to us at Al Shaqab since he became our first Classic winner in last year's 2000 Guineas. He is an outstanding individual and we are very pleased to extend our partnership with Tally-Ho to stand Galileo Gold in Ireland alongside Mehmas.”

Tally-Ho Stud is in pole position to have stood the leading first-season sire in GB/Ire for the second successive year.

The stud's Roger O'Callaghan said, “We are delighted to stand a miler of the quality of Galileo Gold. He was a tough Group 1 performer at two who had the speed to win over 6f. He then trained on into one of the season's top milers at three whose winning performances in the 2000 Guineas and St. James's Palace S. showcased his high cruising speed and turn of foot. Not only that, he is related to one of the most influential sires of the modern era in Montjeu. We look forward to strongly supporting him at stud.”

A fee for Galileo Gold will be set at a later date.