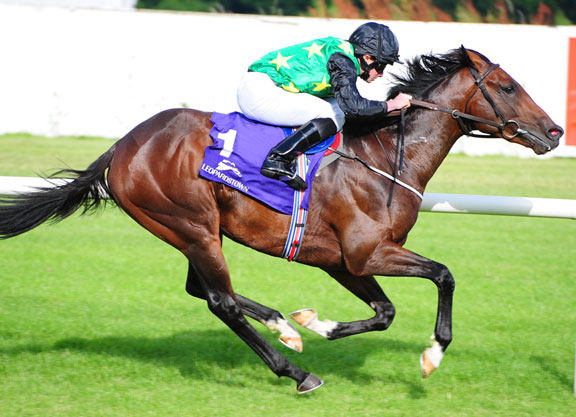 DOUGLAS MACARTHUR (IRE) (c, 2, Galileo {Ire}–Alluring Park {Ire} {MSP-Ire}, by Green Desert), a full-brother to the 2012 G1 Epsom Oaks heroine Was (Ire), G1SW-Eng, G1SP-Ire,$496,294, who sold for 1.25million guineas at Tattersalls in October, was a disappointing last of six when the 2-5 favourite for his Leopardstown debut over a seven-furlong trip June here June 9 and was a different proposition here leading from the outset. Stretching his rivals in early straight, the 9-10 market-leader was not fully extended to win by five lengths from the China Horse Club International, Qatar Racing and Triermore Stud’s 1.2million gns son of the disqualified G1 1000 Guineas winner Jacqueline Quest (Ire) (Rock of Gibraltar {Ire}) named World War (Ire) (Galileo {Ire}).In doing so, he was emulating Camelot (GB) (Montjeu {Ire}) who won this in 2011 and was one of six to win it for the stable in the last eight runnings. The winner’s stablemate Utah (Ire) (Galileo {Ire}), a 260,000gns full-brother to the G1 Epsom Derby runner-up At First Sight (Ire), was sixth after meeting a spot of trouble late on. “We’re very happy with that. The reason we let him roll on was because he was so green last time and needed to learn,” trainer Aidan O’Brien said. “Even today at the road, he landed in the middle of it and he’s still a baby. In an ideal world, he’d have a run or two more before next year. His mind is still sleeping, but we knew he had a massive engine. He would have learned a lot today. We were taken a little aback by how green he was. We’ll look at the [G2] Beresford [S. at The Curragh Sept. 25] or the [G3] Golden Fleece [Champions Juvenile Turf at Leopardstown Sept. 10] for him. I’d like to give him a little bit of time. He’s still very babyish.” Also a full-brother to the 5million gns purchase Al Naamah (Ire), MGSP-Fr, Douglas Macarthur’s dam is a half to the juvenile and 3-year-old champion and G1 Epsom Derby hero New Approach (Ire) who needs no introduction as a significant sire, and also to Dazzling Park (Ire) (Warning {GB}). She was a G3 Matron S.-winning highweight who was also second in the G1 Irish Champion S. and third in the G1 Irish 1000 Guineas and is the second dam of the G1 Phoenix S.-winning sire Alfred Nobel (Ire). A daughter of the dual champion Park Express (Ire) (Ahonoora {GB}), Alluring Park who is also a full-sister to the sire Shinko Forest (Ire) has a yearling filly by Galileo (Ire) to come. Lifetime Record: 2-1-0-0, €10,148.
Video, sponsored by Fasig-Tipton.
O-to Markus Jooste, Susan Magnier, Michael Tabor and Derrick Smith; B-Lodge Park Stud (IRE); T-Aidan O’Brien.