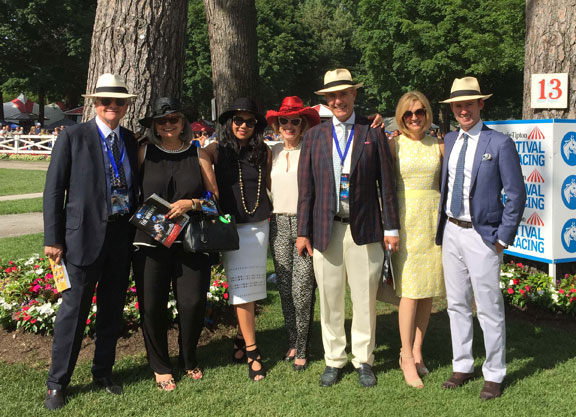 Gai and her team at the races at Saratoga

In August of this year, my husband Rob and I attended one of the most charming, thrilling and well-organized racing carnivals in the world. Spending five days in Saratoga would have to go down as one of the greatest experiences we have ever had at the races. Su-Ann Khaw, and Anna Seitz from Fasig-Tipton, had been keen to get us to Saratoga for quite some time, and it doesn't take too much persuading for the Waterhouses to take a trip to a racing destination. I found the layout of the tracks very similar to Doomben and Eagle Farm, which are adjacent to each other in Queensland, but on the other hand, it was remarkably different to anywhere else in world.

Each morning that we attended track work at the Oklahoma training track, little tour buses would travel from barn to barn packed with people listening and watching intently as the strappers (the Australian term for grooms), jockeys and trainers go about their day-to- day routine. They watched in awe as horses were washed down, ponies were shod, horses were saddled up and the riders received their orders. All of this is part and parcel of the everyday routine at the delightful and charming Oklahoma training track, and the Saratoga Racing Carnival.

One of the most wonderful aspects of traveling internationally is the people you meet. Making new acquaintances, catching up with old friends, and even meeting up with people I have had the pleasure to work alongside in the past. Bob Duncan and Kenny McPeek were in attendance at the barriers and I really enjoyed spending time with these learned horsemen who had come out to work with my horses four or five years ago. Their expertise and knowledge have been invaluable to the men and women I work with when handling horses at barriers.

Approximately 23,000 industry participants and racing fans pass through the gates of Saratoga racecourse from 7 a.m. People come from near and far, walking, driving, and carrying their eskies and fold out chairs. It was almost like stepping back in time. The men were wearing coats and ties, and the women dressed with a sense of town and country elegance. The dress in the Members' Enclosure was extremely classic; it was refreshing to be among them. And the big players were all there.

When visiting the top trainers' yards, Todd Pletcher's stable blew us away with his attention to detail, and the pristine appearance of his barn. Chad Brown, also a trainer, is a young man with a stellar career in front of him. He was intense and focused, yet utterly charismatic when speaking with us. Shug McGaughey and I spent quite some time discussing the differences in training between Australia and the U.S., and I must say he gave me a terrific insight into the American racing industry. Christophe Clement, his vivacious wife Valerie, his bright, young son and also his Assistant Trainer Miguel and his stylish daughter Charlotte, were all so charming. Christophe was so gracious in giving us his time and discussing the different training methods in France and the U.S. As a young man he made the decision to break away from his family in France and start in a country where he had no ties at all. A challenge not for the faint-hearted, and what a success he has become.

This piece would not be complete without mentioning my great friend Wesley Ward. Wesley has been a wonderful mentor to my girls and boys who have traveled over to the U.S. to learn his way with horses. His dominance in the 2-year-old ranks and ability to have his horses primed for an international campaign is nothing less than astonishing.

As well as their great trainers, Richard Mandella and Bob Baffert, we met two great horses: Beholder and American Pharoah. Richard Mandella runs a boutique operation and since we have departed Saratoga his magnificent mare, Beholder, absolutely donkey licked them to become the first mare to win the GI Pacific Classic. While we were in Del Mar, Bob Baffert kindly showed us the great Triple Crown-winning colt, American Pharoah. His terrific temperament was amazing as he stood so quietly next to his owners, the Zayat family, and his trainer Bob.

What was really refreshing was the friendliness and generosity of all of the trainers at Saratoga. Every trainer was slightly different in their approach, but they had one thing in common: the horses train and live on the track while the meet is on. I also noted the difference in training conditions and the style of horses. In the U.S. horses go from the barn to the track to work on the dirt, whereas I like to vary the type and conditions of exercises my horses complete. They can gallop on the dirt or the grass; I send them to the beach to wade through the water or go for a swim; I use treadmills; my horses are ponied or used as ponies; they complete figure of eights and use the equine pool or spa; and they can arrive at the track or walk home over a good-sized hill. The horses were quite different to what I see in Australia. They had massive shoulders and good, deep girths but they tapered up behind, making them look strong yet elegant. Australian horses are more bookended with big, strong shoulders, powerful hindquarters and a lot more bone.

Another major difference between Australian racing and racing in the U.S. is the use of race-day medication. The Lasix issue is a hot potato at this point but the use of drugs in racing generally is cause for international concern. I was asked to be involved with WHOA (Water Hay Oats Alliance) by Staci Hancock and I immediately jumped at the chance because I fully support them in their endeavor to prohibit the use of performance enhancing drugs in horse racing. As a trainer of racehorses, I must stress how detrimental this practice is to the industry as a whole. It stops horses from backing up because it takes longer to recover when racing on Lasix, and this causes owners, trainers, jockeys, and everyone in between to lose dollars. Week after week horses back up in Australia. You only have to look at the major carnivals such as Melbourne in the Spring, where horses may race in the G1 Mackinnon S. over 1 mile, 2 furlongs on the Saturday before contesting the G1 Melbourne Cup over 2 miles on the Tuesday, three days later. The statistics show that in Australia horses will race, on average, 12.6 times and in the U.S. they will only race 7.4 times. Twenty years ago, U.S. horses would back up regularly. Not only is this detrimental to the animals that we care for and the industry in terms of turnover, but public confidence in racing is at an all-time low. This is a matter that we must all stand together on to make our sport grow and flourish, providing a future for the industry.

Rob and I also had the pleasure of attending Fasig-Tipton's Select Yearling Sale, whose catalogue comprised of approximately 200 yearlings. The prices were high, as I experienced first-hand when trying to secure two lots, and the competition was fierce. Not being a major player at the sale, as I would be in Australia, this allowed me to observe and it really was a learning curve. I enjoyed the time I spent with astute bloodstock agent Marette Farrell, who had worked with me some years ago. We have kept a close association and I found her selection of yearlings and her intimate knowledge of pedigrees exceptional. We were then joined by ex-pat Irishman Niall Brennan. Niall and I have a similar eye when looking at yearlings and he reminded me of the time he and his brother joined me for a day during the E.I. epidemic. He explained some of the techniques they employ with yearlings, for example working them in figure eights. To this day I still do these exercises with my horses to get them using their diagonals and also to get the big colts concentrating. I also had a most refreshing time looking at yearlings with Byron Rogers, who has a clear understanding of American/Australian pedigrees and the type of horse that would work Down Under, or vice versa. All three horsemen had one major thing in common: an intimate understanding of the American bloodstock business.

This article could not be complete without the greatest of thanks to Jon and Sarah Kelly, who so warmly included us into their lives, like we were part of their family, during our time in U.S. Without Jon and Sarah, the trip just wouldn't have been the same and we cannot thank them enough. They also introduced us to their great friend and veterinarian, Dr. Gregory Ferraro, a wonderfully learned man who provided us with an in-depth insight into the American racing industry from the standpoint of a veterinarian. Finally, Fasig-Tipton must be thanked for extending their hospitality and inviting us to their sale. I can honestly say that they, and everyone else involved, have given us the experience of a lifetime.