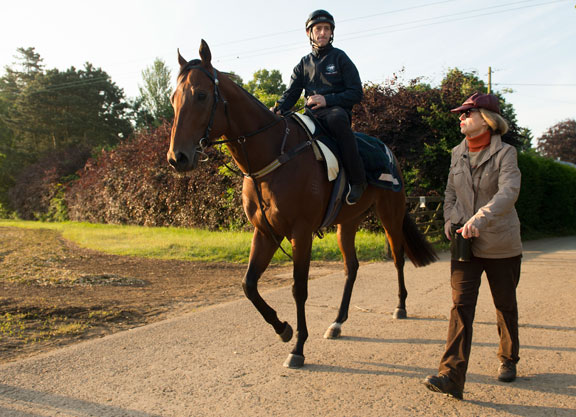 Having Wandjina (Aus) (Snitzel {Aus}) racing in the G1 Diamond Jubilee at Royal Ascot gave me the opportunity to visit Newmarket with a horse in training. My base at Newmarket for the trip was the iconic Warren Place, where the late and great Henry Cecil dominated English racing from for many years. While in Newmarket I had time to make comparisons between the English way of training and the way we do things Down Under.

The differences are numerous. In Australia all the feeds are individually made and quantities of corn and oats are much higher. I too use blends of tic bean, chaff, lucerne, salt and molasses, plus additives. Three times a week the horses get a boiled feed of barley, oats, corn and molasses cooked over a 12-hour period into a runny syrup, which is added to their feed. They love it! This helps build muscle and gives the horse extra stamina. In Newmarket, most of the stables I visited had a pre-mixed feed.

The shape of the English horse's hoof is another fundamental difference. Upon arriving in Australia, my English imports have a much longer toe, and this is quickly changed as to give them more heel and less toe, enabling them to have a quicker pick-up. I had my farrier Kane Simpson travel with Wandjina, and he had opportunity for discussion with leading Newmarket farrier Stephen Davies. This discussion highlighted many differences, but both men came away having learnt something new from the meeting.

In Australia, like in America, horses are taught to jump and run. This is not necessarily an advantage in England. In Australia, with the exception of the 1000 meter, 1100 meter and 1200 meter races at Flemington, all our races are run and won around a bend. I like my horses to be balanced and full of momentum when they corner, then they have to negotiate–on average throughout Australia–a 350 meter straight. At Ascot, the majority of the races are completed up the straight and it looked to my eye that the horses that were full of running at the two furlong pole were invariably being run down.

Perhaps the biggest lesson that I will take home from five days at Royal Ascot is that a champion sprinter is required to win the sprint races. Wandjina was a winner at the top level in Australia at 1400 meters (seven furlongs) and 1600 meters (a mile). The colt's run in the Diamond Jubilee was excellent considering he was at the end of a long preparation and that his Aussie form was over just a touch further. The colt thrived in the open spaces at Newmarket and I know this for a fact, as I really had the opportunity to study him during his work. One can do this at Newmarket when, despite there being some 3000 horses in work, you often find yourself alone with your horse in the wide open spaces. This was a welcome change from the hustle and bustle of a morning at Randwick.

Wandjina, leading into the race, was a sight to behold and I could not have been happier with his preparation. He ran into a hot field and he was far from disgraced behind the Wesley Ward-trained Undrafted.

And how about the wonder that is Wesley Ward. Wesley was the first American trainer to win a race at Royal Ascot and the rollercoaster rolls on. With his truly unique training methods, Wesley is picking up Group 1's throughout England and the rest of Europe. The great trainer, who I am thrilled to call my friend, has now won six races at Royal Ascot, including five victories with 2-year-olds. I know a thing or two about the juveniles and for Wesley to year-after-year continue to be able to travel his young horses from Florida to Royal Ascot and win at this prestigious meeting is a great skill. Rob and I have not only visited Wesley at his Florida base, but we have spent many more hours in Wesley's company. Each time I see Wesley it is a very rewarding experience and I will continue to send many of my young horsemen and women over to Florida to see things from a different perspective under Wesley's guidance.

Royal Ascot is like no other meeting. The pomp and pageantry is unmatched anywhere else in the world. The presence of Her Majesty and the Royal Family and the coming together of the best horses in the world and the racing royalty make this a not-to-be-missed racing experience. I will be back. See you there in 2016.