Gaffalione: Stewards Never Spoke to Me 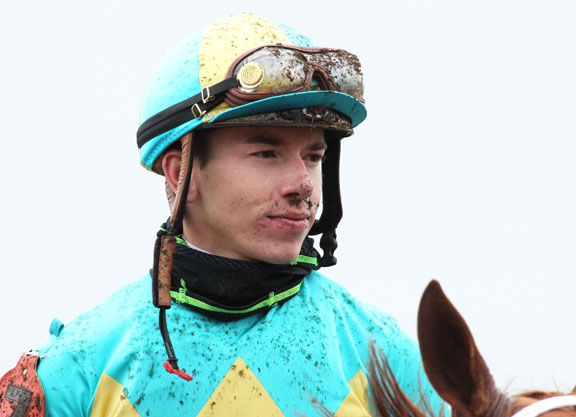 Though he did nothing wrong in Saturday's GI Kentucky Derby, jockey Tyler Gaffalione was a central player in the bumping incident that led to the historic disqualification of Maximum Security (New Year's Day). Yet, Gaffalione said the Churchill Downs stewards never spoke to him after the race.

“They never spoke to me,” he said. “To be honest, I thought there'd be an inquiry. I was surprised that there wasn't.”

Gaffalione rode War of Will (War Front), who was just outside Maximum Security when the latter came out near the top of the stretch and collided with Gaffalione's mount. That set off a chain reaction that led to War of Will bothering Long Range Toddy (Take Charge Indy). Bodexpress (Bodemeister) was also affected and had to be steadied by jockey Corey Landeros.

After a delay of about 20 minutes, Country House (Lookin At Lucky), who crossed the wire second but did not appear to be affected by the bumping incident, was declared the winner.

One obvious reason that the stewards did not make it a priority to talk to Gaffalione is that he did not claim foul. However, he said there have been times during his brief career when he has been interviewed by stewards when he did not lodge an objection or was not in a position to have his horse moved up or down due to a disqualification.

“It depends. Every track has different ways of handling things,” he said. “There have been instances where I might have finished last, but something happened and I was in the mix and they asked me of my opinion of that. With everything going on Saturday, I'm sure the stewards had their hands full.”

When asked why he did not claim foul, Gaffalione said that he discussed doing so with trainer Mark Casse, but they saw no benefit in doing so.

“When I got off the horse I went to see Mark,” he said. “We finished eighth, so we felt it really wasn't necessary. We thought that was the stewards' job in a race like that, especially a race like the Derby. If they felt there was something wrong they should have put up the inquiry sign and there was no inquiry. If we finished fourth or fifth and could have been moved up and gotten more money for the horse, owner and trainer, I definitely would have claimed foul. But we had nothing to gain from it.”

Gaffalione said at the time of the incident, War of Will was traveling easily and he sensed that he had a legitimate shot of winning the race.

“Going into the turn I was sitting behind Luis Saez on Maximum Security,” he said. “I was just kind of following him around there. The horses outside of me looked like they were starting to back up a little bit and they were both longshots. So I wanted to advance my position, move forward a little bit. So, I got outside of Luis. It seemed like his horse kind of switched leads on him and kind of went out. Luis did nothing wrong. Things happen out there. Horses see things and get spooked; there's a lot going on. At that point, we had just started to make our initial run and I had plenty of horse. Luis's horse stopped all my momentum, I definitely had to take a good strong hold of him to make sure we didn't clip heels. He definitely bumped into me a couple of times. It was unfortunate.”

Would he have won if not bothered?

“It's tough to say,” he replied. “I think the horse had every chance to be 1-2-3 if nothing happened. I had a lot of horse around the turn. And he's a strong horse who usually finishes strong. He stopped his momentum. I'm not sure if he would have beaten the winner, but he definitely would have given him a run and I think we definitely would have finished in the top three.”

It was a much improved effort from War of Will after he had finished ninth as the heavy favorite in the GII Louisiana Derby and Gaffalione believes a major victory is right around the corner for his colt.

“I've always been so confident in this horse,” he said. “I know he's special and he's showed it so many times. He's just been a little bit unlucky in his last two starts. Hopefully, moving forward, he can get a clean trip and show everybody what he can do. We all believe in him and everyone else will soon enough.”