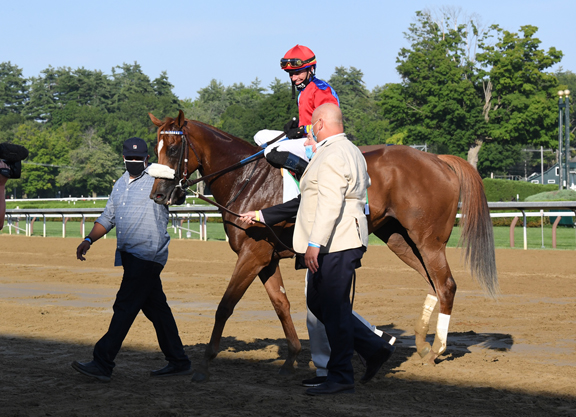 The finger pointing over Tyler Gaffalione's decision not to ride Swiss Skydiver (Daredevil) in the GI Preakness S. continued Thursday when Gaffalione's agent Matt Muzikar said trainer Ken McPeek's version of the events was “nowhere near the truth.”

On this week's edition of the TDN Writers' Room podcast, McPeek sharply criticized both Muzikar and Gaffalione, claiming that the two reneged on an agreement to ride the filly in the Preakness.

“I announced that we're going to run in the Preakness and Tyler was on board,” McPeek said on the podcast. “By maybe 6:00 that night, his agent tells us that he can't ride. And I'm like, 'Look, you've given us a two-race commitment [GI Kentucky Oaks and Preakness].' He said, 'Oh well, sorry, I've got to ride for Chad Brown at Keeneland.' I said, 'You can't do this. It's dishonorable.' I've been doing this for 35 years and I've never had something like that happen. I still find it dishonorable. Shame on Tyler Gaffalione and his agent.”

When Muzikar told McPeek his rider would not be accepting the mount in the Preakness, McPeek was left to scramble before lining up Robby Albarado.

About the only thing that Muzikar and McPeek agree upon is that Gaffalione did agree to a two-race commitment. But Muzikar said that after the Oaks McPeek told him Swiss Skydiver would be making her next start in the GI Juddmonte Spinster S., which was run the day after the Preakness.

“Maybe two days after the Kentucky Oaks he called me and said he didn't know what the second race was going to be, that it was between the Spinster, the Preakness and the [GI] Queen Elizabeth,” Muzikar said. “I told him that I needed to know as soon as possible. We talked again Saturday, nine days before the draw for the Preakness, and he told me she was going in the Spinster.”

Muzikar said that after he was told that Swiss Skydiver was going to run in the Spinster, he started lining up mounts for Gaffalione. He turned down all mounts on the Preakness card and accepted mounts for the weekend races at Keeneland. Gaffalione did not win a race on the Oct. 3 card at Keeneland but had several live horses, including GI First Lady S. favorite Newspaperofrecord (Ire) (Lope de Vega {Ire}) and GI Shadwell Turf Mile S. favorite Analyze It (Point of Entry).

Muzikar said that McPeek did not tell him he was going to run in the Preakness until the Saturday before the race, by which time he had already made commitments to Chad Brown, Brendan Walsh and others to ride for them the same day at Keeneland.

“I called him and said, 'What are you doing?'” Muzikar said. “He said, 'Matt, we are running in he Preakness. Handle it.' Then he hung up the phone.”

Muzikar said that it was too late to get out of his commitments at Keeneland.

“What did he expect us to do? Not take business for the Preakness card or at Keeneland and sit there and wait for Kenny McPeek because the world revolves around him?” Muzikar said. “Knocking me and the jockey, he crossed a line.”

On the podcast, McPeek said that after Gaffalione worked Swiss Skydiver at Churchill Downs the Saturday before the Preakness he told the trainer how eager he was to ride her in the Triple Crown event.

“Tyler worked her and then Tyler and I came into my office and he said, 'Oh my God, that's the best she's felt all year. Let's go. Let's do it.' I announced we were going to run in the Preakness and Tyler was on board,” he said.

Muzikar said that McPeek reached out to Gaffalione.

The agent said he was particularly upset that McPeek chose to criticize Gaffalione.

“Tyler had nothing to do with this whole situation, so I don't like him knocking the jockey,” he said. “Tyler is the greatest kid and the greatest jock I have had in the 26 years I have been doing this. He did nothing to him.”