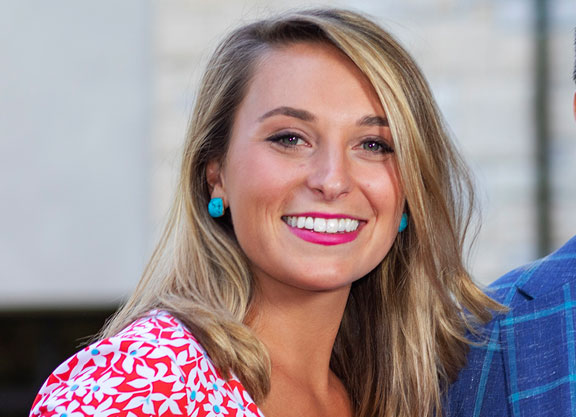 Like everyone else, Gabby Gaudet is looking forward to Keeneland’s special summer meet, which kicks off Wednesday. With 10 graded stakes races packed into a five-day schedule, she knows the meet will be special, but also different. Keeneland has never run in the summer before, and, for this meet, no spectators will be allowed to attend. As one of the hosts of the track’s simulcast feed, Gaudet’s job will be to deliver the “Keeneland experience” to people’s living rooms.

“I know people will miss Keeneland and miss being on track,” said Gaudet, this week’s Green Group Guest of the Week on the TDN Writers’ Room podcast presented by Keeneland. “Hopefully, we’ll be back in the fall. I think what we will be doing will make the transition a little bit easier for the passionate racing fan.”

Because fans aren’t allowed to attend, Keeneland is enhancing its simulcast production as part of the “Keeneland at Home” theme that will be part of the meet. Gaudet, along with Scott Hazelton, will kick things off each racing day at 11:30 with a 30-minute simulcast show previewing the day’s races. It can be viewed on Keeneland.com, the Keeneland Race Day app, Keeneland Select or CWKYT locally in Lexington. During the meet, the Keeneland simulcasting feed will also be available on the TDN website.

Once the races start, Gaudet, a regular on TVG, and Hazelton will be giving blanket coverage of the meet. Gaudet will, of course, handicap the races and give her opinions on the looks of the horses in the paddock. Since the media is not allowed in, she will also conduct numerous post-race interviews in an effort to make as much information as possible available to the writers and the fans.

“We’ll be trying to do more with the interviews after the races,” she said. “We’ll talk to the winners but also to a trainer who has a heavy favorite that loses. We will be trying to provide as much information as possible for the media and for the fans and for the public who cannot be onsite.”

Not everything will be about who wins and loses.

“There will be the entertainment and the fun element,” she said. “Keeneland will be posting some of their famous recipes, like burgoo, online. Burgoo in July doesn’t sound too appetizing, but you can print it out and put it in the cookbook for later.”

Gaudet has become one of the most visible personalities in racing. When asked what others can do to follow in her footsteps, she said the easiest way to get there is to put in a maximum effort.

“Work hard, ask questions, and don’t pretend that you know everything because you won’t get very far,” Gaudet said.

Gaudet made history earlier this year when she worked as an announcer at the Keeneland January sale, becoming the first woman to do so. She said she felt immense pressure, but would like to work more in that role in the future.

“Yes, I would definitely like to do more of it and I believe I might be doing some more at the September sale,” she said. “I haven’t confirmed that with anybody, but I believe that’s in the pipeline. That whole experience was such a whirlwind. And honestly, because of the pandemic, it feels like that happened maybe five years ago. It was a historic moment.”

Elsewhere on the show, in the West Point Thoroughbreds news segment, the writers discussed the latest developments out of Arkansas, where, according to reports, two Bob Baffert-trained horses, Gamine and Charlatan, tested positive for the banned substance lidocaine. Earlier in the week, the split samples from both horses confirmed the positive, but Baffert has vowed to fight the impending penalties. The consensus among the writers was that Baffert was fighting an uphill battle because of the trainer’s responsibility rule.

The writers also dove into the story of Tom VanMeter, the Lexington area consignor who made racist posts on social media. Click here to listen to the podcast and click here to watch it on Vimeo.