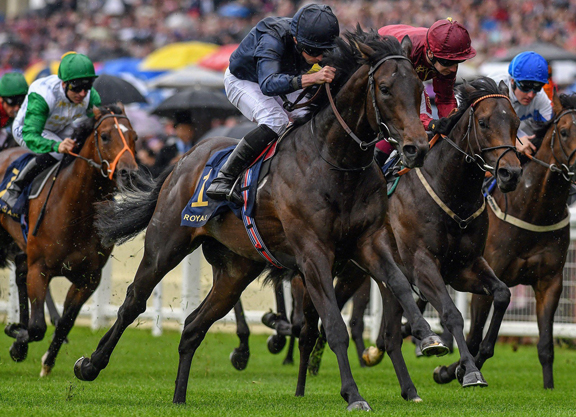 Michael Tabor, Derrick Smith and Mrs. John Magnier's Arizona (Ire) (No Nay Never–Lady Ederle, by English Channel), winner of the G2 Coventry S. in only his third career start, has been retired from racing and will stand under the Coolmore banner at Castlehyde Stud for the 2021 season. A fee for Arizona will be announced at a later date.

“Arizona is a very good-looking and good-moving son of No Nay Never who really fills the eye,” said Castlehyde Manager Paddy Fleming. “He's got a very current, fast pedigree too, so I think he has a lot of appeal.”

In his second start at two, the Stephen Sullivan-bred colt won a six-furlong maiden at the Curragh by eight lengths and was sent straight to Royal Ascot for Coventry, where he quickened well to triumph over a good field which included subsequent group winners Threat (Ire) (Footstepsinthesand {GB}, Golden Horde (Ire) (Lethal Force {Ire}) and Royal Lytham (Fr) (Gleneagles {Ire}).

Runner-up behind subsequent champion juvenile Pinatubo (Ire) (Shamardal) in the G1 Dewhurst S., he earned a Timeform rating of 119, behind only Pinatubo and subsequent G1 2,000 Guineas winner Kameko (Kitten's Joy).

One of seven Group 1 performers from No Nay Never's first two crops, Arizona is a full-brother to MGSW and GISP Nay Lady Nay. The pair are out of a half-sister to the dam of European Champion 2-Year-Old Dabirsim (Fr) (Hat Trick {Jpn}), who sired group winners Different League (Fr) and Coeur de Beaute (Fr) from his first crop.