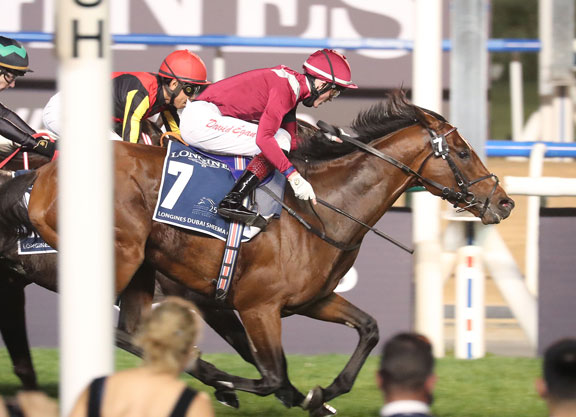 After his victory in the G1 Longines Dubai Sheema Classic on Saturday, Prince Faisal's Mishriff (Ire) (Make Believe {GB}) exited the race well. A potential long-term goal for the bay is the G1 Qatar Prix de l'Arc de Triomphe at ParisLongchamp in October. Successful in the G1 Prix du Jockey Club and G2 Prix Guillaume d'Ornano at three for trainer John Gosden, who now trains with his son Thady, the 4-year-old colt saluted in the $20-million Saudi Cup on dirt in Riyadh on Feb. 20 before switching back to grass for his Meydan appearance. It was his first try at the Arc's 1 1/2-mile trip and he will now receive a freshening.

“I will discuss it with Prince Faisal, but it was always the plan to see if he could be an Arc horse and I think he proved he gets the mile and a half,” Gosden said of Mishriff on Racing TV's Luck On Sunday programme. “They went quick to the bend, then they slowed it up and he finished well, so I think he'll freshen for the summer.

“My feeling would be races like the Eclipse, the Juddmonte International, the Arc and the King George. Those are the races to be looking at and seeing where we are at the time. That's a long way off. He deserves a pretty good holiday.”

One race that is most likely off the table is the GI Breeders' Cup Classic at Del Mar in the fall.

“Having had a lot of success at Del Mar over the years I do know that straight very well and I always feel they should pick up the finishing wire and move it another 100 yards down,” he said. “It's a very short straight and a different style of racing. You've got to have real tactical speed and you ping off the bend. This is a horse who enjoys the length of the straight. I don't think it's going to suit him.”

His Highness Sheikh Zayed bin Mohammed Racing's Lord North (Ire) (Dubawi {Ire}), who won the G1 Dubai Turf earlier on the Dubai World Cup card, as well as the G1 Prince Of Wales's S. last June, will target the latter race after a break as well.

Gosden added of Lord North, “I think he'll go back for the Prince of Wales's S. again [at Royal Ascot]. We'll freshen him up now for the summer.”