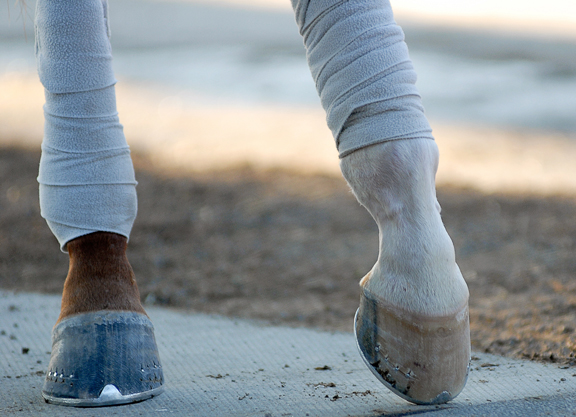 Funding has been nailed down for purchase of a standing Magnetic Resonance Imaging (MRI) unit to be housed at Santa Anita. The unit, from MRI manufacturer Hallmarq, is expected to be in full operation by early in the upcoming Santa Anita season, which begins Dec. 26.

“We are very pleased to have received the support of so many individuals and organizations in the sport,” said Karen Klawitter, Southern California Equine Foundation (SCEF) CEO, in the release.

Funding for the machine arrived from various corners. The Dolly Green Research Foundation (DGRF)-affiliated with the Southern California Equine Foundation (SCEF) and established at the bequest of the late Dolly Green–a longtime racehorse owner with a special interest in equine welfare–had months ago pledged $450,000 towards the unit. The Oak Tree Charitable Foundation recently promised another $50,000.

At the same time, the new MILE-Positron Emission Tomography (PET) scan unit is still undergoing preliminary trials at the University of California Davis’s School of Veterinary Medicine, led by Mathieu Spriet, associate professor of Surgical and Radiological Sciences at UC Davis. According to Klawitter, the PET scan unit is expected to arrive at Santa Anita on Dec. 12th.

It was back in May the TDN revealed plans to bring both PET and MRI technologies to Santa Anita. By October, however, funding was proving to be a problem for an MRI unit that can come with a price tag of around $800,000.

Experts emphasize how the PET and MRI technologies will complement one another in the early diagnosis of injuries in the lower limb, the most common location of catastrophic injury in racehorses, the locus of these injuries typically being the fetlock. Pre-existing injuries which aren’t always clinically apparent are present in more than 85% of catastrophic breakdowns.

All told, there are between 60-65 standing MRIs around the world, and studies have shown how this technology detects certain lower limb issues earlier than other common imaging modalities. While the PET scan unit is still a largely untested modality in racehorses, many experts expect it to bring a heightened level of sensitivity to diagnostic imaging of the bone.

The new scanner resembles a wide basketball hoop hovering just above the ground, with a ring of detectors that can open freely. This means that horses won’t require general anesthesia to be scanned. The way it works is similar to a regular bone scan-the injection of a radioactive tracer that will light up under imaging any abnormal areas in the bone. The main difference being, PET scan technology results in a three-dimensional picture as opposed to two-dimensional.