Full-Sister to Mia Mischief Romps to Rising Stardom in Arcadia 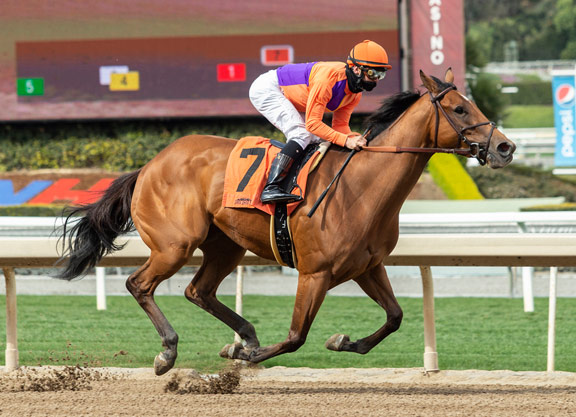 Missy P. (Into Mischief) followed in the hoofprints of her Grade I-winning full-sister Mia Mischief with a dazzling, 'TDN Rising Star'-worthy graduation at Santa Anita Friday. Breaking like a shot from the outside gate, the 2-5 chalk contested the early pace alongside Reem (Danza) through the initial stages before settling a bit to be a h second through a swift first quarter in :22.16. Well clear of the rest of the field, the first timer drew even with Reem leaving the quarter pole and powered clear with ease in the lane under a motionless Flavien Prat, coasting home to an effortless 9 1/2-length victory.

Unlike Missy P., Mia Mischief took two tries to break her maiden, but did so by 16 1/4 lengths at Keeneland in 2017. She has won six black-type events since then, highlighted by the 2019 GI Humana Distaff S. A $135,000 KEESEP yearling buy turned $300,000 FTFMAR juvenile purchase, Mia Mischief summoned $2.4-million from Stonestreet Stables at the 2019 Fasig-Tipton November Sale and was put back in training with Steve Asmussen. She concluded her career with a second in the GI Madison S. in July.

Spendthrift purchased their dam Greer Lynn privately after she RNA'd for $435,000 at the 2007 KEESEP sale and 12 years later they sold her for $700,000 to SF Bloodstock, carrying a foal by War Front, at the same auction as her daughter Mia Mischief. She went back through the ring a year later at Keeneland November, bringing $750,000 from Jane Lyon's Summer Wind Equine with a Medaglia d'Oro foal in utero. Her 2017 filly Lady Tamara (Cross Traffic), also sold at that auction, bringing $430,000 from Larry Best's OXO Equine. Greer Lynn produced a Goldencents filly in 2019, who brought $300,000 from Mike Ryan at the Fasig-Tipton Select Yearling Sale in September. Her War Front foal died and she is still awaiting her Medaglia d'Oro foal. Greer Lynn is a half-sister to GSWs Sing Baby Sing (Unbridled's Song) and Roll Hennessy Roll (Hennessy); SW & MGISP Value Plus (Unbridled's Song); and SW & GSP Majorbigtimesheet (Carson City).