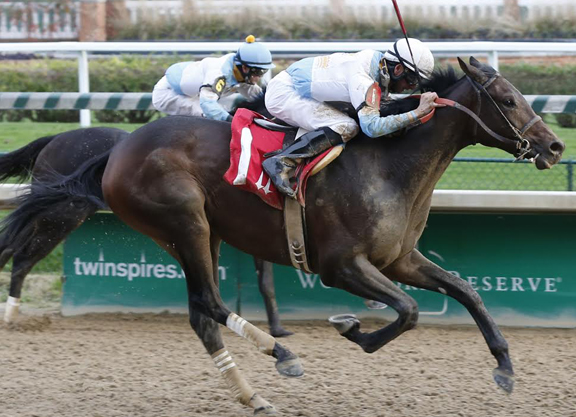 A full field of unexposed sophomores take their respective first steps on the 2016 Triple Crown trail in Saturday’s GIII Lecomte S. at Fair Grounds. Mo Tom (Uncle Mo) is as good a place to start as any, as he checked in a late-closing third last time behind Eclipse finalist Airoforce (Colonel John) in Churchill’s GII Kentucky Jockey Club S. Nov. 28. Mo Tom was beaten just a head that day by Mor Spirit (Eskendereya), who returned to annex the GI Los Alamitos Futurity Dec. 19. Mo Tom, a debut winner at Ellis Park Sept, 5, was transferred to Chris Richard to finish third in an Oct. 8 allowance at Keeneland before besting Tom’s Ready (More Than Ready) by a length in Churchill’s Nov. 1 Street Sense S. He was back in the Amoss barn for the Kentucky Jockey Club. “He’s doing well,” the conditioner said. “He had his last breeze on Monday (five furlongs at Fair Grounds in 1:01 flat {3/33}) and it went well and he came out of it in good shape. I think it’s important to note that although the Lecomte is a nice race, it’s not our goal. We fully recognize that we’re trying to run beyond a mile 70 yards after this week. We know [being a late-running horse], that he will likely have to pass every one of those horses to win, which may or may not happen.” Several runners figure to employ opposite early tactics to Mo Tom. New York-bred Fish Trappe Road (Trappe Shot) makes just his second start outside of restricted company for the always dangerous Bret Calhoun stable. The grey aired by 9 3/4 lengths in the Belmont mud Sept. 11, and found only the well-regarded Get Jets (Scat Daddy) better in that venue’s one-mile Sleepy Hollow S. Oct. 24. Both the third and fourth-place finishers from that heat returned to score. Pinnacle Peak (Yes It’s True) should also show speed. A winner of the Prairie Meadows Juvenile Mile in August, he most recently annexed a track-and-trip optional claimer Dec. 18 by a neck over the aforementioned Tom’s Ready and Dolphus (Lookin At Lucky), a half-brother to Horse of the Year Rachel Alexandra (Medaglia d’Oro) who took his sprint debut here Nov. 22. Tom’s Ready, who is listed as an also-eligible, is expected to draw in with the scratch of sidelined Noble Thought (Harlan’s Holiday). Battle Tap (Smart Strike) will likely skip the Lecomte for a Monday allowance.