Frosted Filly Comes Out Flying to Kick off Keeneland Meet 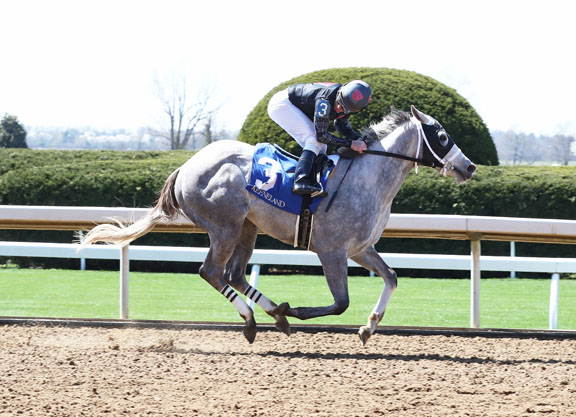 1st-Keeneland, $56,787, Msw, 4-2, 2yo, f, 4 1/2f, :52.15, ft, 3 1/2 lengths.
BOHEMIAN FROST (f, 2, Frosted–Toast of Mayfair, by Speightstown) blasted out of the gate and never looked back to become the first winner at Keeneland's spring meet Friday afternoon. Having prepped for this with a :46 2/5 bullet from the gate here Mar. 21, the grey was pounded down to 9-5 into the face of a 4-5 Wesley Ward shot and soon proved why. With Ward's runner Dream Fly (American Pharoah) missing the break from the rail, Bohemian Frost was almost instantly clear and the grey buzzed along from there en route to a 3 1/2-length victory. Just Fly rallied for second. The winner's dam, who is a daughter of GISW juvenile Appealing Zophie (Successful Appeal), was a five-length debut winner at two herself. Toast of Mayfair, who sold for $325,000 at KEENOV '18 while carrying Bohemian Frost, is also a half to GI Belmont S. winner Tapwrit (Tapit), MGSW Ride a Comet (Candy Ride {Arg}) and Inject (Frosted), a sharp Ellis debutante last summer who garnered 'TDN Rising Star' honors. Toast of Mayfair has a yearling filly by Candy Ride (Arg) and most recently visited West Coast. Trainer John Innis was able to build his arsenal of 2021 juveniles after selling County Final (Oxbow) for a sale-topping $475,000 at last year's Fasig-Tipton July sale. The $9,500 KEESEP bargain buy took his turf sprint debut at Churchill last June before finishing second in the GIII Bashford Manor S. West Point Thoroughbreds and partners bought him at Fasig and turned him over to Steve Asmussen before a victory in Monmouth's Tyro S. Sales history: $42,000 Ylg '20 KEESEP. Lifetime Record: 1-1-0-0, $36,000. Click for the Equibase.com chart or VIDEO, sponsored by TVG.
O-47 Roses, LLC, Sean Speck & John Ennis; B-Woodford Thoroughbreds, LLC (KY); T-John Ennis.