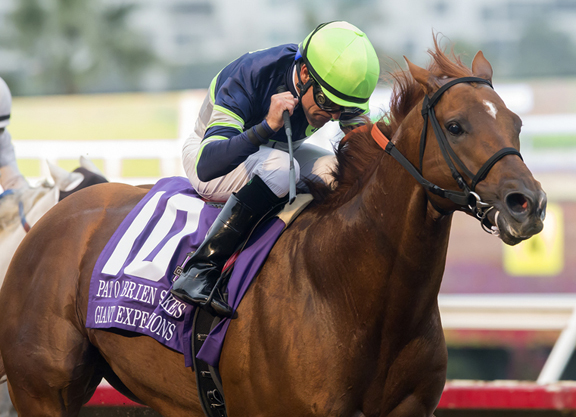 Giant Expectations, a maiden until the end of May, continued his upward trajectory since a confidence-building breakthrough at Belmont in May to make the grade here and stamp his ticket to the GI Breeeders' Cup Dirt Mile. Well-backed from a 12-1 morning line down to 9-2, the chestnut broke well but was unhurried by Hall of Famer Gary Stevens to sit midpack or so while very wide. Uncorking a strong move around the bend to take closer order, he kept on coming past the quarter pole and kicked away from Calculator (In Summation) in the final sixteenth to prevail comfortably.

“He broke sharp and he was right in it,” said Stevens. “I used one of his gears a little earlier than I wanted to to get position. There was some jockeying going on out there, especially between Desormeaux (on Silent Bird) and me. We were going in and out, but my horse loved it (the competition). He's a bulldog. I rode him last time and he ran great. I thought he was sitting on something big. He showed it today. And I think he'll actually be better off if they run him a mile [in the Breeders' Cup]. He'll have more time to settle going into that first turn and I expect he'll run big.”

Giant Expectations ran very well in the first six starts of his career–including a second to Arrogate (Unbridled's Song) last June–and finally put it all together when shipped to Belmont for a New York-bred sprint maiden May 29. He wheeled back just 10 days later to annex a restricted first-level allowance at Big Sandy June 8, and was last seen checking in second behind 3-year-old Gato Del Oro (Medaglia d'Oro)–a well-beaten runner-up in the Shared Belief S. earlier on Saturday's card–going eight local panels July 19.

“He showed up today and I'm really proud of him. Gary chose him over Kobe's Back (Flatter) basically because of the youth, this horse is four. I didn't think he would run this big, but I'm glad he did. We're pretty happy right now.”

Giant Expectations has a yearling full-brother.