Home » Archive » Shared News » From the TDN Weekend: Porter, the Definition of Good for the Game

From the TDN Weekend: Porter, the Definition of Good for the Game 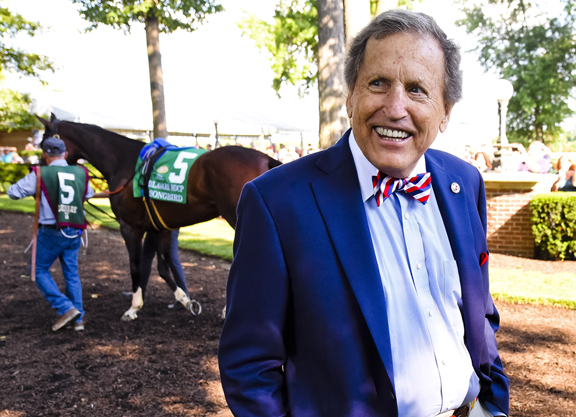 When Songbird topped the Fasig-Tipton November sale at $9.5 million, it capped off a year of good news for Rick Porter which had seemed hard to anticipate just a few months earlier.

Since buying his first racehorse in the early nineties, Rick Porter has owned some of the best horses in the business. Horse of the Year Havre de Grace carried the red and white silks of Porter's Fox Hill Farm to a trio of top-level successes, including a defeat of males in the 2011 GI Woodward S. at Saratoga, and was named that year's champion older mare in addition to Horse of the Year honors. Hard Spun provided Porter with what he calls one of his greatest achievements when winning the 2007 GI King's Bishop S. and now stands stud at Darley America.

That prestigious list of Grade I winners is capped by Porter's most recent female sensation, the mighty Songbird, a two-time champion, nine-time Grade I winner and earner of over

$4.6 million, who is cherished by American racing fans almost as much as she is by her owner.

“I can't imagine having a horse give you more excitement than Songbird,” Porter said. “She was unbelievable. And her fan base! When we retired her, we had over 200,000 hits on our Facebook page.”

Many people would think it would be difficult for a man like Porter, who has had so many exceptionally talented horses, to choose just one as his favorite. However, Porter did not even hesitate for a moment when naming Songbird as not only his favorite, but his best runner to date.

“Songbird, no question,” he said. “Havre de Grace was a great horse, but she didn't get the excitement. She sure was fun to watch and if she hadn't gotten hurt in that race in New Orleans, we would have kept going. I would have done the same thing with Songbird. I would have campaigned her as a 6-year-old if I could. Give me a Beholder!”

When asked if he was ever tempted to keep his top mares, such as $10 million FTKNOV record setter Havre de Grace, Porter said, “I am not into breeding. The deal is if you are going to spend a lot of money, you have to get those checks back that you make out to Keeneland and Boyd Browning. I think of it more as pride that they are so in demand and people want to buy them. I am hoping they have great success with the offspring. People think you can make money in purse income, but there is no way. You can make money on one horse, sure. I made a lot of money on Songbird, but I have all these other horses with training, bills, vet bills, etc. The only way you are going to get it back is selling a $10 million mare or $30 million stallion.”

At the time of this interview, Porter said, “I am sad to see her go, but I am hoping Mandy Pope buys her!”

Two months after making that statement, Porter's wish was granted as Pope, who also purchased Havre de Grace, stretched to a sales topping $9.5 million to take her home.

A Bright Light in a Time of Darkness…

Songbird's importance to Porter extends beyond the thrills, big purses and prestige. The popular dark bay was a shimmering light during a dark time in the Delaware native's life as he battled a type of lymphoma called Waldenstroms.

“My family was the main thing that kept me going, but thinking about her next race kept me distracted and gave me something to look forward to,” said the father of three. “I was diagnosed in 2001 and the cancer was indolent, which means very slow growing. I got treated for that twice with chemo in 2015 shortly before the Breeders' Cup at Keeneland. Everything went fine and they said all the scans look good, we will see you in six months.”

He continued, “In April of 2016, we had just gotten back from the Santa Anita Oaks that Songbird won, and I started getting sick with fevers and night sweats. I ended up in the hospital in Florida. We found out I was very, very sick. The cancer had transformed, which only happens in about 2% of the cases, into very aggressive large B-cell lymphoma. They tried chemo, but it didn't last more than a few months. They tried another chemo, which didn't work at all. They said there was basically nothing else they could do for me.”

Given this news, Porter began to make some changes, including telling his longtime bloodstock advisor McGreevy that he was free to pursue other clients as Porter was unsure if he would be able to buy more horses going forward. Earlier this year, however, Porter got into a clinical trial at Massachusetts General Hospital focused on CAR T cells that was a bit of a hail mary.

To read the rest of this story in the TDN Weekend, click here.