From the TDN Weekend: Cozmic One Shines New Light on OTTBs 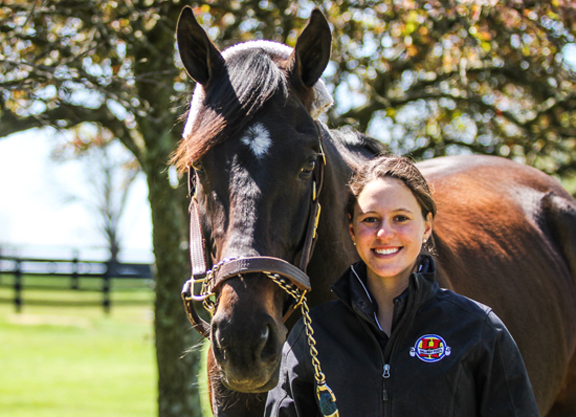 He was the first foal out of superstar Zenyatta, so the connections of Cozmic One (Bernardini) hoped he would follow in his Hall of Fame dam's hoofprints on the racetrack, but, unfortunately, the son of Bernardini did not inherit the talent both his dam and sire possessed. The dark bay never finished better than fourth in five starts between 2015 and 2017 for trainer John Shirreffs, who also conditioned Zenyatta during her illustrious career in which she won 19 of her 20 races and earned over $7.3 million.

While Cozmic One may not have been a star on the racetrack, he is already shining in his new career as a show horse under the care of 17-year-old Isabela de Sousa. Don't let her age fool you; de Sousa displays the poise and maturity of someone twice her age and is already an accomplished equestrian, who is well-known in the off-the-track Thoroughbred world. The Kentucky native has won the show jumping competition at the Retired Racehorse Project's annual Thoroughbred Makeover the past three years in a row and hopes to continue that streak with Cozmic One in October.

“This horse really enjoys himself in his new career. He's really found his calling,” said de Sousa, whose previous RRP winners include Dewey Square (2015), Carajillo (2016) and Late Night Mark (2017). “When I had my first ride on him, I thought he was really smart. He knows what he is doing with his legs and where his body is. It takes some horses a lot of time to figure that out. Our first time jumping, he was a natural. He is very brave and really willing.”

“Isabela is not only an extremely talented rider, but an incredible ambassador for off-the-track Thoroughbreds, so when we heard she was taking on Cozmic One as her 2018 Thoroughbred Makeover project, we couldn't have been more thrilled,” RRP Executive Director Jen Roytz said. “With Isabela, Cozmic One will get a solid foundation of training that will serve him well throughout his show career. There are thousands of Zenyatta fans who were so eager to watch her first-born compete on the track and now Isabela is bringing them along for his journey from the racetrack to the show ring.”

In order to be eligible for the 2018 Makeover, the horse must have a published workout or race after June 30, 2016 and cannot have started the retraining process before Dec. 1, 2017, which means the Thoroughbreds come into the competition with 10 months of training or less in their new careers. Making his final start Oct. 20, 2017, Cozmic One had his last workout in November and shipped to the de Sousas' farm in Kentucky two weeks later.

“Of course you feel the pressure of having your horse ready in 10 months, but I think of the Makeover as a halfway point, not an end point,” de Sousa said. “You get to see how far your horse has come and how much further he can go. There are 10 different disciplines there and everyone wants to see the horses do well.”

de Sousa's father Sergio, who is the managing partner of Hidden Brook Farm, scouts out his daughter's RRP projects, with Isabela's input, of course. He also offers her advice along the way and is her “ground man,” setting up the jumps, shipping her to shows, etc.

“My dad really understands Thoroughbreds and he has taught me how to speak Thoroughbred,” said Isabela de Sousa, while petting Cozmic One as he hung his head out of his stall and over his young rider's shoulder, nuzzling her for attention. “He has so many connections in the Thoroughbred business, so he finds my Makeover horses and just consults me for a second opinion.”

Sergio de Sousa originally inquired about Cozmic One for the 2017 Makeover, but the horse's owner/breeders Jerry and Ann Moss wanted to give him a little more time on the racetrack.

“This year, they approached us and asked if we would still like to give him a try, and we said of course,” Isabela de Sousa explained. “So, we co-own him with the Mosses. They really love this horse.”

Click here to read the rest of this story in July's edition of TDN Weekend.