Home » Archive » Europe » From Teaser to Pleaser: The Tale of Tiberian

From Teaser to Pleaser: The Tale of Tiberian 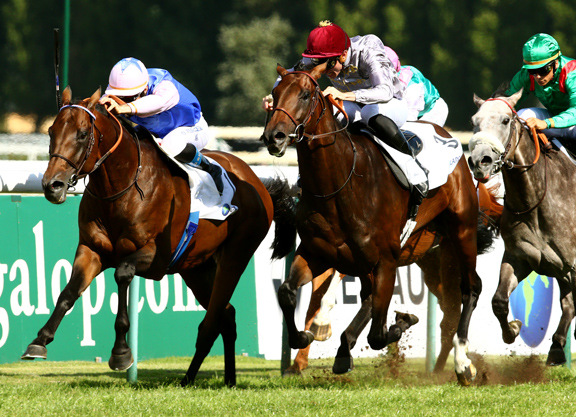 As the covering season gets underway, if ever there was a feel-good story to counteract some of the more commercial starkness of the modern-day breeding industry it is the tale of Tiberian (Fr). The horse conceived to give his sire Tiberius Caesar (Fr) some respite from the frustrations of his day job as the teaser at Haras du Logis went from being something of a peculiarity to a group-winning globetrotter who has now earned the chance to make his mark on the breed.

The first foal and now one of 27 registered offspring from six 'crops' for Tiberius Caesar, Tiberian was bred by a partnership which involved two of the breeders of his sire, Haras du Logis owner Julian Ince and Heiko Volz, along with Stefan Falk. And it wasn't long before the three friends realised that they had a serious prospect on their hands.

Sent into training in Senonnes with Alan Couetil, Tiberian won for the first time on only his third start at three and notched another victory before finishing second to the Aga Khan's subsequent multiple Group 1 winner Vazirabad (Fr) in the G2 Qatar Prix Chaudenay at the Arc meeting. As a 5-year-old, he won four stakes races, including the G2 Grand Prix de Deauville, after which he headed south to take on some lofty competition in the Melbourne Cup, in which he finished seventh behind Rekindling (GB). Now eight, Tiberian has surpassed his own sire's standing by being given an official stud berth at Larissa Kneip's Haras de Saint Arnoult in Normandy.

“It's a really great story and it's a typical example of what makes people in the racehorse business go on dreaming,” says Kneip, a native of Luxembourg who eschewed a career in broadcast journalism to pursue her own dream of running a small stud farm. That initial enterprise at Exmes, not far from Tiberian's birthplace, has since expanded in size and scope to incorporate a separate stallion unit, a breaking and pre-training yard and a training centre.

Kneip is very much to the forefront of all these activities, as a licenced trainer, owner, breeder and sales consignor. And she is clearly devoted to the five stallions in her care at the new farm purchased recently from fellow breeder Hubert Honore. It is predominantly a young roster, with Tiberian this year's new boy, following on from last year's recruits Dschingis Secret (Ger) (Soldier Hollow {GB}) and Seabhac (Scat Daddy). The line-up is completed by Sommerabend (GB), a Group 2-winning son of Shamardal with a similarly robust racing profile to Tiberian, albeit over shorter distances, and finally the 17-year-old G1 Prix Jean Prat winner Stormy River (Fr) (Verglas {Ire}).

“He ran in races that everybody dreams about,” says Kneip of Tiberian as he parades in front of his new stablemates. “He's a multiple group winner and he's been Group 1-placed and has been a real globetrotter. He went to Australia to race in the Melbourne Cup, he went to Hong Kong for the Hong Kong Cup, he went to Royal Ascot, Baden-Baden, and he ran in the Arc in France. He was always trying to give his best.”

Tiberian is, as Julian Ince likes to sing in the style of Dusty Springfield, 'the son of a teaser man', but while he is not exactly bred in the purple, he is also not lowly born. His sire, whose stud fee is set not in Euros but in cases of rose, was eventually reunited with his breeders Ince and Volz when they bought him out of a claimer. But the best of Tiberius Caesar's four wins came in a Group 3 in Bremen and the son of Zieten was a hardy horse with 30 starts to his name. The mare selected to give him his first proper tryst at Logis, which resulted in Tiberian, was the treble winner and listed-placed Toamasina (Fr) (Marju {Ire}). Of the stallion's 12 other runners of racing age, he has been represented by another two winners, six-time scorer Magnentius (Fr) and the useful Yellow Storm (Fr), who finished eighth of 16 in the 2017 running of the G1 Prix de Diane.

As Kneip outlines, Tiberian is likely to have broad appeal at stud in France, a country with a record of breeding outstanding jumpers as well as Flat horses.

She says, “He's got bone, he has great amplitude in his stride, and he had excellent staying power with good finishing speed. So I think he has all the right stuff to be a good Classic distance or National Hunt stallion, and here in France National Hunt is a big thing.”

Similar prospects apply to Dschingis Secret, who is one year ahead of Tiberian at stud and is already represented by a handful of foals at Saint Arnoult. The 7-year-old was bred by Helmut von Fink, the owner of leading German sire Soldier Hollow, at his Gestut Park Wiedingen. The first foal of his dam Divya (Ger) (Platini {Ger}), Dschingis Secret went on to become a champion in Germany, winning six group races including the G1 Grosser Preis von Berlin, in which he beat dual Coral-Eclipse S. winner Hawkbill (Kitten's Joy).

“We were very lucky to get him, he was an extraordinary racehorse and he is the highest-rated son of Soldier Hollow, who is the three-time German champion sire,” says Kneip. “He's beautifully bred, his dam line goes back to an American mare [the Windfields-bred] Diana Dance, a daughter of Northern Dancer, who was bought at Keeneland and imported to Germany. Dschingis Secret was the first foal of Divya and so far all four of her runners have black type.”

These include two full-brothers to Dschingis Secret–Dschingis First (Ger), who topped the BBAG Yearling Sale at €500,000 in 2017, and Destino (Ger), who has recently been retired to stand at Gestut Westerberg in Germany.

There is diversity in the Saint Arnoult stallion barn, however, particularly when it comes to last year's signing Seabhac, whose name, Kneip explains, is the Gaelic word for Falcon. (She also included on his advertisements for those unfamiliar with the language that his name is pronounced 'Shoke').

“He's a big, typically American type of horse which I personally love,” Kneip says. “Scat Daddy is the stallion we all regret losing so early so I really wanted to try to source a son of his somewhere in the States and I was lucky to get in early. Unfortunately Seabhac had an accident as a 3-year old, but I was in the market to get him and I immediately jumped at the chance to stand him.”

She adds, “He's a very young stallion who started covering at the age of four last year and he covered 85 mares. I'm very excited about him. He's good-looking and is a very calm guy.”

The eminently capable Kneip switches roles with apparent ease. From showing off the first two foals of Dschingis Secret at her farm one day, she is saddling a winner at Cagnes-sur-Mer the next, and she consigns plenty of horses for the sales, from foals and yearlings to breezers.

As an amiable pygmy goat named Passe-Partout roams freely around the yard after helping himself in the feed room, Kneip says with no little irony, “Haras de Saint Arnoult is a bit of peculiar stud.”

Peculiar, maybe, but also one run with a high level of competence and with the purest intentions of breeding at heart.

She adds, “We don't really specialise in one particular thing but we are really trying to produce racehorses and we are producing them right from the start. What do you need to breed a horse? A mare and a stallion: well, we've got mares and we've got stallions. What do you do with the foals? You can either send them to the sales as yearlings or to the breeze-up sales as 2-year-olds, which we have also been doing quite successfully […] or you can send them racing.

“I always felt that it was a bit frustrating if you had gone through so much pain and effort to raise them and then they leave and it's up to somebody else to do their racing career, so I decided to take out my trainer's licence so I could follow through with the horses myself until they go racing.”

She is, however, understandably realistic in her aspirations as a trainer given the demands on her time from the other facets of the stud business.

“I'm not trying to be the next Fabre and I don't want to have 200 horses in training,” she states. “It's basically for our own horses and for horses bred at the farm who have owners who enjoy working with me. Most of our success has been with horses born and raised here.”