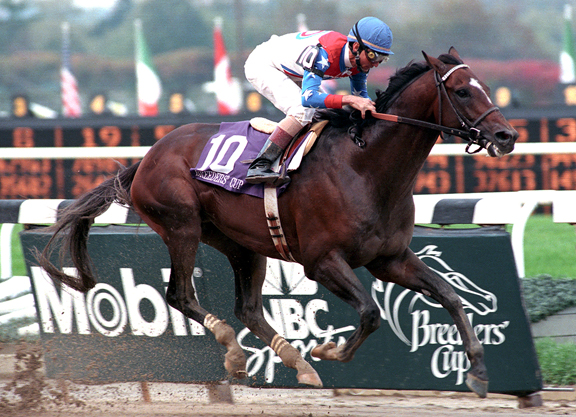 Twenty-five years ago, Cigar put together a perfect 10-for-10 season in the middle of a streak of 16 straight wins. We remember it here.

It was the sixth race on an ordinary Friday card in October at Aqueduct some 26 years ago and there was nothing to suggest that the $34,000 allowance event would ever have any relevance. Jose Santos was aboard the favorite, a recent allowance winner who started out at Suffolk Downs named Golden Plover. Julie Krone had the mount for Tom Skiffington on second-choice Taddarruj. The third choice in the field of six was a Bill Mott-trained 4-year-old making the switch over to dirt after a lackluster 11-race run on the turf. His name was Cigar.

That’s where and how it began, on a quiet fall day at the Big A when no one could have seen this coming. Owned by Allen Paulson, Cigar started off his career in California for trainer Alex Hassinger, Jr., winning just two of nine starts. Transferred to the barn of Bill Mott, he lost another four straight races, all of them allowances on the grass. Perhaps the shift to the dirt would help. They were running out of options.

“It was just the process of elimination for us,” Mott said. “We tried him on the turf and that wasn’t working out well enough, so we switched him to the dirt. There was no magic in it.”

Cigar was dominant that day, winning by eight lengths. Twenty-one months, nine racetracks and two countries later, Cigar had pieced together an historic 16-race winning streak that is among the most extraordinary feats put together by a modern horse. It was the streak that would earn him two Horse of the Year titles, 11 Grade I wins, a spot in the Hall of Fame and legendary status. It was a streak that, for those who were part of it, will be forever etched in their memories.

I was fortunate to be there for almost all of it, 14 of the 16 wins. That was at a time when newspapers still mattered and not all had given up on horse racing. I was the racing writer for the New York Daily News, which allowed me to dart around the country, and to Dubai, to follow this horse.

“Greatness is neither easy to describe nor to qualify, but the criteria surely includes the ability to rise to any challenge, to be invincible,” I wrote after Cigar won the 1996 Dubai World Cup, his 14th straight win. “This is Cigar, a champion.”

Such breathless praise might ordinarily seem over the top, but not with this horse. He did what no other horse had done since the great Citation in 1948, who also won 16 in a row. Always show up. Always win. As the streak stretched on, through New York, California, Massachusetts, Florida, he really did seem to be invincible.

“Somebody asked me one time, ‘Was he the best horse that you ever rode?'” said Jerry Bailey, who was aboard Cigar for 15 of his 16 wins during the streak. “I think he’s almost the best horse anybody could have ever ridden.”

Click to continue reading and to watch the tribute video at TDN Look.