From Champion to 'Babysitter,' Main Sequence Still Producing for Motion 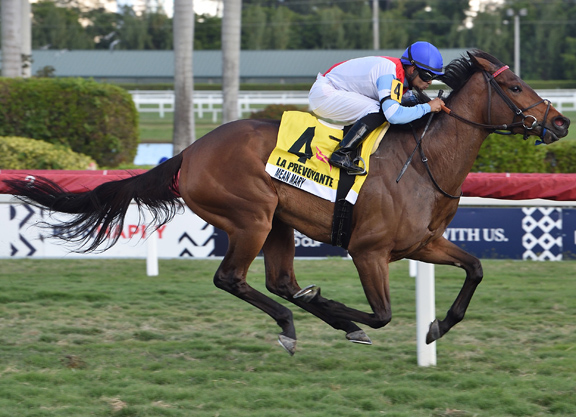 Every trainer deals with difficult horses, and sometimes they work out and sometimes they don't. There was a time when Graham Motion didn't know whether Mean Mary (Scat Daddy) would fulfill her potential. Owned and bred by Alex Campbell Jr., she was that tough.

“You had to have your best rider on her,” Motion said.  “You had to have her on the pony or she'd pull some antics going to the track. Nothing that was unmanageable, but something you always had to be ready for. She was just very tough.”

Today, Mean Mary is a stakes winner, a feat she accomplished in last Saturday's GIII La Prevoyante S. at Gulfstream. Perfectly well behaved throughout, she led every step of the way on her way to a five-length victory under Luis Saez.

Motion deserves credit and so does Saez. But they may not have been able to engineer the La Prevoyante win if it were not for an assist from 2014 GI Breeders' Cup Turf winner Main Sequence (Aldebaran).

Main Sequence is an 11-year-old gelding who was trained by Motion. A four-time Grade I winner who was named champion older horse and champion turf horse in 2014, he's now more or less a pet who lives with Motion's stable at the Fair Hill training center. He's turned out, living the good life.

With Motion struggling to get Mean Mary to settle down, his wife, Anita, and his assistant, Cat McGee, came up with the idea of turning Mean Mary out in the same paddock with Main Sequence. Maybe something would click.

“We hoped that being turned out all the time would settle her down,” Motion said. “We would turn her out in the morning, train her and then turn her out for the rest of the day.”

But would Main Sequence accept the presence of the filly in his paddock? That was hard to predict and the odds were against it as Motion describes Main Sequence as “pretty cantankerous.” It turns out that there was something that drew them together.

“We just thought it was worth a try,” Motion said. “He was almost like a babysitter. Was he the boss? Probably. But they were very compatible. They sparked this relationship as soon as they were turned out together. They got along great. As nasty as she could be she always got along very well with him and it seems like she turned the corner after we put them together.”

Motion can't tell you why the two got along so well together.

“It's hard to say. It's just part of nature,” he said. “He's not like that with every horse. He's not accepting of every horse he goes out with. He's more accepting of fillies, but it's odd with her personality that they were so accepting of each other.”

When Motion shipped Mean Mary and several other horses to Florida it meant that the Main Sequence-Mean Mary friendship would have to be put on hold. But this was now a different Mean Mary than the one who had been giving his trainer so many headaches.

“You still have to watch her and we still tend to keep her on the pony most of the time, but she's mellowed a lot,” Motion said.  “She is actually a kind horse to be around. As she has raced more and more she has become more professional.”

Mean Mary broke her maiden at Keeneland in her second career start. Two races later, she won a mile-and-an-eighth allowance at Gulfstream. The big unknown in the La Prevoyante was the mile-and-half distance. With the way Mean Mary ran, it looks like the added distance is something she relished.

“I'd like her to be around for the major races later in the year,” Motion said. “I doubt we'd run her again before we get to Keeneland because Mr. Campbell is pretty partial to Keeneland.  We would love to make the (GI) Beverly D. with her. Her style could make her very dangerous in these longer races. She won the race the other day with ease and she ran a decent number. That makes you think she can be competitive in the big races this summer.”

Those are big goals, but Motion believes Mean Mary has the talent to win Grade I races. Would that be the case if not for Main Sequence?

“It would have been tough to get through this if we didn't have the environment we have at Fair Hill, where you can turn horses out,” he said. “If not, it's possible I would have had to send her somewhere else. If we didn't do what we did with her, it's possible that we wouldn't have been able to bring out the ability that she obviously has.”