From Blazing Trails to Changing Lives 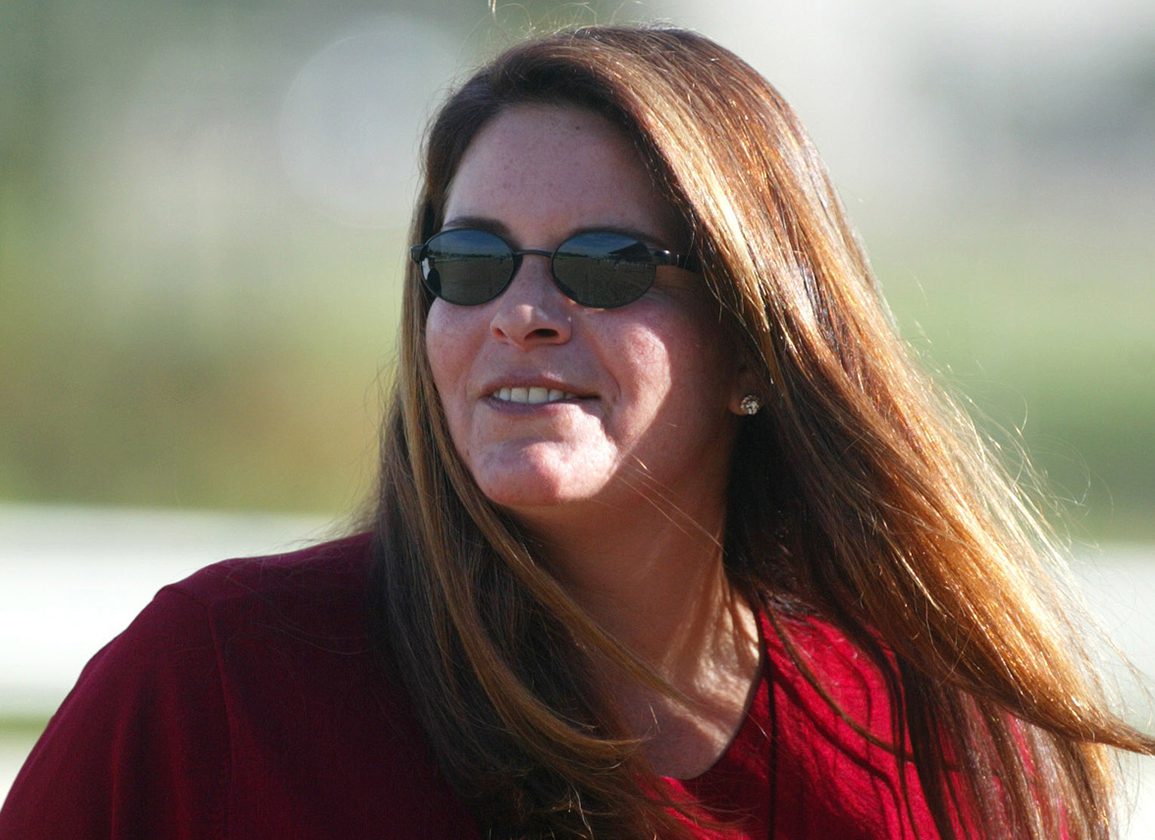 Long before Shannon Arvin made headlines as the first female president and CEO of Keeneland and Jessica Paquette was named the first female full-time announcer at a major racetrack, Jenine Sahadi was breaking barriers as the first female trainer to win the Breeders' Cup. However, unlike the others, Sahadi made her mark and stepped away at the peak of her career. She now devotes herself to making a difference on the backstretch as the president of the Edwin J. Gregson Foundation.

More than two decades into her time with the organization, Sahadi and the Foundation are so intertwined it's impossible to separate the two.

“It's been so long since I've trained a horse and my focus is now the Foundation,” said Sahadi. “This has been 22 years of my life. We started it with nothing and now we're getting to the place where we are flush enough to be able to jump in and help the second we need to.”

Sahadi is modest about her part, but the Foundation literally changes the lives of backside workers in California. Best known for granting scholarships–more on that in a moment–the Foundation does everything from help with childcare, assist with taxes, take backside kids on fishing trips and to Dodger games, organize soccer tournaments, provide Christmas presents for children, and more. A pilot program this past year involved summer daycare assistance at Del Mar for workers whose extended families had to stay behind at Santa Anita. The Foundation steps in wherever needed, whether it's the fostering of community or arranging babysitting so parents can do their jobs caring for the horses.

“It's the little things that no one knows about that I love,” said Sahadi. “You know, every year we have people sit at the track and do tax preparation. It's the kind of program that encourages everybody to get their taxes done and I think it encourages responsible behavior. It's a win-win for everybody. But it's things like that, the nitty-gritty boots-on-the-ground work, that you wouldn't normally think of that are the types of programs we're super proud of.”

Education is the Foundation's main focus and the most visible one. Since 2001, Sahadi and her cohorts have raised over $6.5 million and have provided scholarships to 281 individual children.

“There have been 742 grants provided,” explained Sahadi. “The kids do an application very similar to many college applications; their parents must work on the backside.

“I think everybody deserves an education. It's invaluable. It's very important for kids to be able to learn and walk away with something, some sense of pride. I think a degree is probably the biggest sense of pride that you can find.”

While there are plenty of wildly successful stories among the Foundation's graduates and plenty who knew what they wanted to accomplish from the start, it might be the ones who need a little extra guidance who are closest to Sahadi's heart and harken back to her training days the most.

“Some take longer to find their way than others,” said Sahadi. “I always say horses are just like people: you've got to treat each one individually and they'll get there in the end when they can explore what they're capable of. Sometimes they have no idea. It's just remarkable.” 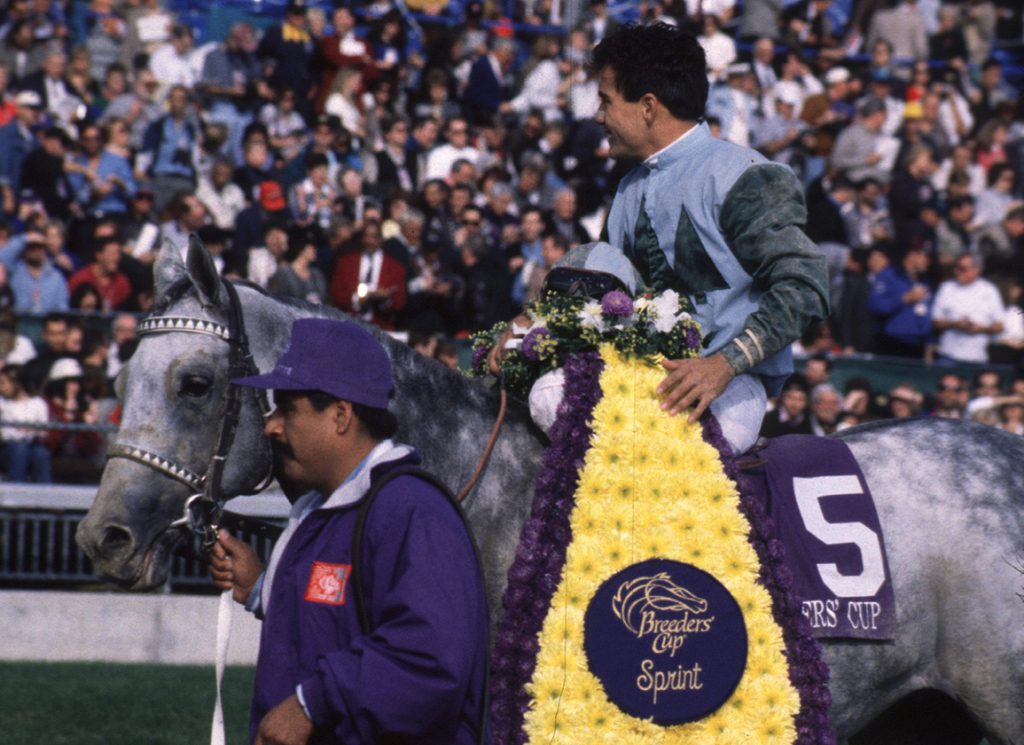 Sahadi and the Foundation team treat every backside kid on a case-by-base basis according to their needs and work with them to attain their educational goals. Some have gone on to vet school or pursued higher education; one became a dental hygienist, one is an architect, another works at Ford as a mechanic, yet another is currently at Tulane in medical school.

“They run the gamut,” said Sahadi, “and they seem to be making really wise decisions, following their hearts. Once we identify what their need is, the goal is to try to eliminate the burden of debt as much as we can for them. We try to be very helpful in applying for federal and state grants. We have situations where maybe the kids are not sure what they want to do yet, so we'll help them go to a community college for a year or two and then transfer into a university once they have a better idea. We'll offset book costs, laptop costs, whatever else is needed. We are willing to make some fast decisions and do what is needed. Who wants a kid to lose an experience or struggle?”

The Foundation got its start as an idea under the California Thoroughbred Trainers (CTT), but blossomed after the death of trainer Edwin J. “Eddie” Gregson in 2000 as his colleagues sought a way to honor him. Gregson is best known publicly for winning the 1982 GI Kentucky Derby with Gato Del Sol, but was better known among his friends and family members as being willing to give the shirt off his back to anyone in need. His wife, Gail, is still on the board.

“It really came to fruition after Eddie passed away and as time went on, we morphed as we figured out a way to honor Eddie's legacy,” explained Sahadi. “He was very philanthropic and big on education. He was just a very generous guy. If somebody walked up to him and said, 'Can I borrow 20 bucks?' he'd give you 40. That's just the kind of guy he was.” 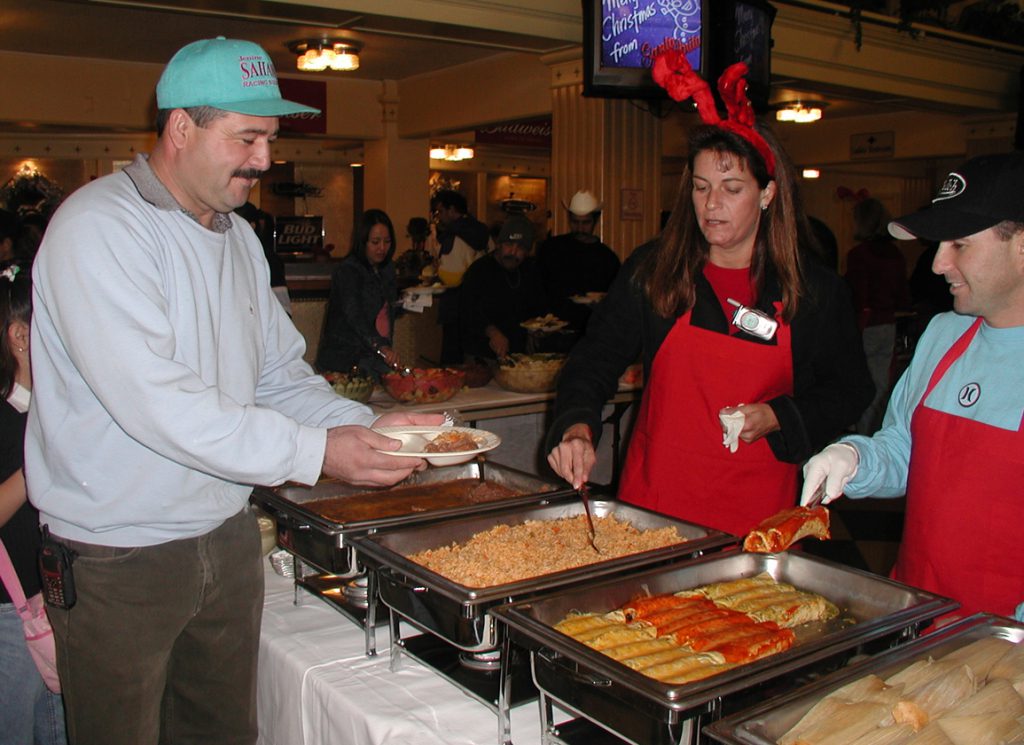 Sahadi was named president of the then-fledgling Foundation in 2001, a full decade before she would leave the training ranks and devote herself to the organization. No one could have imagined how it would grow in the more than 20 years since that time and how many lives would be impacted for the better. It started with the broad vision of enhancing “the quality of life of California Thoroughbred horse racing's backstretch workers and their families” and has developed into a vital part of California racing.

“It's a game changer and I just love it,” said Sahadi. “Every year as we've gotten a little bit more of a cushion, we've been upping the amounts of help [we can give]. It's been almost $1.9 million in scholarships alone since we started. It took a long time before we got rolling, but we're very proud of all these kids who have gone through the program.”

Sahadi practically grew up at the racetrack herself. Her parents, Fred and Helen Sahadi, began claiming horses in the 1960s and built Cardiff Stud Farm, which they would eventually sell to the late Alex Trebek of “Jeopardy” fame. Her father founded Barretts Equine Ltd., the auction company so prominent in California for so many years. And Sahadi herself was mentored by the late Charlie Whittingham, as well as Ron McAnally, with whom she is still close. Out of college, she worked first for seven years on the frontside at Hollywood Park.

She began training in 1993 and quickly broke through on a major stage, becoming the first female trainer to hoist a Breeders' Cup trophy when Lit de Justice won the Sprint in 1996. The next year, she did it again, with Elmhurst giving her back-to-back Sprint wins.

A handful of other women trainers have followed her in the Breeders' Cup's winner's circle, including Laura De Seroux with Azeri's Distaff in 2002 and Kathy Ritvo with Mucho Macho Man's Classic in 2013, yet not only was Sahadi the first female trainer to win the Breeders' Cup, she remains the only one to win more than once.

During her 18 years as a trainer, Sahadi's 441 wins included 86 black-type victories and 45 graded wins. Among the additional Grade I winners she developed were Grand Flotilla, Fastness, Rainbow Dancer (Fr), The Deputy (Ire), and Golden Ballet. And then, at the height of her career, she stepped away. 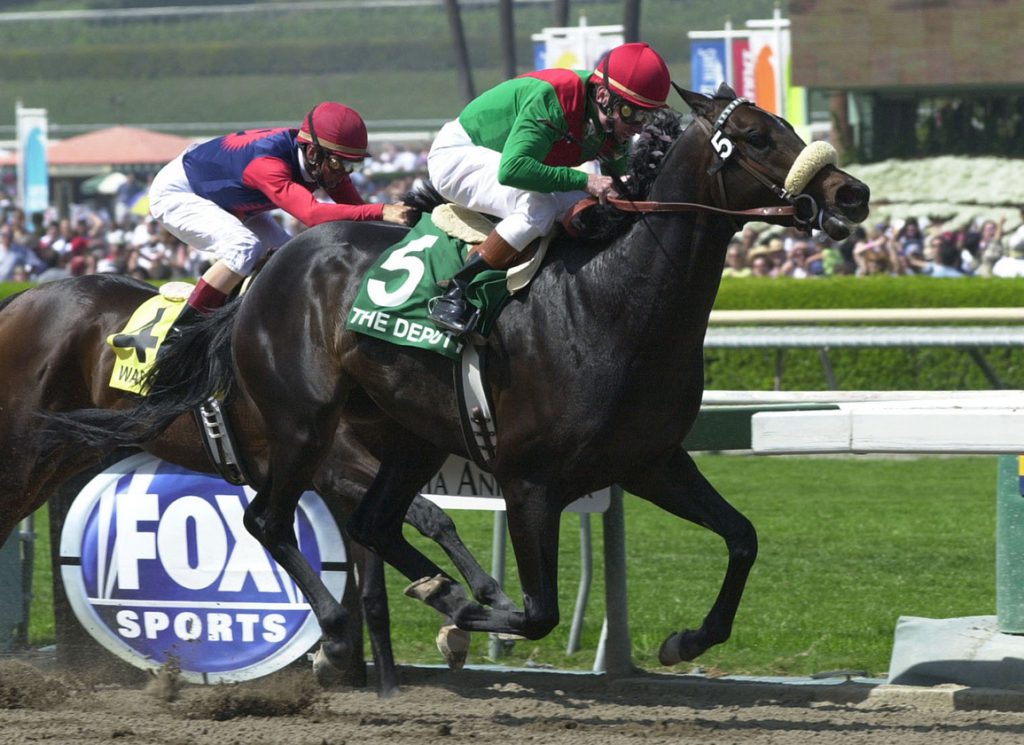 “I loved it, but it's a lot and the game is different now,” said Sahadi. “I was always very vocal, very political, president of the CTT for many years. I didn't really love the direction that racing was going. Regardless of what the achievements were or whatever, for me it was always just about taking care of the horse and being bluntly honest, sometimes to my own detriment. I always just tried to be a purist and never had a drug positive ever.

“Now we're in this sort of new realm where even a therapeutic medication is maybe not legal,' continued Sahadi. “If we as an industry are going to keep conflating legal therapeutic overages with PEDs and dopers, I think it's really dangerous and bad for the overall health of the industry. I hate it because I feel like we all need to be loyal to the game and to take care of it.”

The loss of Sahadi to the training ranks is the backside workers' gain. The Foundation has changed and grown since she took the helm more than two decades ago, but the legacy is secure. Not only have hundreds of lives already been impacted for the better, but the Foundation is poised to continue evolving with the needs of the backside. 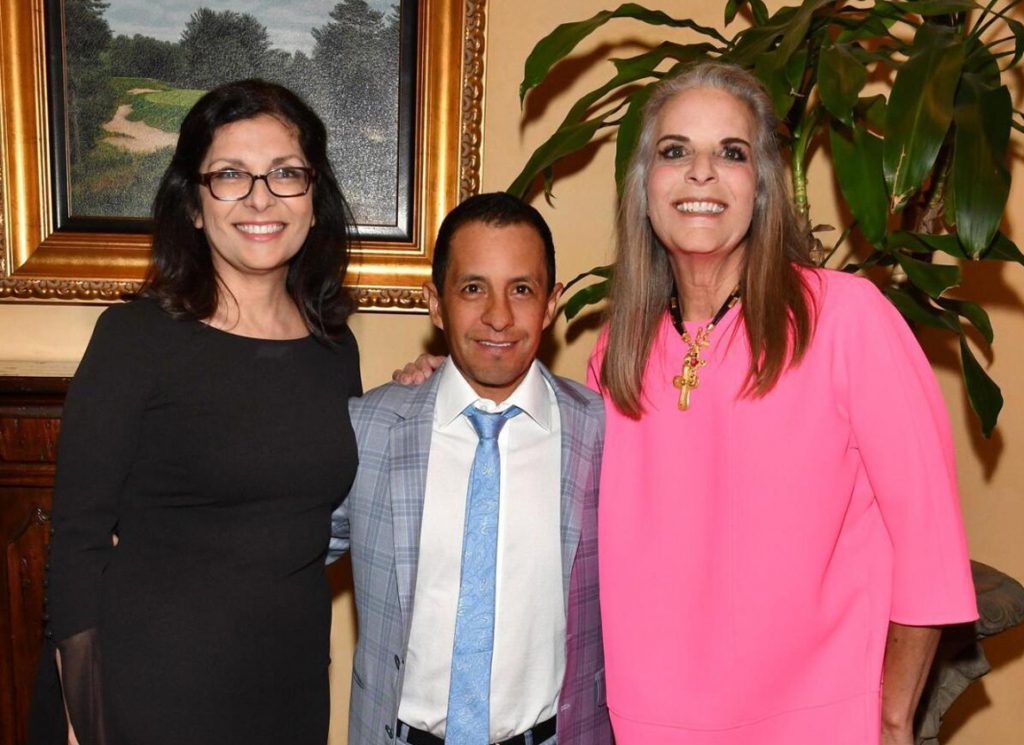 “We want to keep doing what we're doing, try to pivot and jump in and help. Since we're the bricks and mortar, boots-on-the-ground kind of people, the Foundation jumps in the second that we need to if there's a problem that arises that we weren't expecting. We will hopefully keep improving and reinventing programs. Our board is just phenomenal. Everybody sort of has their role.

“We are just trying our best to make a big difference and not make a big deal about it,” said Sahadi. “I don't think anyone on the board is looking for a pat on the back. That's not really what our motivation is, even though I personally am so grateful to so many of them. If somebody needs something, we're going to try our best to figure out how to get it done as much as we can.”

Sahadi is quick to point out the Foundation is not just her.

“I'm just kind of the mouthpiece. I'm so grateful for everyone who has been loyal to this Foundation. They've made the difference; it really has nothing to do with me. It's the board. [Foundation secretary] Angie Carmona is a saint. She is invaluable. None of this would be possible without Angie. She knows all the backstretch workers by name. I can help raise money, but she is the one that really does the day to day.”

As the Foundation's board quietly goes about serving backstretch workers, Sahadi says she doesn't mind that other non-profits in racing are far more visible.

“I love any philanthropy that goes on in horse racing,” said Sahadi. “With all the aftercare and everything, it's almost overwhelming. There's so many to pick and choose from.”

For the backstretch workers in California though, likely nothing beats the Gregson Foundation. Sahadi agrees.

“You get a little weepy when you watch these kids and they just excel. When one graduates or gets a job, the parents are so proud of their children when you see them at the racetrack. They're genuinely grateful and it's the best feeling in the world.”

For more information on the Foundation, visit gregsonfoundation.com.