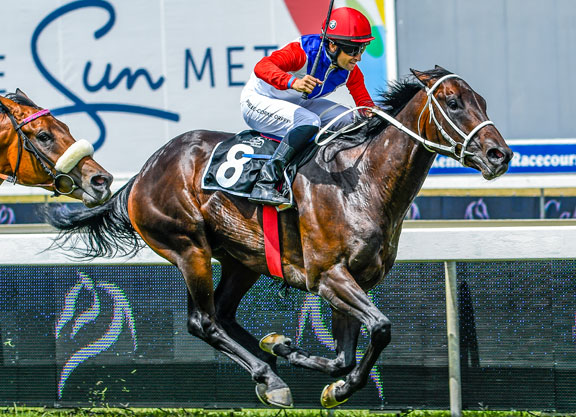 They say winning is more fun with friends, and that was certainly the case on Saturday for The Big Five Syndicate-a group of familiar industry faces from Ireland and the U.S.-as it celebrated its victory in the CTS 1600, Africa’s joint-richest race with a purse of R5-million (£252,322/€300,317), at Kenilworth Racecourse in Cape Town, South Africa, with the ascendant 3-year-old colt Count Jack (SAf) (Jackson {SAf}).

The Big Five comprises Mick Flanagan, Tom Ryan, Craig Bernick, David Cox, Justin Casse, Ross Doyle and Anna Doyle, the latter of whom was in Cape Town to collect the trophy with husband Peter. The CTS 1600 was one of two sales races staged on the G1 Sun Met undercard, in addition to the CTS 1200. Both are non black-type races restricted to graduates of Cape Thoroughbred Sales yearling sales and are the joint-richest races in Africa with purses of R5-million apiece.

About an hour after the race on Saturday afternoon, Mick Flanagan was heading into Dublin to celebrate at the rugby with Ross Doyle and David Cox, and he explained how he and Ross Doyle landed on Count Jack for R250,000 (£12,616/€15,016) at the 2018 Cape Premier Yearling Sale.

“When I was starting out, I used to tag around at the sales in Johannesburg with Peter Doyle, so for the last five or six years we all met down there after Christmas in January and that year we teamed up and bought a couple horses,” Flanagan said. “The other horse we bought, he won a couple races and we sold him on to Mauritius. We saw this colt at the Kieswetters’ farm [Highlands Stud, in the Western Cape and formerly owned by the Beck family] and liked him. We all sat with each other at the sale and ate and drank together, and ended up buying him together.”

Flanagan is well-versed in the South African industry, having spent some of his formative years working in the nation.

“We’ve been going down to South Africa for years,” he said. “I first started going there when I was about 19 or 20. I worked for Mick Goss at Summerhill Stud and then was an assistant to Mike de Kock, so I’ve always had a bit of an attachment to the country. I try to go down there once or twice a year. It’s a pity I couldn’t be there today but we will be back, and onwards and upwards with Count Jack.”

After the group secured Count Jack two years ago, they sent him to trainer Brett Crawford.

“We’ve had horses with Brett Crawford before and he’s a great guy, he’s based in Cape Town and knows exactly what he’s doing,” Flanagan said. “He’s done a fabulous job with the horse; he’s not the easiest horse in the world, he’s quite a handful, but he’s obviously done a great job.”

Count Jack didn’t step out until after his third birthday last September, and after running fourth first out he graduated at Kenilworth on Oct. 29. He slipped back to fifth in a 1400 metre handicap two weeks later but bounced back to win a pair of handicaps over the CTS 1600 course and distance prior to Saturday’s mild upset win at 15/2.

“Brett was always high on this horse,” Flanagan said. “He gave him a bit of time but once he hit the track he hit it running. [Jockey] Pierre Corne Orffer, who is a great friend of mine who I used to pal around with when I worked for Mike de Kock in Durban, he gave the horse a great ride [on Saturday]. It’s good for a number of different reasons and everyone’s gotten a kick out of it.”

South Africa’s complicated equine export protocols have meant that yearling prices in the country have typically been capped, as it is difficult and expensive for buyers to export their purchases and for breeders to trade in foreign markets, but that element combined with a weak currency, on the flip side, has meant that shrew overseas shoppers can find horses at a premium with a good shot at making money racing locally.

It was announced last autumn, however, that purses at most of the country’s tracks would be slashed by an average of 13%. One of the country’s most important races, the G1 Sun Met also staged on Saturday, was among the races hit hardest, its purse dropped from R5-million to R3-million.

“I’ve been doing this four or five years now and I’ve only sent money down one time,” he said. “I think the cost to reward ratio racing a horse is actually very good there. The landscape is obviously changing with a couple guys no longer involved and different things happening politically, but it’s a good, fun place, and who doesn’t love winning races in Cape Town in the month of January? It provides a great platform for people to get into horses and enjoy it. I can’t see us not doing it again. It’s been a pretty sweet experience. It’s just a bloody great day.”