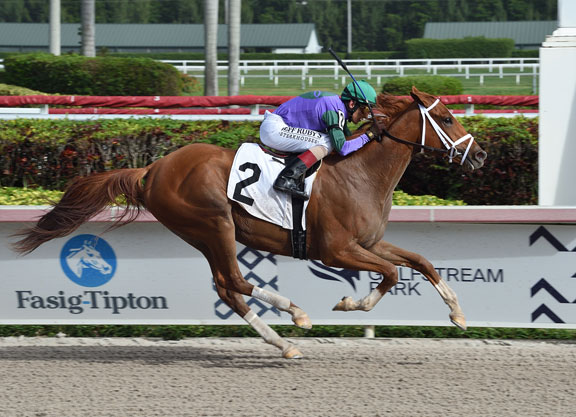 Pricey Into Mischief Colt Gets Going at Aqueduct…
1st-Aqueduct, $80K, Msw, 3yo/up, 6f, post time: 1:20 p.m. ET
ABSOLUTE COURAGE (Into Mischief) was the most expensive of 17 of his all-conquering stallion's offspring to sell as foals in 2018 when fetching $500,000 at KEENOV (the second-priciest was future 'TDN Rising Star' and GSW Mutasaabeq at $425,000). The half-brother to MSP Thanks Mr. Eidson (More Than Ready) found himself back in the Keeneland sales pavilion 10 months later, hammering for $800,000 to the bid of Courtlandt Farms. The Jan. 28 foal is out of an unraced daughter of GSW Profit Column (Private Account), the dam of GSW/GISP Final Round (Storm Cat) and SW Countess Curlin (Curlin). Similarly, Supply and Demand (Exaggerator) was the most expensive weanling from the first crop of his Classic-winning stallion, selling for $230,000 at KEENOV in 2018. The gelding is out of a full-sister to MGSW/GISP Redeemed (Include). TJCIS PPs

Lothenbach Firster Looks Live in Keeneland Finale…
Owner Robert Lothenbach bought a dozen horses at the 2019 Keeneland September sale for $3,235,000, and FINE COTTON (Curlin) looks to repay some of his $450,000 investment in the Friday finale in Lexington. The May 1 foal is out of the unraced Carolina Cotton (Majesticperfection), who was purchased by Woodford Thoroughbreds for $370,000 with this filly in utero at KEENOV in 2017. Majesticperfection is the sire of Lothenbach's GISW Bell's the One. Fine Cotton's second dam includes Whatdreamsrmadeof (Graeme Hall), the Grade II-placed dam of MGISW Curalina (Curlin). TJCIS PPs