Freshman Sire Pearl Secret Off the Mark at Musselburgh 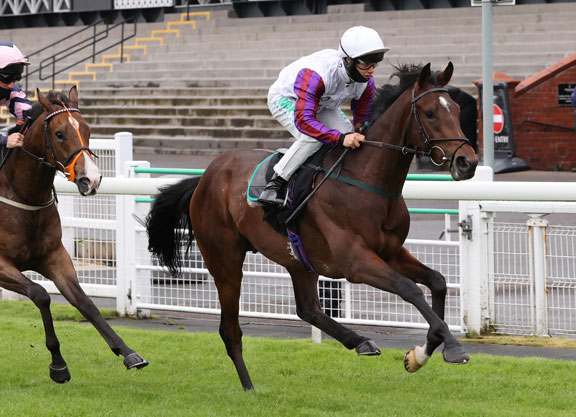 1st-Musselburgh, £6,400, Mdn, 7-1, 2yo, 5f 1yT, 1:00.09, gd.
DISCO BEATS (GB) (c, 2, Pearl Secret {GB}–Indigo Beat {GB}, by Tamayuz {GB}) was winless in two prior outings, going postward here as the 6-5 favourite coming back off a June 20 fifth at Ripon, and was sharply into stride from an outer gate to claim second along the stands’ side rail through the initial exchanges of this straight dash. Inching into a share of the lead soon after halfway, he came under sterner urging passing the furlong marker and was ridden out in the closing stages to assert by 1 1/4 lengths from Shawshank (GB) (Lethal Force {Ire}), becoming the first winner for his Chapel Stud-based freshman sire (by Compton Place {GB}). Half-brother to a yearling filly by Mondialiste (Ire), the February-foaled bay is the first of two foals produced by a half-sister to G3 Albany S. victress Habaayib (GB) (Royal Applause {GB}). Sales history: 26,000gns Wlg ’18 TATFOA; 20,000gns Ylg ’19 TATOCT. Lifetime Record: 3-1-0-1, $5,918.
O-John Dance; B-Aspire Stallions & Bloodstock Ltd (GB); T-John Quinn.