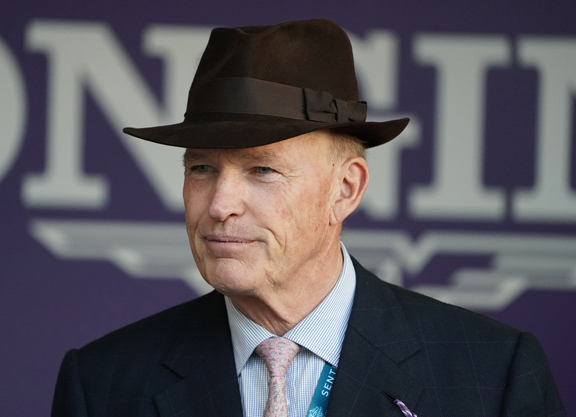 Three days after racking up yet another monumental win in a career chock full of them, legendary trainer John Gosden joined the TDN Writers' Room podcast presented by Keeneland Tuesday morning. Calling in via Zoom as the Green Group Guest of the Week, Gosden explained how he got Saudi Cup hero Mishriff (Ire) (Make Believe {GB}) to be as brilliant on dirt as he is on turf, what made his five-time champion Enable (GB) (Nathaniel {Ire}) such a phenomenon, how his roots of training in California in the 1980s informed the rest of his career and much more.

Asked about what it takes to get a horse to perform at a top level on multiple surfaces as Mishriff has done, Gosden said, “I think you've got to have the individual. You've got to have a horse that obviously handles the surface, but also the one that has the courage to face the kickback. And I think that's very much the issue. I had many good turf horses in California that could work a mile in a great time on the main track on their own in the morning, but put them in a race in the afternoon and they couldn't tolerate the dirt. They lose their breathing, their rhythm, everything. So, you need a horse with courage.”

Regarding what else made the difference for Mishriff against top American dirt horses Charlatan (Speightstown) and Knicks Go (Paynter) in the Saudi Cup, Gosden commented, “I think one thing is very clear, and I think Bob [Baffert] might have said this: the long straight at Riyadh made a big difference to us, because we are used to straights of two, three, four furlongs in distance. To that extent, he really relished the two-and-a-half furlong straight, which I think in the end just caught Charlatan out in that last 100 meters. So that type of track very much suits him.”

On what he's looking at for the rest of Mishriff's campaign and whether or not it will include a shot in the GI Breeders' Cup Classic, Gosden said, “We plan obviously to be running him here in races like the Eclipse Stakes. We may even consider looking at a race at the end of the year like The Arc. As regards to Del Mar, of course, that's to be discussed on the agenda. Having trained and had a lot of fun at Del Mar, I know it very well. The track and the finish line is quite a long way away from the clubhouse turn. It's quite a short straight. So that would probably be something that would be a positive for horses like Knicks Go and Charlatan and maybe not such a positive for us.”

Elsewhere on the show, the writers conducted their 2021 fantasy 3-year-old draft, checked in with TDN European Editor Emma Berry for more on the Saudi Cup and, in the West Point Thoroughbreds news segment, reacted to the huge news of three top stallion farms suing The Jockey Club over its 140-mare cap. Click here to watch the podcast; click here for the audio-only version.