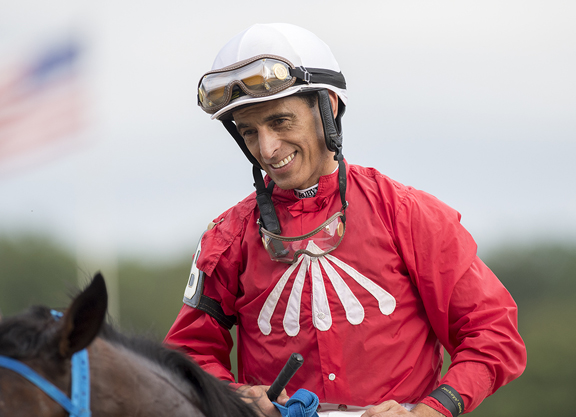 There's been a lot of attention, rightfully so, on Bob Baffert in the wake of his record-breaking seventh GI Kentucky Derby conquest Saturday. But John Velazquez made a little history of his own under the Twin Spires this weekend, becoming just the eighth jockey ever to win both the GI Kentucky Oaks and Derby in the same year. Wednesday, the Hall of Fame rider joined the TDN Writers' Room presented by J.P. Morgan Private Banking and Keeneland to talk Malathaat (Curlin), Medina Spirit (Protonico), his approach to race-riding, potential plans for when he retires and much more.

Calling in via Zoom as the Green Group Guest of the Week, Velazquez spoke about the winning Derby strategy to put Medina Spirit on the lead, saying, “He's pretty quick from the gate, so we had talked about it, but I got a text from Bob like five days before the race. He said, 'Man, the horse is doing well. He worked really good. I think you should come out of there running and go all or nothing.' I said, wait a minute Bob, I haven't studied the race yet. I had it in the back of my head [Rock Your World] would be on the lead. We talked that night and went through every horse and all their races … I'm inside of Rock Your World, he's far out [in the 14-post]. I'm going to come out running and if he wants to go to the lead, he's going to have to run much faster than me and use his horse going into the first turn. Obviously, he didn't break well, we got to the lead and the rest was history.”

As successful as Velazquez's Derby strategy was, he may have had even more to do with Malathaat's Oaks triumph. Not away all that well, he hustled his filly early to get into striking position in anticipation of a slow pace. Then, in a stretch battle with Search Results (Flatter), Velazquez moved his mount in just enough to intimidate her foe without knocking her off stride, locking up a narrow decision in the closing strides.

“Right out of the gate, it was not what I was expecting,” he said. “She didn't really jump out of there and kind of got squeezed from the first jump. I changed my mind right away. The horses that I don't want to be behind are in front of me, so I had to make a decision and try to get a position that I'm going to be comfortable with. My mind works so quickly and you have less than a second to think. I went all the way back to when I rode her mom [Dreaming of Julia, fourth as the favorite in the 2013 Oaks] and I got squeezed out of the gate and never recuperated. But she responded right away and got me to the position I wanted. Then coming down the lane, it was funny, because I thought it was going to be much tougher to get to Irad [Ortiz, on Search Results], but she got to him so quickly that when she put her head in front, she started waiting and wanting to lean on top of them. So now it's my job to control her and keep it as tight as I can, keep it competitive, but without bothering the other horse. She did everything I asked her to do. It's incredible when you ride these kinds of horses and on top of [their talent], they're giving you everything you ask for and being competitive.”

Elsewhere in the show, the writers broke down all the action from a loaded Derby weekend and asked cohost Jon Green about DJ Stable's experience with their first Derby starter. Then, in the West Point Thoroughbreds news segment, they reacted to federal attorneys' response to anti-HISA lawsuits and, in the Minnesota Racehorse Engagement Project Story of the Week, discussed the impact of Mattress Mack's $2.4-million Derby bet. Click here to watch the podcast; click here for the audio-only version.