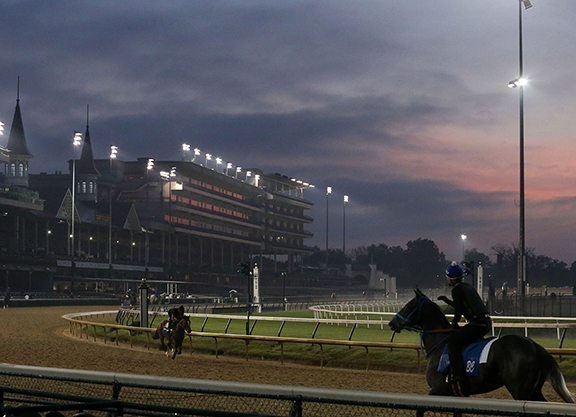 Our sport can, and should, always seek continuous improvement.

Take last Saturday, [May 23]'s first race at Churchill Downs as an example.

Trainer Thomas Drury Jr. had two starters in the race–Step Ten, making his career debut and Baby White Sox, who would make his first start for Drury, but his third start overall, having run twice for Joe Sharp in 2019, the last of those starts coming in mid-September.

While Step Ten is shown as having five published works, one most recently at Churchill and four at the Skylight Training Center, Baby White Sox's lines displayed just one work in his eight months away from the races, a half-mile breeze two weeks prior to the race. Without question, in the information provided to the public, Step Ten looks far more prepared for the race, and the public wagered accordingly.

The result was quite different than the public's expectations, however.

Baby White Sox sped away from the gate and led the field through strong fractions and faded slightly late, finishing third beaten only a length. Step Ten was never involved.

At best, Baby White Sox has blossomed into an improved horse given time and some class relief. At worst, it appears meaningful information about his preparation did not, for whatever reason, reach wagering customers who staked more than $1.6 million on bets involving the race. Now, there is nothing necessarily nefarious afoot in this situation–but even a casual observer would agree that it defies logic a 64-1 chance would run as well as Baby White Sox did off a single half-mile work over eight months.

The administrative rules in Kentucky require a horse off more than 45 days to record at least one workout–and that's it. See 810 KAR 4:030. Sec 3(8)(a). The rule needs to be revised.

Consider the other possibilities.

If Baby White Sox runs ninth in this race, beaten 14 lengths, most people don't notice a 64-1 shot finishing down the field. If Baby White Sox wins, such a performance off just a single published workout is eye-opening and an affront to all wagering customers. There would be plenty of outrage. But worse–what if Baby White Sox suffered a serious injury during the race? This would have been a textbook example used by racing's critics to demonize the sport and we would deserve it. Racing has endured problems for decades, but we shouldn't be walking into these traps in 2020.

A revision to the Kentucky Administrative Rules was proposed in February 2020, which would require that a veterinarian must certify that a horse entered to run “has been examined by an attending veterinarian licensed by the regulatory body in the jurisdiction where the examination occurs no more than three (3) days prior to entry; the attending veterinarian certifies in writing that the horse is in serviceable, sound racing condition…[and] shall include watching the horse jog in hand.”

Marc Guilfoil, Executive Director of the Kentucky Horse Racing Commission (KHRC), responded to tweets about this incident on May 23, as well as a similar one highlighted on May 21.

While no rule was violated, something which Director Guilfoil noted in both examples, the rule is clearly insufficient for racing in 2020. American racing needs to evolve. Continuing to accept a rule which would allow a single published workout from eight months away from the races is more indicative of a sport that is actually devolving. It seems like we don't care as much as we should–about our horses, about our betting customers and about those who are competing against Baby White Sox.

Director Guilfoil suggested we “get involved and propose a rule change.”

The Thoroughbred Idea Foundation is drafting a letter to the KHRC which will suggest a revision to the rule referenced above which is much closer to the rules applied in California regarding the requirements of multiple workouts for horses returning off layoffs of more than 60 days (two works) and 90 days (three works). Tackling methods to develop more proper reporting will also be suggested.

Change isn't easy. There will be issues with such a rule that need to be addressed–particularly, ensuring that works are appropriately recorded by independent outlets, not trainers themselves and “phoned-in.” There will be inconveniences that some horsemen will not like. These need to be managed and overcome.

If horse racing in America is going to publish workout information adjacent to factual information about past races, and if states require such information for a variety of reasons– notably welfare issues and public transparency due to wagering–then the information must be more complete and with as much accuracy as can be reasonably attained.

(And for now, yes, we are ignoring the incredibly salient argument that this sort of information should be automated with mandatory tracking devices).

Who would have thought a single half-mile workout at the Skylight Training Center could be so energizing?

You never know where you are going to find inspiration to improve a sport which not only needs it, but employs tens of thousands–across Kentucky and America–and has a massive economic impact. We all need to find these failings, highlight them and correct them. It won't be easy. We hope the KHRC will act on our letter upon its receipt and do so in the best interest of all.

For our horses. For our customers. For all our sport's stakeholders.

This is an abridged version of the Thoroughbred Idea Foundation release. To read the full version, click here.