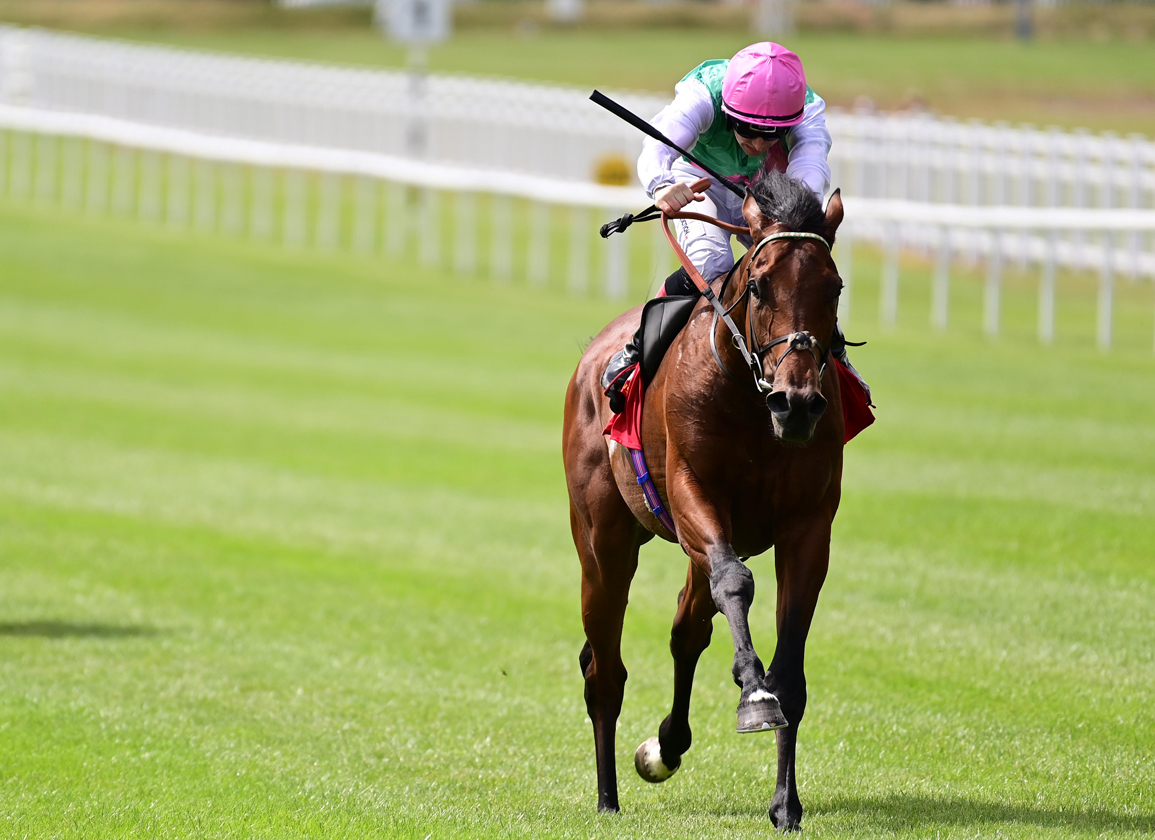 Saturday's G1 Dubai Duty Free Irish Derby had been teed up as a match between Westover (GB) (Frankel {GB}–Mirabilis, by Lear Fan) and Tuesday (Ire) (Galileo {Ire}), but in the ultimate assessment it was really a matter of no contest as Ralph Beckett's powerhouse colt overwhelmed all assembled for the Curragh Classic. Always travelling in a beautiful rhythm for Colin Keane granted a perfect lead by French Claim (Fr) (French Fifteen {Fr}), the 11-8 joint-favourite took control at the top of the straight and had already stretched into an unassailable lead by the furlong pole. All alone in the open space of the iconic Kildare venue thereafter, the Juddmonte homebred remained unperturbed as he drew out a seven-length winning margin to Piz Badile (Ire) (Ulysses {Ire}), with French Claim holding on for third a further two lengths behind. Tuesday managed fourth, but was never in it. “It was very straightforward and I have to say a big thankyou to Rob Hornby, who told me about the horse this morning,” Keane said. “He told me to just keep a lid on him going down and to keep it simple, as he gets the trip very well and will get further. He said not to be scared to make plenty of use of him turning in, as he would get to the line very well. To me, it felt like a piece of work with one horse in front of me.”

Westover may have been in the wake of Desert Crown (GB) (Nathaniel {Ire}) at Epsom, but his abundant progress from a narrow G3 Sandown Classic Trial success was there for all to see and his run through the race was the main talking point away from the impression made by the winner. Handed one of the worst draws possible for the mile-and-a-half Derby start, the imposing bay emerged from that disadvantage to put up a barnstorming effort which was profoundly disturbed by the well-documented trouble he met just as the Stoute colt was passing by and out of reach. A work-in-progress as a juvenile, his one attempt at black-type proved unsuccessful when second in deep ground in Pontefract's Listed Silver Tankard S. but it did show how relentless he is when he gets rolling.

This performance was the culmination of all that learning process and it is rare that a Classic of this stature could be predicted with such authority such a long way out. While Ryan Moore was too far behind to ever enter into a battle, there was little that could be done once Keane had taken up the position behind the race's surprise package French Claim. Watching the Juddmonte silks virtually motionless turning for home, it was clear that the writing was already on the wall and the rest of the straight was just an avenue for an exhibition of galloping to compare with the likes of Old Vic (GB), St Jovite, Zagreb, Montjeu (Ire), Sinndar (Ire), Galileo (Ire) and Jack Hobbs (GB) (Halling).

For Ralph Beckett, the win was a landmark one in his career training for the mighty breeding operation. “It is a hugely important moment for us–I can tell you where I was when I heard that Juddmonte were going to send us a draft and it's an honour and a joy to train for them,” he said. “It's a big day for us. This track suits him and it's wonderful to get it done. It was an effort we weren't expecting, so we are delighted. Everything had gone to plan–he had travelled over and settled in really well and it felt like we had got all our ducks in a row coming here and so it proved.”

“I was delighted with him at Epsom–it wasn't his or anybody's fault that he ran into traffic, but to do this today in the manner he did was very impressive. His brother [Fabilis] was exactly the same–he got better with racing and this horse will too. He has a great temperament and that shone through today. He's going to develop from three to four, never mind through the rest of the year, you would think. I'll have to discuss his next run with the family, but it's a good discussion to have. The King George is the obvious race for him, it's just whether we think it's the right thing for him at the time. The great thing is he's not ground-dependant–he'll handle slow ground as well. He's just very uncomplicated.”

Aidan O'Brien said of Tuesday, “It was a funny race and Ryan said she never got into it. The first, second and third sat there and noone made up any ground. I wouldn't take anything away from the first, second or third and the winner was very impressive, but we think she's better than that. We tried and competed and it didn't work today.”

Juddmonte Farms UK General Manager Simon Mockridge told Great British Racing International, “It was a scintillating performance by Westover, super impressive, and I know that Prince Khalid's family are ecstatic to have their first Classic win since he passed away early last year.

“Westover is from an amazing family which goes back to our [G1] Prix de Diane winner, Nebraska Tornado (Storm Cat), and is testament to Prince Khalid's 34 years of breeding expertise. The pedigree tells us that he should have an awful lot of speed, so don't be surprised if he comes back in distance–he looked like he could have won easily if today's race had been over 10 furlongs.

“Although we were very happy for him to finish in the first three at Epsom, when you watch the race back and see the job Rob Hornby had to do to extricate him, he did finish remarkably strongly. Even so, no one could have expected him to win in the style that he has today.

“He was a very big foal, weighing 154 pounds, so Ralph [Beckett] did an incredible job to get him to race as often as he did last year. Sadly, we lost his mother, Mirabilis, last year at the age of 19 because of a nasty foot problem, but she had one more foal, an Expert Eye (GB) now 2-year-old filly called Jalapa (GB), who is with Ralph but has yet to see a racecourse.”