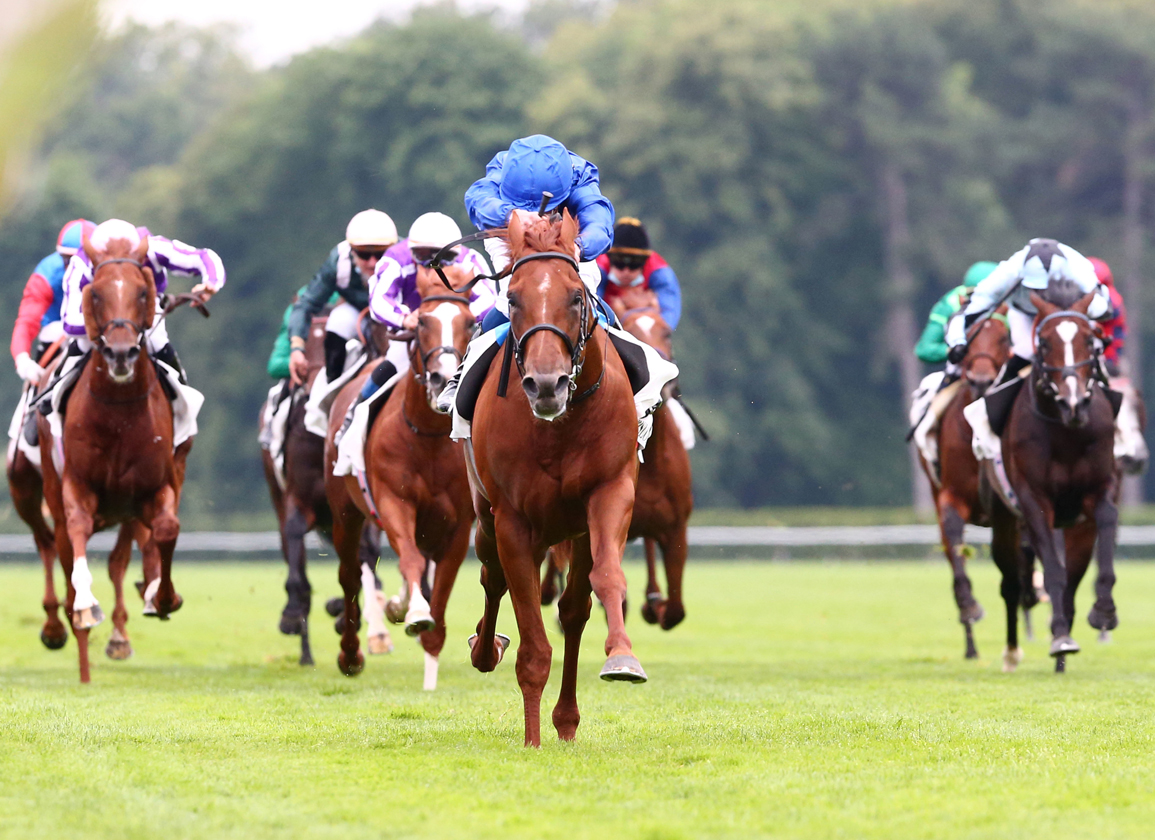 Unbeaten other than when losing both front shoes in the G1 Epsom Derby, Godolphin's Hurricane Lane (Ire) (Frankel {GB}) continued his rampage through the European calendar with an emphatic six-length success in Wednesday's G1 Grand Prix de Paris at Longchamp. Given a tow to the two-furlong marker by Ballydoyle's The Mediterranean (Ire) (Galileo {Ire}), the impressive G1 Irish Derby hero set sail by that rival there and powered to the line as Wordsworth (Ire) (Galileo {Ire}) followed him at almost the same distance as he had when third in the June 26 Curragh Classic. Third was the G2 King Edward VII S. winner Alenquer (Fr) (Adlerflug {Ger}), 1 1/4 lengths away with the best of the French being the fifth-placed Baby Rider (Fr) (Gleneagles {Ire}). “What a horse,” jockey William Buick said. “First of all, I'd like to thank France Galop and all the medical team for allowing us to come–we weren't quite sure we were going to make it on Monday with the situation, but they got us through. The horse is a superstar and it was very smooth, smoother than Ireland as there was a much better rhythm. For him, the pace felt normal which is the sign of a good horse and you could see from the 400-metre marker his turn of foot. He has a very good mind and is a beautiful horse. This track is perfect for him and he liked the ground, which is on the easy side of good–it's taken the rain very well–so I'm sure the team will consider him for the Arc in October.”

Now that Hurricane Lane has upped the ante, it will take a special performance from stablemate Adayar (Ire) (Frankel {GB}) in next Saturday's G1 King George VI and Queen Elizabeth Qipco S. to elbow him out of the picture for the Oct. 3 showpiece and send him to the G1 St Leger instead. Since changing distance in 2005, this has become a key stepping stone to the big one over the same course and distance but interestingly only the 2006 winner Rail Link (GB) has doubled up. Arguably none have entered this contest with the profile of Hurricane Lane and very few have exited with as much upside as the chestnut who eclipsed the wide-margin wins of Zambezi Sun (GB) (Dansili {GB}) in 2007 and Montmartre (Fr) (Montjeu {Ire}) the following year. ParisLongchamp was hit with 45mm of rain since the start of Tuesday and so he proved himself adaptable here, with his Irish Derby win coming on a lively surface.

Hurricane Lane's debut over a mile on heavy ground at Newmarket in October was the sole piece of evidence that he possessed Classic quality heading out of the winter, but he enhanced his credentials when staging a winning return in the Apr. 16 Newbury conditions event that has featured Enable (GB) (Nathaniel {Ire}), Star of Seville (GB) (Duke of Marmalade {Ire}) and Light Shift (Kingmambo) in recent times. Beating Maximal (GB) (Galileo {Ire}) and Tasman Bay (Fr) (Le Havre {Ire}) in that 10-furlong contest, he increased his stock with a gutsy display in York's G2 Dante S. over that trip May 13 before failing to give his true running at Epsom and finishing well adrift of Adayar and Mojo Star (Ire) (Sea the Stars {Ire}). Showing that to be an aberration, he left the latter for dead at The Curragh and it was the form of the Kildare highlight that shone through here with Wordsworth providing back-up.

Charlie Appleby has a quandary now as he plots the course of his two star 3-year-old colts. “He's obviously been a very exciting horse to deal with and he's only been beaten once in his life and that was in the Derby when I felt inexperience caught us out,” he said. “Today's performance has franked him as one of the best 3-year-olds in Europe and he's an exciting horse. As we always do, we'll allow the dust to settle but you would have to be thinking about him as a serious contender for the Arc. We'll give him a bit of a break now, because he's run in an English Derby, an Irish Derby and then backed it up two and a half weeks later in a Grand Prix de Paris.”

“He deserves to have a break, but whether he can give himself a break is another thing,” Appleby added. “He ran in the Grand Prix because he'd come out of the Irish Derby so well. He has a great constitution. He has a great mind and he shows his wellbeing in the mornings. A huge team effort goes into the way the horses are running at the moment and I'm delighted for his Highness Sheikh Mohammed.”

Olivier Peslier said of Wordsworth, who continued to build an admirably consistent profile in the race his full-brother Kew Gardens (Ire) won in 2018, “He has ran well, despite not taking me along early. I had to shake him along to get him to follow the winner, to make sure I didn't get caught for toe. After that, he was very courageous and put in an excellent effort to finish second. He will be better suited by something a bit longer like the St Leger. He needs a little time to get going, but he is quite talented.”

James Doyle said of Alenquer, “The draw wasn't ideal. As we know, it's not easy historically from the wide draw at Longchamp over a mile and a half. I rode him to come home and he's finished off very well. We were on the back foot a little bit and I had a little look up around the 800 metres out and I thought we had a bit of a mountain to climb. If the pace had held up, it would have given me a chance but they did sort of steady at halfway and made it very difficult for me to get into it. But I'm very proud of him, he's run a solid race and he's got the trip well.”