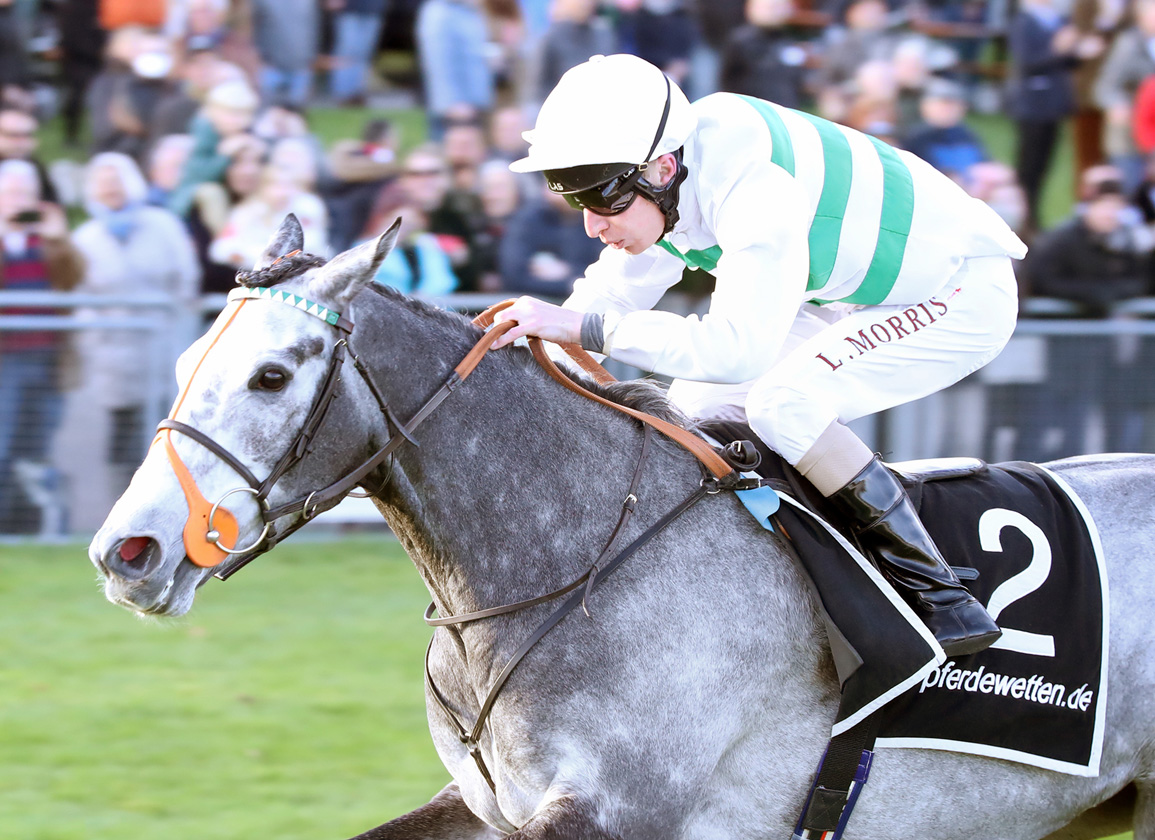 Kirsten Rausing's 4-year-old filly Alpinista (GB) (Frankel {GB}) had yet to taste defeat in four prior outings this term and lined up for Sunday's G1 Allianz Grosser Preis von Bayern at Munich coming back off wins in Hoppegarten's Aug. 8 G1 Grosser Preis von Berlin and Cologne's Sept. 26 G1 Preis von Europa last time. The homebred grey's second dam Albanova (GB) (Alzao), who was also conditioned by Sir Mark Prescott, had rattled off a trio of German Group 1 triumphs in a nine-week spree during 2004 and she emulated her grandmother's feat and stayed perfect for the year with a third elite-level triumph of her own in the 12-furlong feature. The vanquished at Berlin in that penultimate start included subsequent G1 Prix de l'Arc de Triomphe hero Torquator Tasso (Ger) (Adlerflug {Ger}) and the reopposing Nerium (Ire) (Camelot {GB}), who also finished second in the Preis von Europa. Alpinista recovered from an awkward stumble leaving the stalls and lobbed along under a taut rein, racing in a close-up second, passing the judge first time as old foe Nerium set the tone. In situ until turning for home, the 4-5 favourite was stoked into action for her challenge alongside G2 Prix Eugene Adam fourth Mendocino (Ger) (Adlerflug {Ger}) approaching the two pole and stayed on strongly under continued rousting in the closing stages to outlast that rival by 3/4-of-a-length in game fashion. Nerium kept on well once headed in early straight and finished one length adrift in third.

“We are absolutely delighted with the mare and winning three Group 1 races is terrific,” assistant trainer William Butler told Sport-Welt. “Alpinista has progressed throughout the year and has developed into a top-class stayer. Congratulations to Miss [Kirsten] Rausing for sending us this great horse and to Luke Morris for giving her a great ride.”

Sarah Steinberg was delighted with the progress of runner-up Mendocino. “That was a great performance today and a second-place finish is a just reward for building him up so patiently,” she told GaloppOnline. “We can be absolutely satisfied today and will definitely have a lot of fun with him next year.” Nerium's trainer Peter Schiergen added, “He ran well and his rider gave him every chance. The form of the race is solid and he will stay in training next year.”