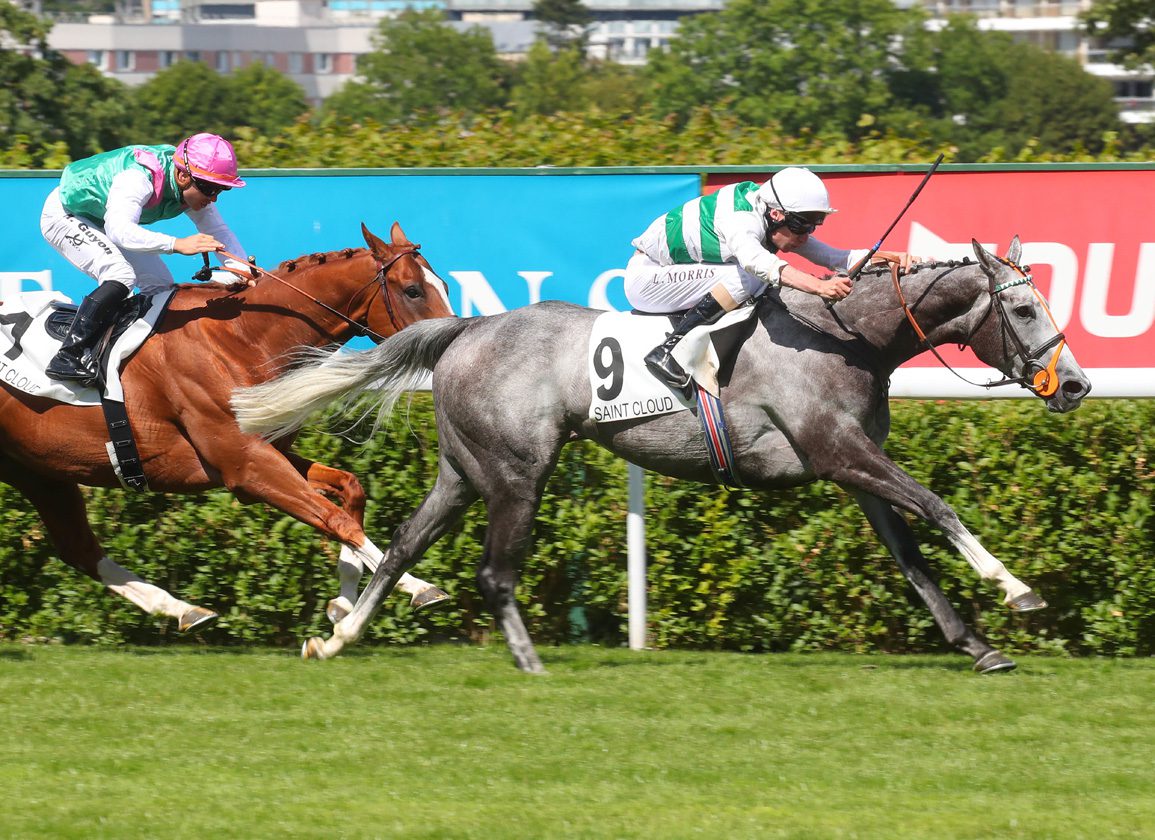 Kirsten Rausing's Alpinista (GB) (Frankel {GB}) was making her comeback in Sunday's G1 Grand Prix de Saint-Cloud, but there was no sign of rustiness as she overwhelmed a deep field for a fourth consecutive top-level victory. Now unbeaten in her last six starts including the G2 Lancashire Oaks, G1 Grosser Preis Von Berlin, G1 Preis Von Europa and G1 Grosser Preis Von Bayern, the Sir Mark Prescott-trained grey was held up early travelling notably strongly for Luke Morris in rear of mid-division. Unleashed wide at the top of the straight, the 8-1 shot rolled by the progressive Fabre trainee Baratti (GB) (Frankel {GB}) a furlong from home en route to a 1 1/4-length success, with Bubble Gift (Fr) (Nathaniel {Ire}) a neck away in third. There are worrying signs for connections of the 4-5 favourite Hurricane Lane (Ire) (Frankel {GB}), as he weakened in early straight and beat only one rival.

“She's taken a long time to come to hand this year, which is why she missed the Coronation Cup and I feel she's only just starting to come now, so I hope she can improve for the run and I think all roads will lead to the Arc,” Morris said. “We usually ride her very handy, but there looked to be a lot of pace in the race so on her first run of the year we said we'd take a chance and drop her in a bit more and see how she went. The gap came lovely and she produced a very good turn of foot. She beat Torquator Tasso last year and it was the decision between going to Germany for what looked a very easy group one or going for the Arc and we chose the easy option–this year we may aim a bit higher.”

Alpinista is arguably the best that Prescott has trained since her dual G1 Champion S.-winning relative Alborada (GB) (Alzao), but she has taken time to reach full maturity and fulfil her potential. Since registering her first black-type win in Salisbury's Listed Upavon Fillies' S. in August 2020, the only rivals to have taken her measure have been Love (Ire) (Galileo {Ire}) in the G1 Yorkshire Oaks shortly after and Antonia De Vega (Ire) (Lope De Vega {Ire}) in the G3 Princess Royal S. at Newmarket the following month. “It was a faultless performance wasn't it really? She wouldn't come in her coat in the Spring and wasn't at a stage where she could run,” her trainer said. “She's just come right now and to be honest I thought the race might come 10 days too soon for her, but it's worked out very well. You would hope she could improve a tiny bit more.”

“We'll see what Miss Rausing feels, but I would think one run before the Arc, probably, and conventionally you'd go for the Prix Vermeille–that would be the obvious race,” Prescott added. “I don't see any reason to be a clever Dick, I think you just go with the obvious and hope she's good enough to do it.” Juddmonte's Barry Mahon said of Baratti, “He has run a great race. Andre Fabre has always said he is a good horse and he has had a few setbacks, including one before the Hardwicke but we now have a good horse for the second half of the season.”

Alpinista is the first foal out of the listed scorer Alwilda (GB) (Hernando {Fr}), who is one of four black-type winners out of the family's initial triple German group 1 winner Albanova (GB) (Alzao). The others are the group 3 scorer Algometer (GB) (Archipenko), the listed scorer and group 3-placed Alignak (GB) (Sea The Moon {Ger}) and the triple French listed winner All At Sea (GB) (Sea The Stars {Ire}) who is in turn the dam of this year's G2 Queen's Vase winner Eldar Eldarov (GB) (Dubawi {Ire}).