Frankel's Alpinista In Command In Berlin 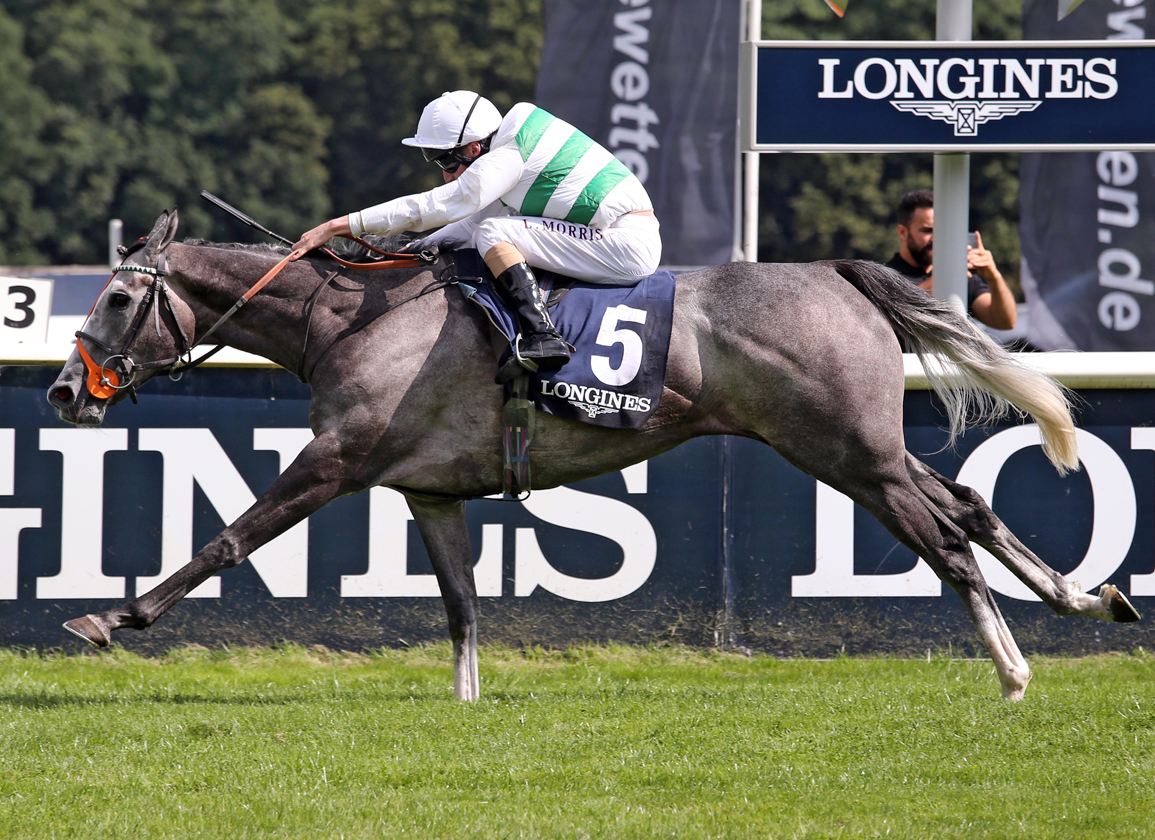 Coping with easy ground well enough to record a workmanlike success in the G2 Lancashire Oaks at Haydock last time July 3, Alpinista (GB) (Frankel {GB}) relished the slicker surface available at a sun-baked Hoppegarten to continue her owner-breeder Kirsten Rausing's annus mirabilis by garnering Sunday's G1 Longines 131st Grosser Preis von Berlin. Settled fourth early by Luke Morris as Godolphin's G2 Dubai City of Gold scorer Walton Street (GB) (Cape Cross {Ire}) cut out the running, the 19-5 shot was launched in early straight to swamp her neighbour passing the 300-metre marker. Pulling clear on the run to the line, the grey had an authoritative 2 3/4-length margin to spare over last year's winner and 9-5 favourite Torquator Tasso (Ger) (Adlerflug {Ger}) there, with Walton Street ending up third a length away. “I was very pleased with her, she stays really, really well,” trainer Sir Mark Prescott said. “She wasn't going particularly well early on, turning in she was perhaps going less well than anything but for two but she stuck on really well and I was enormously pleased with her.”

Alpinista was emulating the achievement of her second dam Albanova (GB) (Alzao) in registering a top-level victory in Germany and she has two more to annexe to match the treble achieved by her predecessor in the 2004 G1 Deutschlandpreis, G1 Rheinland-Pokal and G1 Preis von Europa. She is certainly capable of that based on all known evidence since bursting onto the scene a year ago with a clear-cut success on firm going in Salisbury's 10-furlong Listed Upavon Fillies' S. a week prior to chasing home Love (Ire) (Galileo {Ire}) when second in the G1 Yorkshire Oaks. Kept at this mile-and-a-half trip thereafter, she was a touch below-par when runner-up in the G3 Princess Royal S. at Newmarket on her 3-year-old finale in September and also when gaining a narrow verdict in the Listed Daisy Warwick Fillies' S. at Goodwood on her return Apr. 30. Even in the Lancashire Oaks, where the soft ground was against her, she was unconvincing dealing with the 3-year-old Lady Hayes (Ire) (Kodiac {GB}) but this tour de force confirmed her effectiveness when conditions are right.

“Obviously Miss Rausing has a big say in it, but I think we have probably sort of earmarked the [G1] Preis Von Europa at Cologne on September 26 and we'll just see if something comes in between,” Prescott added. “She had Albanova with me a few years ago, Albanova won this and that race, so we might follow the same pattern because of course they are very closely related. It's just interesting that she should follow in the hoofprints. She stays really well this filly, she would go a bit further if we had to.”

Kirsten Rausing commented, “In numerical terms, it's my best season so far. That's 23 winners in my own colours to date and that is the same as my best ever year, which was 2011, but obviously that was by the end of the season. Out of the 23 wins, we have eight black-type wins this year: a group 1, two group 2s, a group 3 and four listeds. It's fantastic, all my ships are coming in, it happens every 25 years or so.”

Of Alpinista, she added, “We always thought she was pretty good. She's possibly improved from three to four, but the ability was always there from her two-year-old days. I think she's very typical of the family in that she is very brave. Her illustrious ancestress Albanova, her granddam, could do the same, and of course her own sister Alborada was particularly brave, only small, but very brave. Alpinista is longer–physically to look at she perhaps isn't as beautiful as some of them, but I'm absolutely not in any way denigrating her!”

“The main job is done now. It's a lot to ask of her to run in the Yorkshire Oaks again,” she concluded. “The journey to Berlin is long, it's two days in either direction, so I wouldn't mind letting her have a break, but she will tell us what she wants to do, I'm sure. She is not an easy mare to mate externally, being by Frankel, but of course I have just the right horse for her at home, Study of Man, but we won't decide about that until she's run her last race.”

Alpinista, who becomes Frankel's 18th group 1 winner, is the first foal out of Alwilda (GB) (Hernando {Fr}) who raced for these connections and gained her black-type success in this country in the Listed Silbernes Band over two mile and an extended three furlongs. She is one of four black-type winners out of the aforementioned Albanova including the G3 Dubai Duty Free Legacy Cup scorer Algometer (GB) (Archipenko) and the triple listed scorer All At Sea (GB) (Sea the Stars {Ire}). The listed-winning third dam Alouette (GB) (Darshaan {GB}), who is best known for producing Albanova's full-sister Alborada (GB) who provided these connections with two renewals of the G1 Champion S., is kin to the G3 Doncaster Cup winner Alleluia (GB) Caerleon). She is the dam of the G1 Prix Royal-Oak heroine Allegretto (Ire) (Galileo {Ire}) and the G2 Nassau S. winner Last Second (Ire) also by Alzao who in turn was responsible for the G1 Poule d'Essai des Poulians hero and sire Aussie Rules. Alwilda's unraced 2-year-old filly by Kendargent (Fr) named Alpenblume (GB) is also in training with Prescott, while she is in foal to Iffraaj (GB).