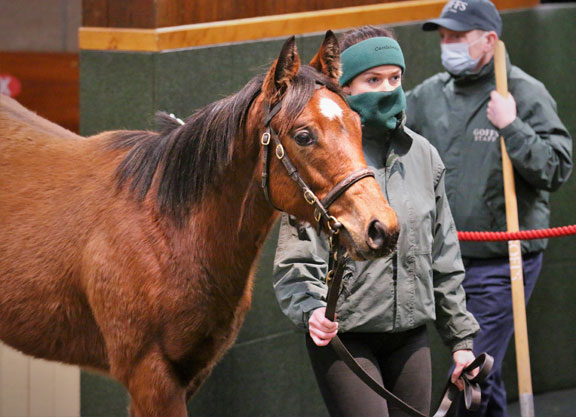 KILDARE, Ireland–It was a case of saving the best until last as the Goffs November Foal Sale finished with a flourish on Sunday evening. Despite a few high-profile withdrawals, there were still plenty of highly sought after lots on offer and it was three foals by Frankel (GB) who shared the honour of co-top lots with each commanding €440,000. While there may not have been the depth of trade evident in previous editions, the session was underpinned by a solid clearance rate of 82%, with 135 foals sold for a total of €10,374,000. The average for the day was €76,844, while a median price of €52,000 was recorded. There were 47 six-figure transactions on day three last year's record sale, and 28 on Sunday.

Frankel fever began to set in around mid-afternoon and it was ignited by the sale of the supplementary lot 663A. The brilliant Juddmonte stallion sired Grenadier Guards (Jpn), the winner of the G1 Asahi Hai Futurity in Japan on Sunday morning, and that fact wasn't lost on Harry Sweeney, who signed the buyer's docket. The son of the multiple stakes winner Lily's Angel (Ire) (Dark Angel {Ire}) will make his way to Sweeney's Paca Paca Farm in Japan where Sweeney hopes he will build on his sire's impressive record.

“Frankel has been quite successful in Japan; they are big strong horses and they seem to operate well there,” Sweeney said. “I hoped to get this one for slightly less but he is a fine foal and we look forward to getting him home.”

It was an intense half hour for Swordlestown Little as no sooner had the dust settled on lot 673 than they were back in the ring with another Frankel colt, lot 684. This colt was bred by Leadon and Klay out of Nisriyna (Ire) (Intikhab) and completed the Frankel €440,000 trifecta, this time to the bid of Juddmonte's Barry Mahon. The 13-year-old Nisriyna has been a star for Swordlestown Little and is the dam of the former prolific Hong Kong runner Dinozzo (Ire) (Lilbourne Lad {Ire}), who after amassing over £1.1-million in his racing career was repatriated back to Swordlestown Little to spend an honourable retirement.

“It's been some rollercoaster,” said Leadon after the second of his headline sales. “We think the world of this Nisriyna colt, he looks a proper racehorse and he really took to this new environment like a duck to water. Nothing seems to faze him. It's a wonderful family and the mare really deserved an upgrade in the type of stallion she was visiting. We were delighted that her 2-year-old Qaasid (Ire) (Awtaad {Ire}) recently got off the mark for Sir Michael Stoute, who is a dear friend of ours, and we are thrilled that Juddmonte have bought this foal.”

Barry Mahon had been underbidder on an Expert Eye (GB) foal earlier in the session and was determined not to leave without this one. “Prince Khalid was very keen on this colt and he looks a good fit for the Juddmonte programme,” Mahon said. “He also came from a top farm and was beautifully prepped. Frankel has become a true international sire with the horse in Japan this morning another example of what he can do and it's great for Irish breeders who have supported him to be rewarded like this.”

In a flurry of Frankel sales, lot 685 rewarded the perseverance of successful buyer Gerard Lowry of Oneliner Stables. Lowry had tried hard to buy the previous lot but was more than happy to come away with this son of Noyelles (Ire) (Docksider) when the hammer dropped at €360,000. Similarly bred to the first Frankel sold being a half-brother to Lily's Angel (Ire) (Dark Angel {Ire}), this colt was consigned by Neilstown Stud on behalf of the foal's breeders Nick and Alice Nugent.

“Both Frankels were top of our list so we're delighted to get this one,” Gerard Lowry said. “Frankel is a global commodity, this horse is a half-brother to two good fillies and he will be back for resale next year.”

There may not have been as much international representation as in previous years at this sale, but that didn't prevent Goffs Scandinavian agent Filip Zwicky getting stuck in on behalf of clients. His purchases were headed by lot 707, a Footstepsinthesand (GB) half-brother to G1 Keeneland Phoenix S. winner Lucky Vega (Ire) (Lope De Vega {Ire}) that cost €300,000. Consigned by Baroda Stud, the colt is a grandson of G1 Prix de l'Opera winner Satwa Queen (Fr) (Muhtathir {GB}), and while bought for Scandinavian interests he will be making an appearance at Goffs again next year.

“I bought him for the owner of Swedish Derby winner Bullof Wall Street (Tapizar), who we bought in the Orby two years ago,” Zwicky said. “This is the owner's first pinhook and the horse will come back here for the Orby next year.”

Philipp Stauffenberg is another who is no stranger to paying big money for foals to resell and more often than not the gamble pays off. He struck for lot 659, a No Nay Never full-sister to both GII Mrs Revere S. winner Nay Lady Nay (Ire) and G2 Coventry S. winner Arizona (Ire). The Ballintry Stud-consigned filly set Stauffenberg back €260,000, but with a pedigree that also features two individual champions further down in Bright Generation (Ire) (Rainbow Quest) and Dabirsim (Fr) (Hat Trick {Jpn}), the filly looks well bought. Bred by Stephen Sullivan out of Lady Ederle (English Channel), the sale is the latest success story for the mare that keeps on giving. Sullivan bought the mare in Keeneland eight years ago for $27,000 and is beginning to really reap the rewards from the 11-year-old.

“I'm delighted, Lady Ederle is turning into a real cash cow but all credit to Joe [Rogers] and his team at Ballintry Stud,” Sullivan said. “He looks after the foals so well and I would recommend him to anyone. The mare is in foal to Frankel (GB) and I imagine we'll see that foal back here hopefully next year. Goffs do a great job and despite everything happening we are here trading horses.”

Lot 583 from The Castlebridge Consignment already had good credentials being an Acclamation (GB) half-brother to two fast stakes horses in K Club (Ire) (Kodiac {GB}) and Back To Brussels (Ire) (Starspangledbannner {Aus}), but there could be more to come from the family next year particularly from a yearling half-sister by Mehmas (Ire) that cost £330,000 at the Orby Sale in Doncaster and goes into training with Joseph O'Brien. That was surely at the forefront of JC Bloodstock's Mick Fitzpatrick's mind as he traded bids with Gay O'Callaghan with Fitzpatrick eventually winning the battle with a bid of €195,000. The foal was bred by Horse Racing Ireland Chairman Nick Hartery out of the mare Big Boned (Street Sense), who has proved a fine investment since being purchased at Goffs in 2014 by Rathasker Stud for €27,000.

Mick Fitzpatrick added to Kilminfoyle's pinhooking squad for next year when seeing off a parade ring bidder to secure lot 603 for €225,000. The strapping Camelot (GB) colt offered by Oghill House Stud is a full-brother to the very smart Ado McGuinness- trained Current Option (Ire) and Fitzpatrick said, “He is a very nice foal by a proven stallion and is a brother to a good horse so he ticks plenty of boxes.”

For the foal's breeder Craig English it was a fine return as he only bought the mare Coppertop (Ire) (Exceed And Excel {Aus}) at this sale last year for €50,000. She was carrying this foal at the time and in the meantime Current Option (Ire) has won a premier handicap at Galway, a listed race at Cork and the G3 Concorde S. at Tipperary, exploits which have seen his rating climb to 107.

Another Camelot (GB) foal to find favour was lot 708. Bred by Kilcarn Stud, the full-sister to stakes winner Fighting Irish (Ire) was bought by Peter and Ross Doyle for €185,000. Camelot's popularity was again evident when Oaklawn Stud's filly, lot 735, was bought by Highbank Stud for €190,000.

Former Curragh trainer Takashi Kodama stepped in to purchase lot 649 on behalf of Japan's Big Red Farm. The Irish National Stud-consigned son of Invincible Spirit (Ire) cost €210,000 and is a half-brother to a pair of stakes winners by Sea The Stars (Ire) in Chemical Charge (Ire) and Dalgarno (Fr), while the early pace was set by a son of Kodiac (GB) bought by the Tally-Ho team for €190,000. Bred by Michael Ryan and consigned by his Dungarvan-based Al Eile Stud, lot 567 is a grandson of Ryan's brilliant dual 1000 Guineas winner Finsceal Beo (Ire) (Mr Greely) and out of the winning Galileo mare An Cailin Orga (Ire).

The Goffs November Sale and indeed the reshuffled Irish 2020 sales calendar culminates with the single-session breeding stock sale which begins at 10 a.m. on Monday.