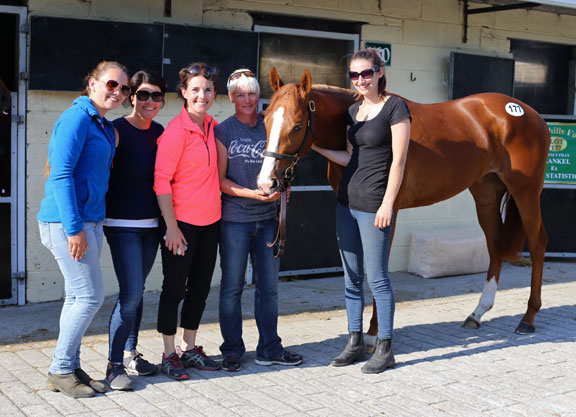 After a decade of sustained growth that culminated in a record sale last year, a certain amount of trepidation was in the air before the Goresbridge Breeze-Up Sale kicked off on Friday. This trepidation was largely due to an increased catalogue and overall patchy trade that has been evident at some other breeze-up sales this year, but on this occasion trade by and large remained buoyant with plenty of activity, as predicted, at the top end.

When a Frankel (GB) juvenile out of a stakes-winning mare clocks a very fast breeze, it is quite likely that offering will come at a premium, and it was no surprise that lot 177, offered by Katie Walsh's Greenhills Farm, took centre stage when selling for a sale record of €315,000.

Considering the general patchiness of the European breeze-up market this year, it must be considered satisfying that Goresbridge's figures largely matched the major gains made last year. At the close of trade, 135 were sold at a clearance rate of 78%, which was well below the remarkable 85.5% clearance rate posted a year ago. The average and median, however, were nearly exactly on par at €34,033 and €20,000, respectively.

When bloodstock agent Stephen Hillen opened the bidding on the Frankel filly out of Vital Statistics (GB) (Indian Ridge {Ire}) at €200,000, it was clear he meant business, and when the bidding reached €300,000 Hillen was still in the box seat. Aidan O'Ryan made a late play when he raised the bid to €310,000, but Hillen had enough in the tank to seal the deal with an extra €5,000 before commenting, “I thought she was probably good value at that price and she deserved to make it. She still looks a bit raw but she did a serious time and did it within herself so she seems to have plenty of ability.”

Hillen was acting for an established but undisclosed client and the sale was culminating a very successful breeze-up season for Katie Walsh, whose day began on a high by selling lot 19 for €200,000 to BBA Ireland.

O'Callaghan Continues to Stock Up…

Michael O'Callaghan has enjoyed good success with his Goresbridge purchases in the past, and having been active at the upper end at previous sales earlier in the spring, The Curragh-based trainer was again stocking up with talent on Friday. Topping his acquisitions was lot 142, a colt by Slade Power (Ire) offered by Norman Williamson's Oak Tree Farm and purchased by O'Callaghan for €220,000. Having outbid Adam Driver for the Jacqui Norris-bred bay, O'Callaghan said, “It was my last bid so luckily it prevailed. He was my pick of the sale from a physical point of view, he did the third-fastest breeze and he vetted well, so we were determined to get him. We'll probably sell a few shares in him but he will more than likely carry my father's colours.”

For Norman Williamson the sale represented a fine pinhook with the former top jockey having purchased the colt for €45,000 at Goffs last year. Williamson was not surprised he sold well and said, “He breezed like a bullet, he's a lovely horse.” O'Callaghan runs two juveniles in Saturday's Listed Marble Hill S. at The Curragh, and among his other purchases on Friday were lot 33, a filly by Dark Angel (Ire) that cost €56,000 and lot 60, a colt by Helmet (Aus) that went for €75,000.

BBA Ireland were responsible for the top lot last year when Eamonn Reilly bid €210,000 for Landshark (GB) (Bated Breath {GB}), but it was the agency's Mick Donohoe who was the successful bidder on this occasion when signing for another 2-year-old by the same Juddmonte sire for €200,000. Lot 19 was offered by Katie Walsh's Greenhills Farm and holds the distinction of being a half-sister to a Grade I winner in Wood Memorial S. victor Bellamy Road (Concerto). After fending off a determined effort by Will Johnson of De Burgh Equine, Donohoe indicated that foreign shores beckoned for the filly. “I've bought her for a new client from the Middle East. He's based in Dubai but this filly will go to Jebel Ali to be trained. She clocked a fast breeze for a filly that looks like she will improve over time and her pedigree suggests she could handle the dirt as well,” he said.

Donohoe made another six-figure purchase later in the day when going to €120,000 to acquire a Starspangledbanner (Aus) filly from Brown Island Stables, offered as lot 162. Johnny Collins is no stranger to adding value to yearlings and this was another example with the chestnut, out of the stakes-winning dam Noisy Feet (Tapit), an 18,000gns buy at Tattersalls last year. Collins also had reason for cheer when his lot 126, a colt by Exceed And Excel (Aus), was bought by De Burgh Equine for €190,000. According to the agency's Will Johnson, the colt will be joining Roger Varian in Newmarket.

With the owner of last year's topper, Bob Edwards of e5 Racing, in town to support his Guineas runner, there was a strong likelihood that he would not leave Goresbridge empty handed, and that eventuality was realized when Eamonn Reilly of BBA Ireland signed for lot 130 on behalf of Edwards for €140,000. The colt by Society Rock (Ire) was offered by his breeder Tally-Ho Stud, and will be starting his career stateside unlike Edwards's purchase last year, who went to Jessica Harrington. “He's going straight to the East Coast but I'm not sure who'll train him yet,” Edwards said. “He was an obvious one to target, he is a great physical and he is the one I really wanted from the sale so I'm delighted. It's gorgeous over here, and I'm looking forward to the weekend,” he added.

Lot 125 had the distinction of being the final 2-year-old by Scat Daddy to be offered at public auction, and the Mocklershill offered filly, purchased for $150,000 at Keeneland last year, was always going to attract attention. Ultimately, it was the locally based breeder John Lenihan of Ballyogue Stud who won the battle for the almost black filly when bidding stopped at €200,000.

Driver Returns To The Well…

Adam Driver, another Goresbridge regular, fought off strong competition from Dubai-based trainer Rashed Boursely for lot 91, eventually delivering the winning bid of €180,000. The colt by Quality Road was offered by Mayfield Stables, having been purchased by SackvilleDonald for £50,000 at Goffs UK last August.

Driver has purchased some high-value horses at Goresbridge in the last five years and said, “He is a lovely colt and he is for the same client as I have purchased for here before. He loves this sale and asks me to come here for him each year as he has had some luck here also. This colt will go to Jo Fenton in Newmarket first, she handles all my spelling and pre-training and when he settles in with Jo we will decide who he will go to to be trained.”

The Gittins family bought the sale topper at this sale two years ago and Mark Gittins was back in action acting on behalf of his mother Maura when buying lot 67 for €105,000. The Siyouni (Fr) colt offered by Brendan Holland's Grove Stud was purchased by Holland for €37,000 at Arqana last year and a smart breeze and a hot sire ensured a decent profit mas made. “He's for my mother and will go to Karl Burke,” Gittins said. “He is a nice, straightforward colt who was well presented and came highly recommended by a very good consignor.”

With No Nay Never having made such a promising start to his stallion career it was always likely that the sole offering in the sale by the Coolmore sire would be popular, and the Ardglas Stables duo of Ambrose O'Mullane and Mary Reynolds made a handsome return on the €20,000 it cost them to buy lot 72 at Arqana last year when Rabbah Bloodstock signed the docket yesterday at €80,000. “He's a good horse and he will train on into a better 3-year-old and I think he will get a mile as well,” said O'Mullane afterwards. “The market is tricky enough and the sire certainly helped, I might never get another one by him again.”

Mark Hoare of Pacific Bloodstock made the long journey from Victoria in Australia worthwhile when acquiring a strong Oasis Dream (GB) colt offered by Oak Tree Farm. Hoare spent €72,000 on lot 45, and if everything goes to plan with his vaccinations the colt could be boarding a flight to Australia on June 15 to join the string of Darren Weir. “We hatched this plan about six weeks ago,” Hoare said. “He was one of two colts I had picked out and I am very pleased to get him. He may have been slightly over budget but being by Oasis Dream I thought he was worth stretching for. He is for a syndicate that myself and Darren [Weir] have put together, consisting of a group of his owners and a number of my own clients.” Hoare is the first Australian to have purchased at Goresbridge and regarding his out-of-the-box thinking he said, “You have to be flexible in this game. I may not be a household name in Australia but I like these kinds of projects and hopefully it will work out well.”

Goresbridge boss Martin Donohoe had no complaints after another successful edition and said, “We're very happy. It's great to see so many high-priced horses and also to see plenty of horses going to so many overseas markets from Australia to America to the Middle East and various countries in Europe. The market hasn't been straightforward this year so for that reason we would have to be delighted.”