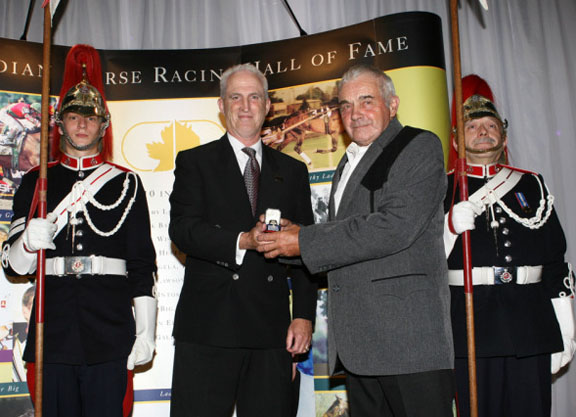 Jockey-turned-trainer Frank Barroby has been named the recipient of the 2019 Avelino Gomez Memorial Award for his contributions to Canadian jockeydom and the sport. Barroby competed against Gomez during two seasons at Woodbine.
“I thought a lot of Avelino,” Barroby said. “He was kind of a showy guy and just as good a rider as I’ve ever seen. When he was on a horse, and he wanted them to pick it up, you could see them extend themselves.”
Barroby, a 75-year-old Saskatchewan native, earned his first win as a jockey at Assiniboia Downs in 1961. He rode the prairie circuit–Calgary, Edmonton, Lethbridge, Saskatoon and Regina–and won riding titles in four provinces, Manitoba, Saskatchewan, Alberta and British Columbia. When he rode at Woodbine for two years in the mid-1960s, he was nicknamed “King of the Bullrings.” In 1968, he moved back to Vancouver to ride for top owner Peter Redekop and he was leading rider in his first year at Hastings Park.
He retired from riding in 1976 and became a top trainer, earning titles in 1986, 1990 and 1993. In 2010, Barroby was the first B.C.-based trainer to be inducted into the Canadian Horse Racing Hall of Fame. Currently with 976 wins as a trainer, he maintains a stable of 13.
The Avelino Gomez award is presented every year at Woodbine on Woodbine Oaks day (June 8 this year). A life-sized statue of Gomez overlooks the walking ring at Woodbine.