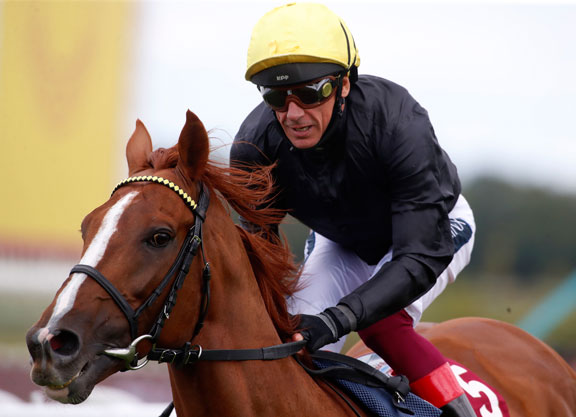 From 4 a.m. on Saturday, travelers coming into the UK from France will be required to quarantine for 14 days. Horse people wanting to take in both this weekend's Deauville meeting-featuring the G1 Prix Jacques le Marois on Sunday–and next week's York Ebor meeting, therefore, have some decisions to make, and Frankie Dettori has chosen the French route with mounts booked on John Gosden's unbeaten G1 St James's Palace S. winner Palace Pier (GB) (Kingman {GB}) in the Marois and G1 Prix du Jockey Club winner Mishriff (Ire) (Make Believe {GB}) in the G2 Prix Guillaume D'Ornano on Saturday.

“Frankie will be riding in France–that is the intention, absolutely,” said Gosden. “It will mean he will miss York. These plans have been in place for a while–for Palace Pier since the St James's Palace and for Mishriff since the Prix du Jockey Club. [Dettori] would prefer to ride this weekend. It is far from ideal to miss York, but these are strange times that we live in.”

Dettori said on Friday morning, “Obviously I only found out at 10 p.m. last night. This morning I spoke at length with John, and I decided to go to France. With Enable not running and Stradivarius not running at York, it made my decision a lot easier. Obviously Lord North is a good horse, and I'll be missing him, but the prize money in France is unbelievable.

“I had to make a decision–they are two very good horses [Palace Pier and Mishriff], and I've decided to go to France instead. Of course I'm gutted to be missing York, but I can't stop the government doing what they want to do.”

Gosden said he hopes James Doyle will be available to renew his association with Lord North. It was Doyle who was aboard the 4-year-old gelding for his 3 3/4-length win at Royal Ascot.

A statement from the British Horseracing Authority acknowledged that any horse people returning to the UK from France would need to quarantine or go the route of “elite athlete exemption,” which would still require a minimum of seven days on the sidelines.

“Any jockey, trainer or member of stable staff wishing to participate in a French fixture [after 4 a.m. on Saturday] will either have to self-isolate for 14 days on return, or elect to use the elite athlete exemption which requires undergoing two Covid-19 tests upon return to the UK. The first test should be taken as soon as is possible following return to the UK and a second test seven days on from return to the UK. Both test results will have to be negative and the participant would also have to satisfy any other requirements that the BHA's medical department may impose as part of a risk assessment process, such as being interviewed and providing details of accommodation and other movements whilst overseas. The BHA reserves the right to prevent the participant from returning to a race fixture in Great Britain until the full 14-day self-isolation period is up should there be any concerns regarding potential transmission of the virus.

“The BHA has been assisting participants this week who have been considering riding in France in the near future, and will be publishing a full protocol for all participants considering travelling to countries without a travel corridor as soon as possible to assist in their planning.”